Inspiration can come from a host of places. For Hahna Kunkel, inspiration came from singer Lana Del Rey. “Her music videos are so dreamy,” Hahna says. “This house was dreamy.”

The house is Laurel Court, located in College Hill, and it has loads of historic charm. It was previously the home of Champion Paper mogul Peter G. Thompson, then later the residence of the Archbishop of Cincinnati. “I didn’t even see the venue until the day before the wedding,” Jerome says. “But I walked in, and I just said, ‘I get it.’ ”

Laurel Court provided the perfect backdrop for Hahna’s and Jerome’s wedding celebration (June 16, 2018), even before the ceremony began. “The areas that are specifically for the bridesmaids and groomsmen are really cool,” Jerome says. “The room for the guys had a pool table. You could take pictures there and look like you’re on the set of Mad Men.”

Beyond all of its apparent charm, the home continued to surprise them. In the room where the Kunkels set up their cake, Hahna’s cousin found a piano and sat down to play. “It was designed acoustically so that the Bishop could have small choirs in there and it would fill the house,” Jerome says. “The music filled the entire house. It was this incredible, beautiful moment.”

And entertainment was something Hahna and Jerome felt strongly about for their wedding guests. For Hahna it was in the form of a string trio for the ceremony, which played a mix of classical and pop music. For Jerome, the food had to be perfect. “We thought people would enjoy a pasta bar, so they could create their own dinner,” he says. With a cadre of nieces and nephews in attendance, Jerome wanted the reception to feel less formal. “It was so fun,” he says. “My niece was dropping spaghetti into her mouth, having a great time.”

Now residents of San Antonio, Jerome and Hahna came back to the city they cherish to get married, celebrating their big day where they fell in love. “Cincinnati is home for us,” Hahna says. “It’s where we met, so we love it.”

Click through our gallery more to see more images from Hahna and Jerome’s wedding: 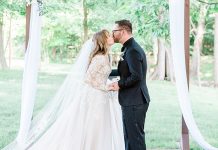