Another ghost kitchen is coming out of the shadows. Jean-François Flechet, of Taste of Belgium fame, is bringing FUEL, his pandemic-era ghost kitchen concept, to life as a brick-and-mortar restaurant in Over-the-Rhine next month.

This eatery bites a little differently from the calorie-stacked waffles he’s known for. It grew out of Flechet’s hobby of running marathons. His coach described food as fuel for the body, and that idea took root in his imagination. FUEL aims to provide nutritious options without carb-heavy fillers—like rice or tortillas—for a healthy diet. It will be a lifestyle restaurant for urbanites who want better fuel from their meals.

“The reason we did it in OTR is because it’s more of an urban neighborhood,” Flechet says. “We see people wanting that type of food.”

Every bite is full of goodies like essential vitamins and minerals along with lean protein and fiber, so there’s something good for everyone, regardless of whether they run two or three marathons a year like Flechet. Despite the emphasis on healthy food, dining at FUEL keeps green things interesting with a hands-on approach to meal planning.

Flechet says it’s a “pick your own adventure” dining experience. The menu offers ingredients, not pre-designed meals, and what goes into each bowl is up to the customer. Even picky eaters may enjoy this approach to healthy food.

Sauces and dressings range from Asian BBQ and coconut curry to tzatziki and an apple and pear vinaigrette. With three different grain bases (quinoa, lentils, and farro), three salad bases (baby spinach, baby kale, and arugula), three protein options (chicken, salmon, and marinated tofu), along with a bevy of veggies, it’s possible to have a different meal from the same restaurant every day of the week. The most frequent flyers in Flechet’s bowl are the roasted cauliflower and broccoli. 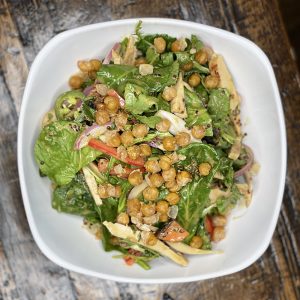 What began as an experiment in unused prep-kitchen space in the back of one of Flechet’s other restaurants became an opportunity for something more. Flechet started asking questions, like, “Is it something we can start growing out? Does it require some tweaking?”

When space became available on Vine Street, the experiment entered its next phase, but it’s keeping what works. The new restaurant will take inspiration from its ghost kitchen roots to streamline prep and service by embracing concepts like digital ordering.

The pandemic has extended the road to opening, however, and the team has faced some unique challenges along the way.

“Everything comes with a delay because of supply chain disturbances at the moment,” Flechet explains. “The oven we wanted was on a 26-week delay. We had to do some wonky things we would never have gone about pre-COVID.”

It’s ironic that a restaurant inspired by running marathons has had such a long road to its brick-and-mortar opening. FUEL’s target opening date is Feb. 2, but it will continue to evolve after opening. The plan is to add a variety of organic drinks, including wine, beer, and kombucha down the line, for which the restaurant is already pursuing a liquor license. While there are no pre-designed bowl options yet, they may join the menu to ease the burden of the indecisive. In the meantime, it’s no bad thing to be spoiled for healthy choices.