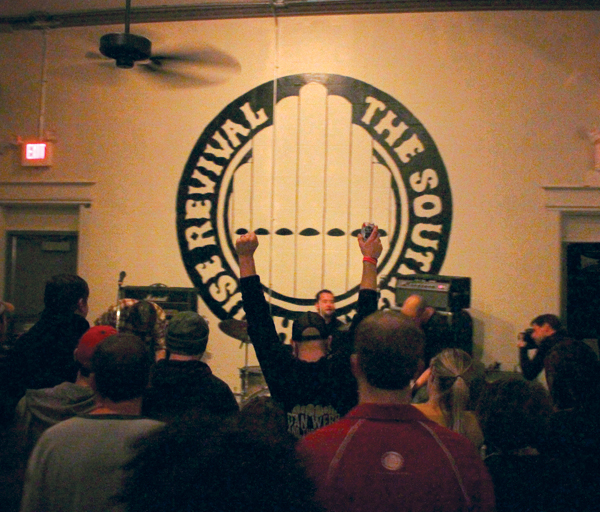 “Damn, it’s good to be home,” yelled Ringo Jones, frontman of Cincinnati band Mad Anthony to a crowd of more than 400 people during Cincy Punk Fest, the first show at the Southgate House Revival. The original Southgate House—the red brick building across Third Street from Newport on the Levee—served as a gathering point for fans and performers for 30 years. Ross Raleigh began hosting bluegrass and country shows there in 1976, but it wasn’t until the mid-1990s, with a surge of Americana shows, that the Southgate House (or SGH) became one of the city’s most storied venues.

“The past five years we really hit our stride,” says Morrella Raleigh, daughter of Ross and manager of the new Southgate House Revival. “There were shows happening six to seven nights a week, and they were everything from country to punk.”

The three rooms—the parlor, lounge, and ballroom—allowed for the eclectic booking that built SGH’s reputation. The 600-person capacity ballroom played host to the Black Keys, White Stripes, and Arcade Fire on their paths to fame while the smaller lounge and parlor rooms hosted local bands and allowed for multi-stage events, like Cincy Punk Fest.

But in January of 2010, a dispute between Ross and his sister, Amina Lee, over ownership of the property resulted in the closing of Southgate House on December 31, 2011. (The venue reopened in June as the Thompson House, still owned by Lee.)

“There were definitely discussions about how it would be easier not to re-open somewhere else, but after doing something for that long, it becomes part of you,” Morrella Raleigh says. In January, they toured the former Grace Methodist Episcopal Church on Sixth Street in Newport’s East Row. “I don’t want to say it was like an epiphany,” she says, “but the minute we saw the church, we knew we were going to reopen there.” Stages would need to be built and sound equipment installed, but the former church offered the possibility of three performance spaces, just like the original SGH, and a unique atmosphere—the main stage, in the former sanctuary, boasts 11 large stained glass windows.

Over the past 10 months, contractors have installed new HVAC, rewired the electrical, and fixed up the plumbing. By October, Raleigh felt ready to open the Southgate House Revival. Though the name remains mostly the same, the management is changing. Ross still has a hand in all the decisions, but the day-to-day operations have fallen to Morrella, who will serve as the chief booker (a marked change from the original SGH, which relied on multiple booking agents to bring in a diverse lineup of shows).

Fans have been itching to see the venue reopen—regardless of who was booking the bands. “It left a hole in the music scene,” says Chris Schadler, who booked the majority of shows at the house from the mid-1990s until 2008. “It was a mid-size venue that we don’t have anywhere else. We’ve lost a lot of national touring bands due to that.” The SGH Revival has the same feel as the original in its early days, when the venue that would be- come iconic lacked even a sound system. It may be unfinished, but the energy in the crowd as Mad Anthony kicked off the Cincy Punk Fest was undeniable. “Things are still unpolished. But we’ll get back to wherewewere,” Raleigh says. “And I don’t think it will take 30 years this time.”