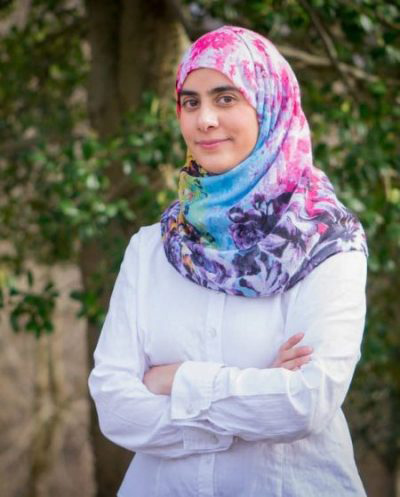 “Writing mighty girls and diverse worlds.” That’s how local author Intisar Khanani explains herself and her work, and it’s the spirit that runs through her latest book, Thorn (HarperCollins). Thorn is also Khanani’s oldest book: It’s the first one she ever attempted, and that was 18 years (and many drafts) ago. Khanani self-published the book back in 2012, and HarperCollins re-published and will release it March 24. The fantasy novel, aimed at a young adult audience, is loosely based on the Grimm’s Brothers tale Goose Girl, a story about stolen identity, adversity, and inheritance. “One of the things I love about speculative fiction is that you’re creating a framework outside of this world,” Khanani says. “You can question authority and power dynamics very deeply. And people will come along for the ride.”

We spoke with Khanani about “windows and mirrors,” the importance of revision, and seeing yourself in your own work

What inspired you to write a novel while you were still in college?

I had written a lot of short stories. I was doing my bachelor’s degree in business, and I always loved writing. I said, You know what, if I want to be a writer, then I should write. I need to just write a novel! What am I waiting for?! I don’t know what I was thinking.

How did you get that first draft to what it is now?

So I set the goal of writing a chapter a week, and I did. And I wrote this book and sat down to read it and nearly fell asleep. It was the most boring book I’d ever read in my life. I was like, Oh my god, this is awful. But I’m glad I had that perspective to see that it wasn’t what I actually wanted to be writing. I also had the determination to make it better.

How is Thorn a different book now?

I think it’s deeper. It’s a lot deeper. And now she lives in a world that has some diversity to it.

Why is diversity important in literature?

And mirrors allow you to see yourself doing these things. I grew up reading books where the only time I saw myself were in these, you know, contemporary novels about “the poor Muslim girl who was oppressed by her parents and her culture and eventually she broke free and liberated herself!” and I would read this and be like, What is this? Who? Where? I didn’t understand. And so I left those books completely. They weren’t written by my people or for my people; they had no bearing on any reality that I knew of.

So I had no mirrors. When I started writing—and I’ve been writing since I was a kid—but when I started actually writing finished stories, I wrote white kids. I had no idea what a fictional world would look like that had me in it. And I didn’t consciously understand that I didn’t think I had a place in those worlds because I had never seen myself in them.

Do you think that’s one reason why reading is important?

If we look at the books that have made it big, a lot of times they’re dystopian stories questioning government, questioning oppression, fighting against oppression, taking vigilante approaches. All these different things that we might find questionable if we were faced with them in our daily lives. But they allow you to ask the question of, “How much do you allow your government? At what point do you stand up and fight? And what would that look like?”

Reading is vital. It builds compassion. So, “You’ve got to walk a mile in someone else’s shoes,” but how do you actually do that? You can do it through books.