When Hunter Greene made his big league debut last week, it would have been natural for him to be nervous. After all, Cincinnati’s top prospect was only 22 years old as he walked to the mound at Atlanta’s Truist Park and prepared to face the defending World Series champion Braves. Almost every pitcher who ever lived would be anxious in that moment.

As Reds fans are starting to understand, Greene is not like most pitchers. “A lot of people were like, Don’t look up,” he said after the game. “But I looked up right when I got out there. I wanted to take it all in and enjoy it. I felt really comfortable out there.”

Greene’s poise was evident from the start. His first MLB pitch was a 98.3 mph fastball for a called strike to Braves rightfielder Eddie Rosario. Pitch number two (a ball) clocked in at 99.6 mph. Then, after a changeup for a called strike, Greene dialed it up to 100.3 as he induced Rosario to ground out to second base.

Atlanta first baseman Matt Olson was next. He torched the Reds to the tune of a .571 batting average in the season-opening series, but he was also the victim of Greene’s first-ever strikeout, a swing-and-miss on a 100.3 mph fastball. Third baseman Austin Riley followed with a strikeout of his own, whiffing on a gorgeous slider.

Greene struck out six Braves through his first three innings, and it was clear that the kid was as good as advertised. By the time the dust settled, he’d picked up the win, giving up three runs on four hits in five innings, thanks largely to a couple of late home runs. His fastball averaged 99.7 mph, and he reached triple digits 20 times. Despite the longballs, the day was an unqualified success: The Reds won to split the series, and Greene was the talk of the baseball world.

The encore was even better in many ways. Pitching at Dodger Stadium in front of friends and family—Greene grew up in nearby Sherman Oaks, where he attended Notre Dame High School—he held the Dodgers scoreless through the first five innings, often making L.A. hitters look helpless. He gave up a couple of runs in the sixth before departing, but he set some new records for the pitch-tracking era in the process.

Greene hurled 39 pitches of 100 mph or more, the highest total for any pitcher since MLB began officially tracking velocity in 2008. Those 39 pitches obliterated the previous record of 33, set by Jacob deGrom last year. Cincinnati’s phenom also broke the record for most 101 mph pitches in a single game (13). And this was just his second major league start!

How can we contextualize his performance thus far? Try this: Greene has thrown 59 pitches of 100-plus mph in the first 10.1 innings of his career. That seems like a lot, right? Well, there are four MLB teams (Brewers, Diamondbacks, Twins, Orioles) who haven’t thrown that many 100-plus mph pitches as a team since Statcast started tracking this data. Greene is an anomaly. He’s special.

By the time he left the mound, to applause from the Dodger faithful, Greene had impressed everyone in the stadium. That includes former MVP Freddie Freeman, who tipped his cap to the young hurler.

The fastball was certainly magnificent, but Greene’s slider was effective as well. To me, however, nothing was more impressive than the composure he demonstrated on the mound. Though his first two starts came against the last two World Series champions, both on the road, there was never a time when he didn’t appear to be in total control. The moment was not too big for him. 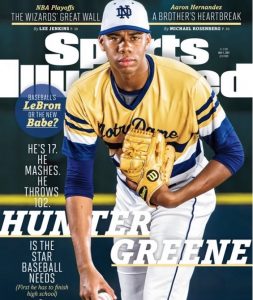 Perhaps that shouldn’t be surprising. After all, this is a young man who was on the cover of Sports Illustrated while still in high school. He’s been in the spotlight for a long time. Cameras and bright lights have been following him around for years.

Let’s not forget, though, that Greene is still a work in progress. There were flaws evident in his first two starts, specifically the home runs surrendered. His changeup still needs work, and he’ll have to make adjustments as big league hitters begin to figure him out. Even the very best pitchers often struggle early in their career; as I like to point out, Hall of Famer Greg Maddux had an ERA above 5.50 over his first two seasons in the majors.

With Greene, in particular, fans should be patient. There are likely to be ups and downs (“peaks and valleys,” in the parlance of Cincinnati’s always eloquent General Manager Nick Krall) in the coming months. Remember, because of Tommy John surgery, Greene hadn’t pitched in an actual game for nearly two years before joining Chattanooga last spring. He’s still developing as a pitcher. Give him time.

Unfortunately, the Reds will need him to be very good very soon. The team is floundering, having lost every game since Greene’s opening series victory. They’re currently mired in last place in the National League Central with the worst record in baseball. Compounding problems even further, Reds COO Phil Castellini spent Cincinnati’s home opener threatening fans, causing a nationwide firestorm in the sports world. #SellTheTeamBob, right?

That 2017 cover of Sports Illustrated featuring the dynamic young hurler included these words: “Hunter Greene is the star baseball needs.” He is certainly the star the Reds need right now, both for his on-field performance and to serve as a distraction from the ongoing public relations disaster caused by Reds ownership and management. Enjoy him while you can.