With the change of seasons, the filling taste of hearty winter beers gives way to lighter, fruit-based beers. Be on the lookout for these five brews as our local breweries spring forward.

Astronaut Food
Urban Artifact recently released its new Astronaut Food. Inspired by the methods of food consumption for astronauts developed during the space race of the 1960s, the beer is a blend of freeze-dried raspberries and blackberries (600 and 400 pounds, respectively, per 1,000-gallon batch, to be exact). With a 15 percent (!!!) ABV, Astronaut Food is $29.99 for a four-pack of eight-ounce cans. 1660 Blue Rock St., Northside, (513) 542-4222 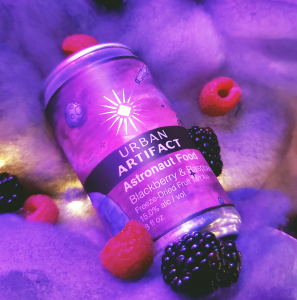 Love Bug
You’ll fall in love with Fifty West Brewing Company’s Love Bug. This sour ale, which was released shortly before Valentine’s Day, is filled with strawberries, tart raspberries, vanilla, and more than 100 pounds of heart-shaped candies. Grab a four-pack of 16-ounce cans for $14.99 (ABV is 6.0 percent). 7668 Wooster Pike, Mariemont, (513) 834 -8789

Rubus Cacao
In MadTree Brewing’s seasonal stout Rubus Cacao, the rubus idaeus (otherwise known as the red raspberry) offers up a tart, sweet flavor as a chaser to the chocolatey goodness of the cacao. This beer has a 7.0 percent ABV and is sold as a six-pack of 12-ounce cans for $11.99. 3301 Madison Rd., Oakley, (513) 836-8733

Zango
Zango is what happens when you combine mango and tangerine fermented with apple juice—a crisp brew with hints of tropical fruit and citrus. The latest seasonal addition to Rhinegeist Brewery’s fruit ale family, this zesty beer has a 5.0 percent ABV and is sold as a six-pack of 12-ounce cans for $10. Zango is also available as a draft. 1910 Elm St., Over-the-Rhine, (513) 381-1367

Spyglass
We spy with our little eyes Urban Artifact’s Spyglass, which is a refreshing, sweet and tart mix of lemon and lime. This sour-fruited ale is brewed with 250 pounds of lemon peels and 200 pounds of lime peels per batch. The beer has a 4.7 percent ABV and is sold as a six-pack of 12-ounce cans for $11.99. It’s available for purchase on Urban Artifact’s website, and you can have it shipped to you. 1660 Blue Rock St., Northside, (513) 542-4222