Independent grocer Megan Bell and her husband, Branden, founded The Next Door Market Mobile Grocery Store out of necessity. When many Louisville businesses shuttered during the pandemic, the Bells seized an opportunity to bring organic and healthy food options to underserved communities by taking a 16-foot truck on the road and connecting with customers at neighborhood festivals and pop-up events. Not only did the couple deliver groceries throughout Louisville, but they also headed to nearby cities like Frankfort and Lexington. This November, The Next Door Market anticipates its grand opening as a brick-and-mortar grocery store on Mall Road in Florence.

Bell’s desire to build a grocery store offering natural foods stems from growing up in one of Louisville’s most food insecure communities.

“My family didn’t always have the best eating habits,” she recalls.  “I didn’t start eating healthy until I was pregnant with my first child, when I realized all the scares that come with pregnancy. Also, growing up in a low-income neighborhood, our community didn’t always have the best options. We only had one Kroger, a gas station, a dollar store, and liquor stores. We didn’t have the option to have [stores such as] Whole Foods and Trader Joes. [Our family] had to move into high-end neighborhoods to receive those options.”

These personal experiences led to Bell researching food deserts in and outside of Kentucky, which also raised questions for her as to why there were so few Black-owned grocery stores throughout the U.S. She discovered that the common denominator was that these communities lacked resources. 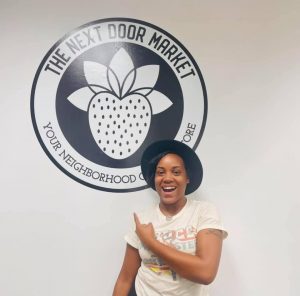 “Luckily, I had mentors who had resources when it came to learning how to launch a business,” she says. “Finding capital, having advisors to help you run a successful business—those types of resources aren’t within our communities.”

While studying business to become an entrepreneur, Bell learned about grocery store operations through executives at Valu Market and Rainbow Blossom Natural Foods. Some of the sponsors who invested in the mobile market include Kentucky State University, University of Kentucky, and the Louisville Small Business Association.

Bell says that she and her husband ran their mobile grocery store for almost two years before deciding to open a physical location. The Next Door Market currently operates online, and customers can have groceries delivered or shipped.

“We also partner with nonprofits and charitable organizations to bring fresher foods to [underserved] communities who don’t have those options granted to them,” she adds.

Bell says she was interested in the Florence location because of the city’s economic growth, and she was surprised that there weren’t any organic and natural foods grocery stores like Whole Foods in the area. “We will be filling that void,” she says.

To keep abreast of details about Next Door Market’s grand opening, visit the store’s Facebook and Instagram accounts.