The life of a city can be appreciated in similar ways to our own lives. As we get older and consider the twists and turns of past relationships, jobs, and milestones, it’s tempting in retrospect to see the journey as an orderly series of events and decisions leading directly from one phase to the next. It can be comforting to think that life turned out the way it was always supposed to—and maybe it has for you. But in the here and now, wow, there’s a lot of chaos, randomness, and uncertainty. Not that there’s anything wrong with that. Life is a constant struggle between trying to tame and control the chaos, randomness, and uncertainty and trying to enjoy it, if not use it to your advantage. It’s what we do every day. It’s also how a city operates.

Looking back at how fledgling Losantiville became modern Cincinnati, it’s easy to draw straight lines and connections from the first riverfront settlers to the metropolis we love today. The river and hillsides were obstacles at first, then became opportunities. Immigrants created jobs and industries, which attracted more people, who spread out to new neighborhoods that took on their own identities and forged their own destinies.

This month, we examine Cincinnati’s current look and feel through 20 buildings that define the architectural spirit of their times. These aren’t necessarily our most important or most beautiful buildings—though several are indeed icons, such as Music Hall, Carew Tower, and the Taft Museum of Art—but they represent unique dashes of design that still matter today. Styles often were a reaction to popular tastes from previous generations; ornate Victorian homes gave way to simple bungalows, and Art Deco details jazzed up what was viewed as a drab, boxy business district. Some styles quickly fell out of fashion, only to be reappraised and reclaimed years later.

There have been “planned communities” here, including Greenhills and Mariemont, but Cincinnati isn’t one of them. Our built environment is the product of 200 years of twists and turns that, in retrospect, ended up fitting together as they were meant to. Just like life. 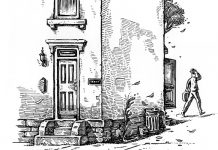