In 2011, Eric Nally, lead singer of the Cincinnati band Foxy Shazam, made a rock and roll pilgrimage from his home in Milford to Lowestoft, England. There, at the private residence of Justin Hawkins of The Darkness, Foxy recorded its new album, The Church of Rock and Roll. The record is scheduled for release this month. “All of our albums really embody where we recorded them,” explains Nally, 26. “We did our first record in Cincinnati. It’s kind of nerdy and goofy and all over the place. This newest one is just really raw rock and roll.” The album is the first release on the relaunched record label I.R.S., which achieved success with The Police and R.E.M. before folding in 1996. Foxy Shazam comes to I.R.S. after an unfulfilling experience at Warner Bros., where the band released one record in 2010. Despite—or because of—leaving Warner, Nally maintains high hopes for the band, whose achievements include appearances with Hole and Panic! at the Disco and the airing of the song “Unstoppable” during a Super Bowl broadcast. “With I.R.S. we have complete control of what happens, when it happens, and how it happens, and we have the backing of Capitol Records,” Nally says. “It’s basically a major label, but it’s more of our thing. We still want to be the biggest band in the world, and we will be. But if it doesn’t happen, it’s going to be because of us, not anybody else.” 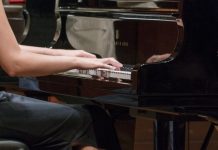