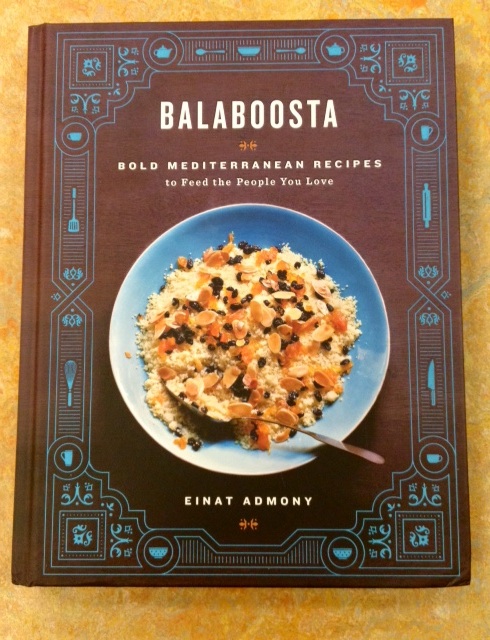 While I do enjoy the frequent and often fascinating restaurant outings and excursions that come with this job, I still whip up something special on the weekends, usually for Sunday dinner. Food at our house is almost always a Mediterranean and Middle Eastern combination. Over the years, I’ve amassed a pretty substantial library of books on the subject, and my most recent addition is Balaboosta: Bold Mediterranean Food to Feed the People You Love, by Israeli-born Einat Admony. Admony is the chef-owner of Balaboosta, Taim, and Bar Bolonat in New York City. The Yiddish word balaboosta refers to the ideal housewife, and the relationships Admony has with her Persian mother, as well as her own role as a working mother in America, are a recurring theme. The book also contains a section devoted to the dishes she prepares specifically for her children.

The recipes don’t disappoint: her signature falafel (Taim is a falafel house) is a significant departure from more traditional recipes. It substitutes minced kalamata olives for the parsley and cilantro often used. I was intrigued and eager to try it. It was tasty, and I’d definitely make it again, although I might add just a little cilantro too. I also followed her recipes for labne and hummus and found both more than adequate. I especially liked the idea of using some of the chickpea cooking water in the hummus to cut back on the amount of olive oil needed, making the hummus taste more like the actual legume.

The “You’ve Been Chopped” salad was a vibrant and healthy dish that was a welcome alternative to the traditional Fattoush version that I usually prepare with falafel. While the ingredients were by no means seasonal, the peppers, corn, black beans, basil, and avocadoes were a ray of sunshine on a cold winter afternoon. I look forward to trying her butternut squash soup with saffron soon, and the coconut milk French toast is on the agenda for next weekend’s breakfast. Lovers of bold and bright Mediterranean flavors and basic techniques will enjoy this collection of recipes, balaboosta or not.