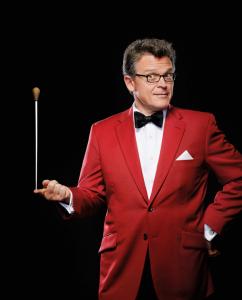 This month marks a homecoming of sorts for John Morris Russell. Though he grew up in suburban Cleveland, Russell spent 11 years in Cincinnati as associate conductor for the Cincinnati Symphony Orchestra, leaving in 2006 for Windsor, Ontario, where he took the podium of the Windsor Symphony Orchestra full-time (he’d been Windsor’s music director since 2001). “This really was our home,” he says of his previous stint here, “but I knew you can’t be an associate conductor all your life. It was time for me to spread my wings.” Now he finds himself filling Erich Kunzel’s shoes, a task he’s more than up to. “We’ve embraced our return with such joy,” he says. “It is literally a new beginning, yet we know intimately where we are.” An avid trumpeter throughout his elementary and high school years, Russell’s first love was jazz; by the time he got to Williams College, the future maestro had developed an equally deep appreciation for classical music too. It wasn’t until his junior year, though, that the thought of conducting entered his mind; while studying abroad, Russell was chosen to conduct a performance of The Pirates of Penzance for the Gilbert & Sullivan Society. With that, he was “hooked.”

Now Russell is primed and ready to take on one of the nation’s most acclaimed Pops orchestras. We caught up with him one sunny summer day to discuss the state of the Pops, how his time in Canada changed him, and what he has in store for the Queen City.

Former colleague Gregg Gustafson, now CEO of the Mobile Symphony, once affectionately described you as “a wind-up toy whose battery never goes dead.” It’s been more than a decade since then. How’s that battery doing? There are lots of people who talk about the energy level—I remember once when I was guest conducting the Toronto Symphony and one of the players came up and said: “Great show, John. Always so much fun to have you. What do you do to recharge your batteries?” And I said: “What I’m doing right now.” It’s not so much what is coming directly from me, but I get this great energy from the orchestra, from our city, and I just give it right back.

Well, you do project a lot of presence up on the stage. I mean, you really make it fun when you’re at a concert. It is fun! Think of all the effort and work that goes into producing these concerts. I mean, it’s immense, a huge team effort that goes into creating those things. And if you’re not up there enjoying every bit of it, you should be doing something else.

You’ve led some of the biggest orchestras in the nation—the New Jersey Symphony, New York Pops, New York City Ballet, New York Philharmonic, and the Los Angeles Philharmonic. How does Cincinnati’s orchestral program stack up? When I came back to [conduct] Idina [Menzel], when we opened last year’s Pops Concerts, it had been five years since I’d been away. [But] it sounded even better than when I was here last. It’s just an exceptional ensemble—exceptional virtuosity from all the players—and [there is] this great joy in performing that’s absolutely second to none.

I went to that concert. It was packed—shrieking teens, cheering—not at all like any Pops concert I’ve been to in recent years. We know that Menzel’s role in Glee was obviously a huge draw, but is this the future of Pops? Let’s get back down to the etymology of the word Pops. It’s from the word popular. Sure, there’s a lot of classic pops—you know, Gershwin, the classics of Broadway. But the cool thing about Pops is that we’re exploring the “Now.” That means you’re always going to take chances. We’re going to get new and different artists, and they’re going to bring new and different things to the stage—stuff that we’ve never heard before.

One of your most successful projects in your previous life here was the eclectic, multicultural December celebration “Home for the Holidays.” Is that kind of a hint of what’s to come? Absolutely. When you think about the quintessential American experience, it’s this mosaic. I learned this in Canada. They are so proud of the cultural mosaic. We have music that comes from the roots of Europe, and Africa, Latin America, Asia, and yet all of those things come together and fuse in different ways to create all of these different types of musical styles that we have. When you think about the panoply of the American musical experience, what are we most proud of as our great contribution to world culture? It’s our music. It’s jazz, it’s rock and roll, it’s Broadway, it’s our great symphonic traditions.

Education has always been a very big part of what you do. Will it continue to be? I’m still going to be conducting the family concerts. What’s really exciting is I get to work with our next generation of conductors and share my own experience and passion for education so that they in turn can share [that] with the rest of the community.

There’s a quote I just saw today—Benjamin Franklin: “Tell me and I forget. Teach me and I remember. Involve me and I learn.” It’s on my Facebook page.

How do you think a decade in Canada changed you as a conductor? How did you grow? What you want music and your orchestra to represent to the community has got to be woven in to every single thing that you do. One of our great challenges in Windsor was connecting with the community. Windsor is a working-class town [with] immigrants from all over the world. I think it is the most diverse city per capita in Canada. One of the things that we all decided from the get-go was that we needed to be more relevant to the people of Windsor. So we built it in to everything we did—everything from creating arrangements for La Chorale du Tricentenaire, which is a group of people who get together once a week to sing the old French songs of the settlers who lived there 300 years ago, to creating an Arrangement for Doumbek and Orchestra. [A doumbek is] a Middle Eastern drum, part of the Arab musical traditions. We found a really great doumbek player and created this Arrangement for Doumbek and Orchestra. People went crazy—they never heard anything like it before.

Windsor is not a really wealthy community. But what was heartening [was that] when the economy hit the wall the halls remained full because people felt this connection, that this was really important. If what is on the stage is of the people, [if] it means something to everyone, then more people are going to come.

What does it feel like to be replacing an icon like Kunzel? It’s so funny because the last time I came to Cincinnati, everyone said: “So John, what does it feel like to fill Keith Lockhart’s shoes?” It was all about this guy who was replacing Lockhart. I didn’t try to be the next Keith. I was me and jumped into the things I felt really passionate about, like education and outreach. Certainly, those aren’t the most sexy things you think about, but it was stuff that I really believed in. I worked for 10 years, planted a whole lot of seeds and did things that weren’t on the radar.

To come back 15 years later, how many people come up to me and say: “Oh! I remember your family concert. My kids loved that! We still talk about Mozart pizza and my kids are in college.” In the big picture, that’s the most important thing: touching people’s lives.

How does it feel to wear the red jacket? I remember Doc Severinsen, maybe it was his 70th birthday, and the guys in the trumpet section gave a presentation at intermission where they gave Doc a red blazer and bestowed upon him the honor of being a lifetime honorary member of the Cincinnati Pops trumpet section. And I always thought: “Dang! That is so cool. Someday I want to get one of those red jackets!”