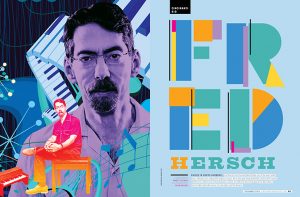 Though he left Cincinnati for the East Coast in 1975, Fred Hersch’s local roots run deep. The North Avondale native was a child prodigy at the piano who proceeded to cut his teeth on the close-knit Queen City jazz scene in his late teens. Over the ensuing decades, Hersch has quietly established himself as a restless and consistent creative force: player, bandleader, composer, and five-time Grammy nominee. He’s recorded dozens of albums, performed in virtually every configuration, from solo to big band, and collaborated on innovative long-form pieces—in particular, a musical setting of Walt Whitman’s Leaves of Grass and his recent “jazz theater” multimedia performance My Coma Dreams. This month he returns for a visit, performing with his trio at The Blue Wisp on December 16 and 17.

Hersch has lived in the same New York City apartment for 34 years. It’s a modest loft space with enough room for his piano and shelves lined with vinyl records, CDs, and music scores. Stacked on the floor are sheets of musical notation paper—all blank. Sipping coffee while we talk, he’s thoughtful and forthcoming, businesslike but not unfriendly. Always a melodic player, his music encompasses reflective beauty and provocative, thorny stretches in equal measure. He doesn’t shy away from difficult subject matter, either; My Coma Dreams, perhaps his most ambitious work, addresses a recent bout of life-threatening illness in an innovative autobiographical format. And as a gay man living with HIV/AIDS for a quarter century, he continues to stare down challenges many of us can’t fathom. In everything he does, Hersch projects a calm, laser-focused sense of purpose that’s downright humbling.

I discovered jazz as a teenager listening to WNOP-AM and Oscar Treadwell’s late night shows on WGUC-FM. Were they on your radar, too? I used to listen to WNOP. My mom always had it on in the car. How could you not like a jazz station that floats on gigantic oil drums in the river? Oscar Treadwell had a library of like 30,000 LPs or some shit, it was ridiculous. He would do a Friday night class at the University of Cincinnati for two hours on a particular artist. Ornette Coleman, Mingus. So I would sit in a classroom and when it was time to listen to something he would turn out the lights. You’d be sitting in a roomful of strangers listening to this stuff. I learned so much from that.

After I graduated from Walnut Hills High School, I went away to Grinnell College in Iowa and that’s when I really started to get the jazz bug. I came back to Cincinnati in the winter of ’73–’74. It was the winter of the so-called energy crisis so Grinnell gave us a longer vacation. I pretty much stumbled into the Family Owl on Calhoun Street and heard [saxophonist] Jimmy McGary, asked to sit in, played a tune, and got my ass kicked.

Still, you wound up staying on and playing jazz in Cincinnati. Did you have a specific mentor here? Jimmy McGary. For me, he was the guy. From [guitarist] Kenny Poole I learned how to play bossa nova. From [guitarist] Cal Collins I learned how to accompany a singer. But Jimmy really was the one for me. I mean, I learned from all of them. They were all so nice to me. I was probably obnoxious and pushy. They gave me some tough love but they also in some way got a kick out of me. Because then, young jazz players weren’t crawling out of conservatories the way they are now.

The drummer Dee Felice is another name I remember hearing. Yeah, Dee was great. Dee was sort of camped out at this place called the Buccaneer Lounge out on Reading Road. I used to play with him; we’d play for the headliners that came through. I’d be in the backing band.

What was it like to grow up gay, and come out, in Cincinnati? I didn’t really come out in Cincinnati. I knew I was gay from the age of 13, but back then gay people were, in my mind, people who hung around in parks or in bus stations or, you know, diddled around with kids. There were no healthy role models at all. A well-adjusted gay person didn’t exist. I knew I was attracted to men—that was definitely the case. But it wasn’t until I moved to Boston to go to NEC [New England Conservatory of Music] during the summer of 1975 that I first went out to a gay bar and began to have some gay friends. I probably told people that I was bisexual or something, cause that’s what everybody did in those days. It didn’t sound quite as heinous. Although I did tell my parents when I was very young. I even told my grandmothers.

After Boston you moved to New York City and apprenticed with a staggering array of jazz veterans—legends, really. Were there times you wondered, What am I doing here? The first time I got on the bandstand at the Village Vanguard with Joe Henderson, Ron Carter, and Al Foster, it was like, “Hey, I’m a gay Jewish kid from Cincinnati. How the hell did I get here?” I began to realize that I’m meant to be here and once the music starts I’m one quarter of that quartet. And those guys have more experience than I do but I wouldn’t be there if Joe didn’t want me there. And he kept hiring me. So that was my answer.

How has being openly gay figured in your work? I came out gradually to anybody who knew me in New York. And then there was 1993: the big media coming out about being a gay jazz musician who has HIV/AIDS. I found myself in Newsweek, CNN, gay magazines, Downbeat, The New York Times. And I may have been the first person to do that. Subsequently, I’ve helped other gay jazz musicians who are struggling with HIV or with being gay and I’ve become sort of an accidental activist.

Is it more than you expected, being thrust into the role of a spokesperson? I just did what I thought was right. And then I realized, Hey, I have an opportunity. As a musician, I don’t go up to people and say “Hey, I’m Fred and I’m gay.” I’ve been out so long that it really doesn’t matter. It’s a non-issue. I don’t think you can be the artist that you can be when you compartmentalize your personal life completely.

Your album My Coma Dreams is so ambitious, both artistically and personally. How did it come about? When I came out of my coma and went into rehab, summer of 2008, I couldn’t talk because of a paralyzed right vocal cord. I didn’t drink or eat for nine months. I couldn’t walk. I had absolutely no fine motor coordination. I was helpless, basically. I was hooked up to a stomach tube for food. I was down to 105 pounds. It was a pretty bad scene. I went to in-patient rehab for a month and then came home in early September. And from the time I awoke in the hospital, in what they call a step-down unit, which is where you go after the ICU, I remembered this series of dreams. And I never, ever remember my dreams. But these dreams were so specific, so powerful—smells and textures. So when I came home and could eventually peck them into a computer, I wrote each dream into about a paragraph and gave them titles. And then I just sat on them. Eventually the writer and theatrical director Herschel Garfein came over and read them, we talked for a little while and he said, “Just give me the transcripts, I’m going to take this home and I’ll come back in a week or two.” And he came back in a couple weeks and had devised this rather ambitious scenario.

It’s certainly the most personal thing I’ve ever done. We call it “jazz theater” because we don’t know what else to call it. It’s not a musical, not a play, not a jazz concert. It’s something you’ve got to see and then you’ll go, “Oh, I get it.” We’ve done it at medical conferences, universities, and performing arts series. It’s unfortunately very expensive to do and complicated, you need a live guy doing video and it involves around 16 or 17 people. But I hope now that we have a good film of it we’ll get more performances.

It’s inspiring. Not to be melodramatic, but I can’t imagine facing mortality every day the way you have for over 25 years. Does being a musician help you face the ultimate challenge? The pneumonia [that triggered the coma] was not connected to HIV. It was bad pneumonia. I was diagnosed [with HIV] around the time I turned 30. It was before I made my first album as a leader. So for many years, certainly until I was 40, on a given project I’d think: This is the last record I’m going to make. I just wanted to make albums to leave a trace of me behind in the world because I knew I was going to die. All my friends were dying.

[Now] I take about 30 pills a day. Fortunately my health is actually quite good. The meds have side effects so I have to take pills for the side effects. But I have a very good doctor, so I just take my pills and usually I feel fine and energetic. At this point in my life, at age 58, it’s just as likely that I’ll die of whatever other people my age die of.

When I was 50 I did a concert at Carnegie Hall, my big 50th birthday present. I’m already thinking I’m going to do some sort of extravaganza for my 60th. It’s like: I’m here and I’m doing pretty well and I may be an example of somebody who keeps doing what their instinct tells them to do. I’m not the fastest or loudest piano player on the planet, I just do what I’ve always done and try to get better at it. For whatever it’s worth, I sound like me. And a lot of people can’t say that.