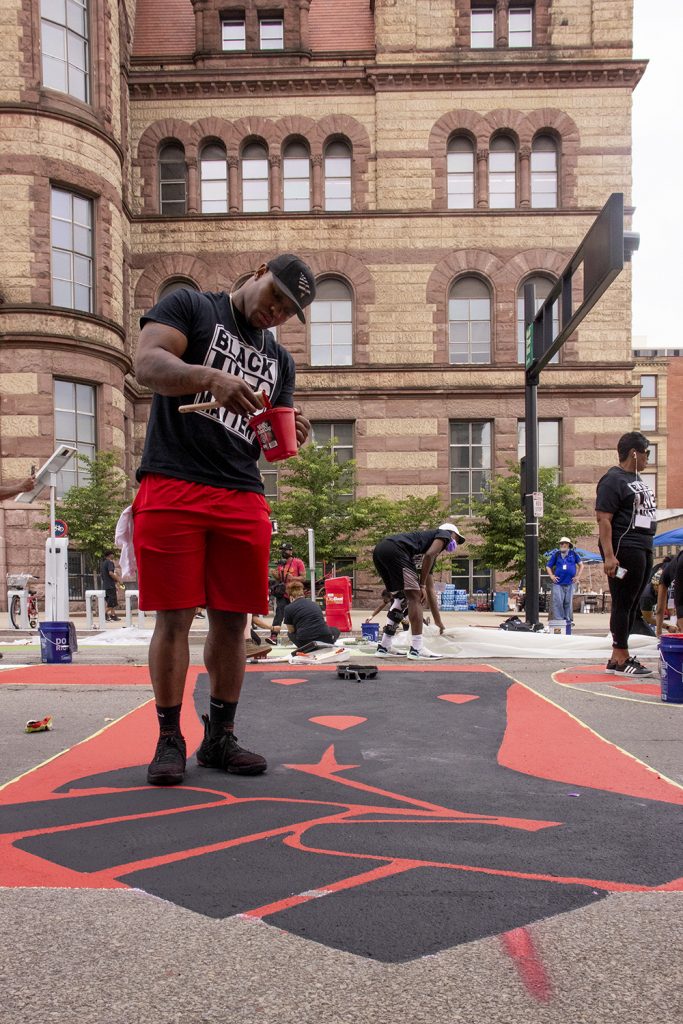 Michael Coppage got the “L” in “BLACK.” And when the Cincinnati artist looked at the letter, he envisioned the thrust of a fist, the sign of black power. “The fist means resistance and resilience,” says Coppage, taking a break from the sun on the steps to Cincinnati City Hall on June 18. “Resistance to accepting what’s been given, but the resilience to still be successful within the framework of that.”

Coppage is black. Each of the 17 leading artists commissioned to design and paint a letter or punctuation mark in Cincinnati’s “BLACK LIVES MATTER!” mural is black. They had to be, says Alandes Powell, who initiated the idea. “I wanted art designed from their own cultural experiences,” she says. “Is it uncomfortable that it must be black artists? All I knew is I needed them to design from their heart.”

Voices like Coppage’s need to be heard. With bachelor’s and master’s degrees in fine art, he’s shown art around the world, from Singapore and Malaysia to Cincinnati’s own 21c Museum Hotel and the Columbus Museum of Art. Still, he knows a lot of people see his ball cap and gold teeth and envision a criminal.

His work—art and otherwise—is all about resistance and resilience, which is why this mural project is right up his alley. Coppage wears several hats as a professional artist and co-founder of a nonprofit, Pieces, that engages adolescents with behavioral and mental health issues in therapeutic art. He works in hospitals and schools and trains others working with young adults. And he’s a full-time operations supervisor at a 57-bed transitional house for men struggling with homelessness and substance abuse, where he’s worked for 13 years.

“I live it,” Coppage says. “I started my nonprofit to address the very issues I talk about in my paintings. I create the change I want to see in my community.” Next year he will have a solo installation in the Weston Art Gallery at the Aronoff Center commenting on Cincinnati’s food deserts.

So how did this project come about? Well, first, other cities did a BLACK LIVES MATTER street painting, starting with Washington, D.C. Then, less than a week ago, Powell, a Fifth Third Bank vice president in charge of business controls, was on a work conference call when a colleague in Charlotte, N.C., began talking about the BLACK LIVES MATTERS mural in her city. “She was so impressed by what Charlotte had done and said it gave her so much joy, so much hope,” Powell says. “I decided, We deserve that hope.”

Powell called her connections at City Hall, the Urban League of Greater Southwestern Ohio, and ArtsWave. Everyone got on board quickly, including ArtWorks, which leads the region’s public mural efforts. On June 17, Cincinnati City Council unanimously passed an ordinance declaring that Black Lives Matter and authorizing creation of a mural on Plum Street in front of City Hall. The letters’ outlines and base coats of paint hit the asphalt that evening, with the goal of unveiling the mural two days later on Juneteenth, the annual celebration of the end of slavery. Powell has secured at least $2,500 for each group of artists and is trying to raise more funding.

Powell is also a poet and wrote a poem in recent weeks that became the theme for Cincinnati’s mural. Each line of the poem, titled “We want what you want,” is represented by a letter.

Katrice Burno is assisting lead artist Brandon Hawkins on the “B,” which represents the first line of the poem: “We want what you want to raise our kids in peace.”

“It’s time for change,” Burno says. “We all want to thrive.” She plans to bring her children—ages 13, 9, and 1—to the mural unveiling at 2 p.m. today. “To say I had my hands in the painting of this, it’s special. I can’t wait to show them that so many people came together to make this.”

Peter Roman of Wyoming blocked off the morning on June 18 to volunteer. He’s a designer for Procter & Gamble and didn’t know a soul on arrival but is excited to see his boss and a few of his colleagues here. He says the morning has been “meditative.”

“I am a designer, so to be able to come and help in this way for a good cause felt really special to me,” Roman says. He and his wife and kids marched in two local protests and donated money to Black Lives Matters organizations.

Around him, the artists bent on their knees and standing to observe their work are mostly black, but many other shades of brown and white as well. All ages. More than 60 professional artists and assistants welcome volunteers throughout the day to help bring their creative visions to life on the street.

It’s the diversity that makes this protest movement feel different from others, Coppage says. He’s an optimist but also a realist, saying he’ll recognize progress when it looks like better outcomes for black Americans, better outcomes in schools, better financial outcomes—“truly equal opportunities” in areas like housing, environmental justice, and food security.

The group on Plum Street began calling itself Black Art Speaks, Powell says, a few days after they chose their letters. The mural is their bat signal. “This is our way of calling for help,” she says, adding that she and the group aren’t done pressing for change. “You have left us out here. We are the wounded, limping, and barely walking.”