Hyde Park Asian Fusion eatery E+O Kitchen has expanded with a new concept in E+O New Asian, which opened downtown on February 25 at 645 Walnut St. Helmed by Chicago native chef Rodelio Aglibot, nicknamed “The Food Buddha” for his zen-like approach to cooking, the restaurant serves twists on traditional Japanese and Pacific fare, including sushi, seafood, glazed baby back ribs, grilled angus ribeye, and other meat-centric dishes, along with vegetarian options.

The new restaurant separates itself from its sister location in Hyde Park with Pan-Asian flavors from the Philippines, Korea, Vietnam, and more. “It’s focused on Asian food with Japanese influences and a touch of Filipino,” Aglibot says. “It’s going to be a different experience than E+O Kitchen, yet we want it to represent a high level of experience and food that we hope we become known for in Cincinnati.”

Guests can enjoy classic E+O starters like kale and brussels sprout salad or tempura green beans in a tamari soy sauce with a poached egg—or try fun new snacks, like fried chicken skin with a vinegar dip or a baked crab spicy mayo sushi handroll. Among the main courses are a Filipino-inspired rib eye steak in a sesame soy glaze and a panko-crusted salmon topped with wasabi-butter sauce.

The restaurant can host up to 110 guests with comfortable bench seating throughout the restaurant, plus a sushi bar anchored by a splashy mural of an octopus (created by a local artist in Cincinnati). Compared to the original spot, “it’s a little bit more upscale—not bougie, but more upscale and comfortable in a different way,” Aglibot says. “We’ve created a really fun venue that complements the food.”

E+O New Asian accepts reservations and is open Tuesday–Saturday, 3–10 p.m., and the bar is open late. 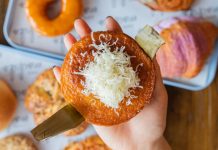 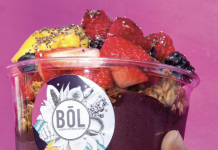 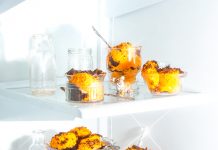