Cincinnati’s last surviving daily newspaper celebrates its 180th birthday on Saturday. Here are a few nuggets of trivia for enquiring minds who might want to know.

The first issue of The Cincinnati Enquirer came off the presses on April 10, 1841. On the very same day in New York City, Horace Greeley published Volume 1, Number 1 of The New York Tribune. Merging in 1924 with The New York Herald, The Herald-Tribune survived until 1967 before shutting down.

With all the debate about voting rights these days, it’s interesting that the lead story in the very first edition of The Enquirer consists of the entire text of a bill under consideration by the Ohio General Assembly “To Preserve the Purity of Elections.”

Publishing on the Sabbath

The first Sunday Enquirer appeared on April 20, 1848, and created a great deal of controversy. Although it should be obvious that a Monday morning edition required a lot more Sunday labor than a Sunday edition, tut-tutting ensued. Only four other U.S. newspapers published Sunday editions in 1848, and all have ceased publication—making The Enquirer the oldest continuous Sunday paper in the country.

Three Groans for the Francophile Rag

When France and Prussia went to war in 1870, Cincinnati’s newspapers, fully aware of the Deutschland sympathies of their readers, quickly announced their support for Prussia. All but one newspaper, that is. The Enquirer proclaimed support for France, right up to Prussia’s crushing victory. A day after France surrendered, Cincinnati’s Germans marched through the streets, stopping at every newspaper office to cheer. All but one. In front of The Enquirer, the crowd gave “three tremendous groans” of disapproval.

No Respect for Artists

Lafcadio Hearn’s grisly reporting on the hideous crime known as the Tanyard Murder in 1874 is well known. It isn’t often remembered that two other major Cincinnati talents were involved in the dissemination of the gruesome details of this foul affair. Artists Frank Duveneck and Henry Farny—both of whom have multiple works on display at the Cincinnati Art Museum—provided the gothic sketches accompanying Hearn’s spine-tingling prose.

During the 1880s and 1890s, the Enquirer sports editor was a former news reporter named Harry Weldon. This was the era before typewriters when journalists turned in their copy on handwritten sheets. Weldon’s penmanship was so atrocious that few typesetters could decipher it. He was nicknamed “The Compositor’s Despair.”

Corrupting the Morals of Cincinnati’s Youth

Cincinnati’s Roman Catholic Archbishop decried The Enquirer’s flagrant immorality in the 1880s, describing it as “a daily newspaper unfit to be read by any human being, much less a Christian.” The offending material? A “personals” column in the classified advertising section, through which young men and women arranged illicit assignations and prostitutes marketed their services.

In 1899, the bonifaces of Cincinnati collaborated on a small book called The Bartender’s Guide, full of recipes for their signature cocktails. Colonel Thomas Cody, star mixologist of Covington’s Latonia Hotel, contributed the Enquirer Cocktail: A glass half-full of fine ice over which is poured a wineglass of imported sherry, a half glass of cream of cocoa, and eight to 10 dashes of orange bitters, served with an orange slice.

Flowers for the Old Lady

The deep ruby-red “Enquirer” carnation has been described as the most perfect cultivar of that species, mostly by the newspaper that sponsored a carnation-growing contest in 1899. Winning the plaudits, and a gold medal, was Richard A. Witterstaetter of Delhi, who bred this outstanding flower and named it after the newspaper that awarded him the gold medal.

Under the iron rule of Marion Devereux, society editor of The Enquirer from 1910 to 1939, no respectable woman in Cincinnati would dare to select a convenient date for a luncheon, charity event, or family wedding on her own. Every society matron in the Queen City religiously conferred with Devereux to be assigned a date consistent with the regal editor’s social calendar.

John Roll McLean was owner of The Enquirer from 1881 until his death in 1916. For a time, he was the unelected boss of Cincinnati, predecessor to George “Boss” Cox. McLean ran for office several times and always lost. He carried around a little notebook containing the names of people he particularly disliked. He called it his “Son-of-a-Bitch Book.”

Perhaps the most famous diamond in the world is the deep blue Hope Diamond now on display at the Smithsonian Institution. Few remember that this luxurious stone has a connection to The Enquirer. One of its owners was Edward Beale McLean, John Roll’s son, who owned The Enquirer (and The Washington Post) from 1916 to 1933. McLean bought the diamond for his wife, Evalyn. The diamond is reputed to be cursed. Maybe so; McLean died in an insane asylum.

The Rites of Spring

In the late 1940s and early 1950s, a young sportswriter named Whitney Tower gained a reputation as something of a character, even among the oddballs in the Enquirer newsroom. He was an excellent writer and turned out travel pieces as well as sports copy, but he really didn’t need the work because he came from wealth on both sides of his family. Every spring, he would enter the newsroom and proclaim a bawdy little ditty that began, “Hooray, Hooray, the first of May! Outdoor [lovemaking] begins today!” Tower went on to cover horse racing for years at Sports Illustrated. 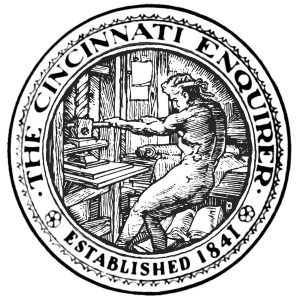 Owned by the Competition

From 1956 to 1971, The Enquirer was owned by the E.W. Scripps Company, publishers of the competing Cincinnati Post. After buying controlling stock in The Enquirer, the Scripps purchased the only other remaining daily in town, The Times-Star, and merged it with The Post, leaving the company in control of every daily newspaper in town. Federal anti-trust regulators filed suit in 1964, and Scripps agreed to sell The Enquirer. Ironically, Scripps limped into a “joint operating agreement” with The Enquirer by the end of the 1970s in a last-ditch effort to save The Post.

Promo for a Face Change

Throughout the summer of 1963, Enquirer readers found daily advertisements proclaiming nothing but “Bodoni Is Coming!” Curious subscribers called to ask whether it was a promotion for a trapeze artist or maybe a lawn fertilizer. On September 30, the secret was out: The Enquirer had ditched its long-suffering headline typeface, Cheltenham, for Bodoni Bold, adopted after much research into the optimum typeface to “give readers headlines they might read more quickly and with clearest possible understanding.”

I’m a Music Critic, Dammit, Not a Journalist!

Longtime Enquirer classical music critic Henry S. Humphreys accompanied the Cincinnati Symphony Orchestra on one of its world tours. One night, he called the city desk to let the editor know he wouldn’t be filing a review of that day’s concert because the pilot got lost and landed the orchestra’s plane in the wrong city. He hung up on an editor dying for details but clueless as to where Humphreys had called from.

The Enquirer could have celebrated a bicentennial in 2018. Today’s daily newspaper traces its origins to a weekly launched on June 23, 1818 and originally named The Inquisitor and Cincinnati Advertiser. Over the next couple of decades, the paper was renamed The Advertiser, The Advertiser and Phoenix, and The Advertiser and Journal. Along the way, it began publishing twice a week and, starting in 1838, daily. On April 1, 1841, owner Moses Dawson sold the whole operation to the Brough brothers of Marietta, Ohio, John and Charles, who bought new type but published from The Advertiser’s offices and presses 10 days later.

The Enquirer celebrated its 150th birthday on April 10, 1991, by publishing the news that the newspaper had won its first Pulitzer Prize ever. The prize was awarded in editorial cartooning for the work of cartoonist Jim Borgman, who had joined The Enquirer staff 15 years previously.