Steve Zugelter has known his way around a video camera for quite some time. His early years were spent filming commercials, and then a twist of fate led him into the magical world of wedding videography—and he never looked back. “The beautiful thing about weddings is that everybody is in a great mood,” he says. “Spirits are high. Energy is through the roof. Just to be part of that is so amazing.”

In 2009 he overhauled his filming style, changed his company name to Studio Z, and evolved into the type of work he’s most known for today: artistic, cinematic films that tell stunning wedding stories. He gave us the scoop on choosing the right videographer and the importance of capturing your wedding day on film.

What is the significance of videography to the wedding as a whole?
“Decades from now, that film becomes a family heirloom. And that’s important to me. I wish my grandparents had had their wedding filmed. To go back and look at Grandma and Grandpa when they were younger and to see how he held her during their first dance or how their voices sounded when they were young—I would give anything. It’s awesome and rewarding to me to offer that to people.”

What questions should couples ask a videographer before they hire one?
“‘Tell me about your approach.’ Ask about any kind of backup gear. Find someone you’re comfortable with. Do you share the same vision?”

Our first step in editing is going through and finding those beautiful sound bites,” says Zugelter. “Those are going to be the bed that creates the wedding film.

How does a couple begin the search for a videographer?
“The beautiful thing about wedding films in Cincinnati is that there’s a lot of great people doing a lot of great work. It’s also so diverse. Couples get to choose which style they identify with most and who they want to spend their wedding day with. At the end of the day, budget is also a concern.”

At what point in the wedding planning process should the couple hire the videographer?
“As soon as possible. Years ago when I started, videography was always thought of as, ‘If there’s money left over, we’ll get a videographer.’ And that’s what I and a lot of other videographers accepted as the norm. Now we’re seeing it where couples are booking the church, then the reception place, and then the videographer. People are choosing their wedding dates based on our availability, and that’s pretty special.”

What would you say to couples who are debating whether to hire a videographer?
“My first question is going to be, ‘Why not?’ Even if it’s not Studio Z taking care of your wedding film, for Pete’s sake, get somebody to film your wedding. It’s important. I think that a lot of the reason for being hesitant is ‘How often am I going to watch it?’ Well, I have a lot of things I own that I don’t use every day or even a lot, but you know what? I’m still so glad that I have them for when I do want to enjoy them.”

What’s next in videography trends?
“There are always trends that are coming and going. ‘Trash the dress’ was huge years ago, and nobody does it anymore. Right now the popular thing is the drones, and everybody is getting aerial footage. The same-day edit, I think that’s always going to be popular because brides get to see their wedding video that night. There was a renaissance several years ago when the style became so much more cinematic, and I think we’re always going to build upon that. I hope things don’t reverse to anime and Cinderella effects.”

Both photography and videography are tasked with the important job of documenting your wedding day, but which plays the bigger role?
“I think photography and videography are equally important. Photography is able to capture those single, split-second frames that you hang on the wall, that you put on your desk. Wedding film does exactly the same thing, except we’re able to incorporate audio. You get dad’s speech, your maid of honor’s speech.” 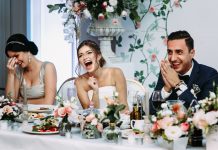 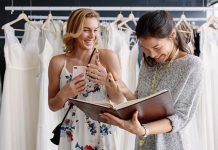 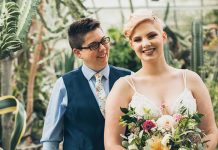