We all want to feel like we’re on top of the world. Rise to the challenge of a fast-flying adrenaline rush or enjoy drinks with a view at these local spots that will be the high point of your summer.

THIS ROLLERCOASTER IS A SCREAM

The view from the very top at Kings Island can seem pretty calm until you crest the first hill of its newest roller-coaster, Orion, and drop 300 feet at a staggering 85-degree angle. The steel giga coaster debuted last summer, when USA Today named it the country’s best new amusement park attraction. Reaching speeds up to 91 mph, the coaster takes riders over and through another seven hills. Check out videos of Orion and other heart-stopping rides on the park’s new TikTok page (@officialkingsisland). 6300 Kings Island Dr., Mason, (513) 754-5700

Peregrine falcons released as part of a project to bring the species back from the brink of extinction started shacking up on downtown’s PNC Tower in 1993. They’ve reared their young on the city’s tall buildings almost every summer since. But learning to fly around high-rises is high risk, and when a young falcon loses its way, local wildlife nonprofit Raptor Inc. comes to the rescue. After birds are nursed back to health at its Union Township mews, volunteer Jeff Hayes smuggles a towel-covered box onto the fire escape at the back of the Mercantile Library’s fiction stacks and lets loose another beautiful bundle of fury high above the city streets. Keep an eye out for them soaring between the skyscrapers.

SIP ATOP A BREWERY

At long, long last, Northern Kentucky has a rooftop destination to call its own. Clocking in at an impressive 5,000 square feet, Braxton Brewing’s West Seventh Street addition, which opened in July 2019, offers a tantalizing peek of the Cincinnati skyline and unparalleled views of Covington that sparkle at sunset. It’s easily one of the most Instagrammable spots in NKY with its extensive lawn space, lounge-worthy seating, and lush living wall. Order a bite from Parlour on Seventh straight from the bar, grab your favorite Braxton brew from one of 20 rooftop taps, and settle in under the string lights for a picture-perfect Kentucky evening. 27 W. Seventh St., Covington, (859) 261-5600

TAKE A LEAP OF FAITH AT CONEY’S HIGH DIVE

As my 10-year-old daughter jumps off the high diving board at Coney Island without hesitation, I catch her flight of joy in a quick snapshot. The nine-foot diving board opened as part of Cannonball Cove at Coney in 2019, after being closed several years ago for water-depth issues. “We wanted to bring back the high diving board for guests who remembered it fondly,” says Marley Wallace, assistant brand manager for Coney Island. High diving boards used to be ubiquitous in public pools, but they’re a rarer sight now in our risk-averse world. My goal is to honor the challenge and swan dive off it at least once before the summer is over. 6201 Kellogg Ave., Anderson Twp., (513) 232-8230

The Pitch is a soccer bar. Sure, you can catch a Reds game on its 30-plus TV screens, but The Beautiful Game is in the DNA of this new hangout directly across the street from TQL Stadium. Artificial turf and stadium-style lighting create the right mood, but the oft-raucous energy shouldn’t chase away thirsty locals in search of a local beer or craft whiskey. Climb up to the orange-and-blue (for FC Cincinnati, naturally) open-air rooftop to take in the stadium’s wild matchday (and sometimes non-match night) fin lighting displays, or stay downstairs for a low-key round of cornhole on the picnic-styled covered patio. Olé! 1430 Central Pkwy., Over-the-Rhine

You know you’ve found the prize-winning baldcypress, Spring Grove Cemetery & Arboretum’s tallest tree, even before you spot the plaque identifying it as an Ohio Champion tree. Spring Grove’s 750 acres are home to 27 champion trees, more than any other institution in the state. “They are basically the oldest ones of their kind, which means they don’t have that much time left,” says Dave Gressley, director of horticulture. You still have time, though. Grab a visitor’s map in the main office and prepare to look skyward. 4521 Spring Grove Ave., Spring Grove Village, (513) 681-7526

THE LITTLE MIAMI FROM ABOVE

Perched on the banks of its namesake waterway, Little Miami Brewing Company is the king of casual brewpubs. The rotating taps boast 16 house brews (a pilsner, a hefeweizen, and a Belgian wit among the staples), while the menu offers brick-oven pizzas, gourmet salads, and a tantalizing tower of shareable nachos. A trip to the upper deck delivers sweeping river scenes, but virtually anywhere on the patio awards a bucolic view. Picnic tables, colorful Adirondack chairs, and fire pits line invite visitors to sit, sip, and stay a while. Bring the kids, bring the dog, bring your mom. The unpretentious vibes are just as worthy as the view. 208 Mill St., Milford, (513) 713-1121

SEE EYE TO EYE WITH A GIRAFFE 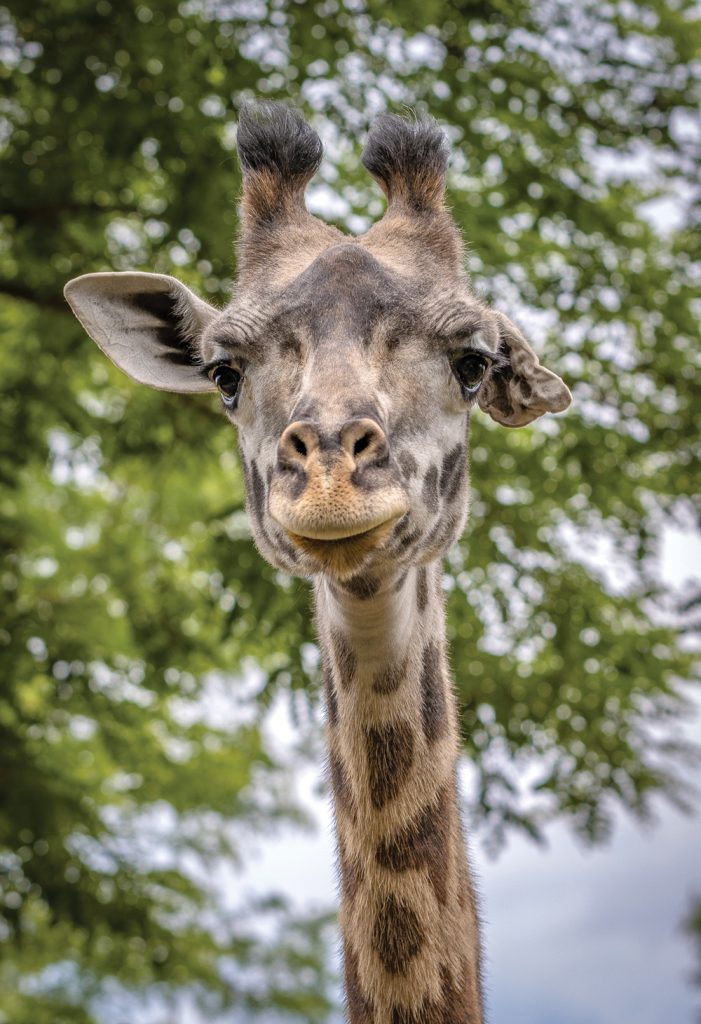 If you’ve ever wanted to have a staring contest with a giraffe, Giraffe Ridge at the Cincinnati Zoo & Botanical Gardens is the place for your tête-à-tête. The 27,000-square-foot exhibit’s elevated platform allows you to feed lettuce to Kimba, Tessa, and CeCe. Although they were born a little over the average height of an adult male human, Theo (the baby giraffe born in November 2019) and his older brother, Fenn, aren’t quite tall enough to participate in the feedings yet, but they’ll be able to get in on the action soon. After all, these are the world’s tallest animals we’re talking about. 3400 Vine St., Avondale, (513) 281-4700

RISE ABOVE IT ALL AT THE BANKS

If you’re a sucker for skylines (and who isn’t?), beeline for AC Upper Deck by way of the AC Hotel Cincinnati at The Banks. Go to the elevator, press Floor 8, and emerge at an insta-gasp panorama of the riverfront, Great American Ball Park, and twinkling skyscrapers. Sultry string lights, vibey tunes, and city breezes make the space ooze with ambiance. Seasonal cocktails dominate the menu, but spiked slushies and savory nibbles (flatbreads, paninis, and a sassy brown-sugar bacon plate) deserve honorable mentions. Or, if you prefer, just feast on the satisfying view. 135 Joe Nuxhall Way, downtown, (513) 744-9900