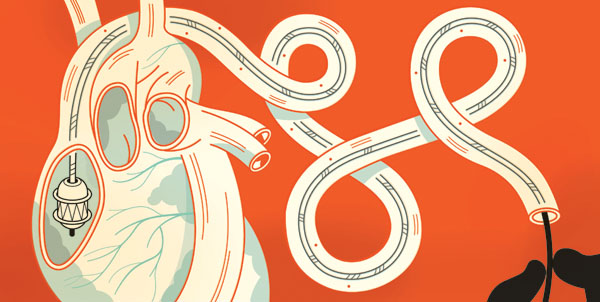 I’ve wanted to be a heart surgeon since I was 11 years old. I really tried to find other things to like, but I couldn’t find anything I liked as much as surgery. I came to Good Samaritan in 1989 to train. Almost 10 years ago we got our first robot and I realized very quickly I’d have to travel to Europe to learn how to use the technology. That was where I first learned about the transcatheter aortic valve replacement (TAVR) procedure, and I went back to Europe to study it further. It got approved in the United States in 2011, and we did our first ones in April 2011 and about 30 since.

It’s best for people at high risk for conventional open-heart surgery. There are a lot of people in their nineties with aortic stenosis. Your heart valves start to calcify as you get older. It’s a very, very common problem. But to put a 92-year-old through open-heart surgery can [require] a year of recovery. It’s like giving you two broken hips: If you’re young and healthy, you’ll get over it. If you’re 92, you may not. The advantage of TAVR has been [that] we don’t do the operation better, but we can do an equivalent operation without putting the patient through so much trauma. The benefits are a faster recovery, especially once you leave the hospital.

Although we do a lot of minimally invasive aortic valve surgery, with the TAVR, it’s an incision in the groin that’s as big as a hernia repair. We go up with a wire and put a balloon inside the valve. On the outside of it is a [replacement] valve that’s been crimped up. We blow up the balloon and it expands the valve. When we deflate the balloon it leaves the [replacement] valve in place.

Some people come looking for this, as you can imagine. A lot of people want to come if they hear there’s an option to have it done through your groin. And they’re too young and they’re too healthy. They won’t qualify. Some of this is still controlled by the insurance companies and Medicare. Medicare has a whole list of guidelines, and if you don’t hit the guidelines, then they won’t pay for it. It’s a good control, because it means the technology won’t get abused.

I’ve had some of my physician friends say, “Man, this is crazy. You’re doing these procedures on 95-year-olds.” The reality is, though, they’ve looked at this financially. If you don’t fix the patients, it’s not cheap for them. They develop congestive failure, they lose their independence, they have to go into nursing homes. In the era we practice in, this is actually proving to be very cost effective. It’s cheaper to fix the patients than to let them go on with a “natural” existence.

The bottom line: It makes me feel great that we can offer something to patients that they wouldn’t get otherwise and make them feel better.