Home Style + Shopping Our Guide to Ceramics in the Queen City

From the legendary Rookwood Pottery factory to Funke Fired Arts and scores of studios and galleries in between, the Queen City not only has a rich ceramics history, but it’s knee-deep in source material too.

Classes
1. Covington Clay, a gallery space and pottery studio in Covington’s artsy redevelopment corridor, offers classes for all skill levels in wheel throwing and handbuilding, with facilities open to registered users at all hours. covingtonclay.com

2. Located in Historic Loveland, Whistle Stop Clay Works is a one-stop facility with group and private classes, studio-rental space, open-studio time, camps and afterschool programs for children—even a monthly cocktail event for the grownups. Motto: “Our studio is your studio.” whistlestopclayworks.com

3. Mudlark Pottery Studio & Fine Art Gallery in Florence sells handmade stoneware and has a schedule of wheel-work and handbuilding clay classes. Threw pots in college but haven’t been near a wheel since? Mudlark has a two-hour, one-time class for you. mudlarkpotterystudio.com

4. In Walnut Hills, Core Clay is one of the biggest facilities in the area for “the clay artist, hobbyist, teacher, student, and anyone clay-curious.”

5. Owned by Sandra Gantzer since 1996, Madison Clayworks in Madisonville offers studio space and classes in wheel-work, as well as a gift shop. Supplies for sale include fairy-garden materials. (513) 321-4458

6. Claiming to be the nation’s largest ceramics studio open to the general public, Funke Fired Arts is in a class of its own with highly accomplished artists as teachers and a wide array of classes. These include sculptural exploration in clay and classes that look deep into the meaning of use such as “Wheel 3, Tea; Explorations in Form, Functionality, and History” (tea time included). If you’ve been to the stylish Salazar or Nada restaurants you may have eaten off tableware made at the facility. Funke gives back, too, offering free workshops for teachers. funkefiredarts.com

Artists
9 & 10. New kids on the block Didem Mert and Jesse Rienerth both exhibited clay works at Brazee Street Studios in September. Mert merges fine arts with functional sensibility in her M&M Clay and Food Porn Project, a collaboration with foodie and photographer Lydia Morrison. didemmert.com Rienerth, a DAAP graduate and former Core Clay fellow, leans sculptural with sharp-edged works made of thin porcelain that look like ripped paper. Don’t touch! But you’ll want to. On her blog, Rienerth writes, “I have begun to make more installation work, because I am addicted to making things that are big and fragile and scary.” coreclay.com/JessieRienerth

11. Christie Goodfellow, proprietor and founder of CG Ceramics in Covington, makes functional art: earth-toned, modern-style tableware that is stunning in its simplicity.

“My glazes are pretty minimal,” she says. “I leave a lot of my exterior surfaces unglazed for an appreciation of the material. It’s a tactile thing—pottery lends itself to being picked up. It’s meant to be in your hand and interacted with.”

12. Kirk Mayhew, a teacher at Thomas More College and Funke Fired Arts, has a reputation for architectural/sculptural works of humor and intensity—sometimes playing with scale, or, as he explains, “taking figurative components and making them exaggeratedly large, then miniaturizing other [common objects].” In one series, he created actual bricks of various sizes. Recently, he has gone deeper into exploring clay itself, using white-bodied and red-bodied clays in the same pieces. But behind the freedom in his ideas, there is discipline: “I know that if I’m technically accurate I can be very free with the forms,” he says.

13. Cincinnati artist Jaime Iliff harvests clay for his one-of-a-kind functional pieces from the banks of the Great Miami River and other local waterways. He also makes his own glazes, using recycled bottles mixed with wood ash or other materials, like copper or cobalt. Tracy Iliff, Jaime’s wife and co-owner of Jaime’s Art Pottery, says all of their pieces contain local clay, usually mixed with commercial: “We dig the clay out of local streams and we make that into the slip…that’s what makes it look different, and that’s what makes it ours. We try to stay with a more organic approach so our pottery doesn’t look mass produced.” jaimesartpottery.com

14. Lebanon artist Mike Baum—who owns Baum Pottery with his wife, Karen—makes high-fired stoneware fit for everyday use. The forms are influenced by classes he took in North Carolina taught by the late Byron Temple. 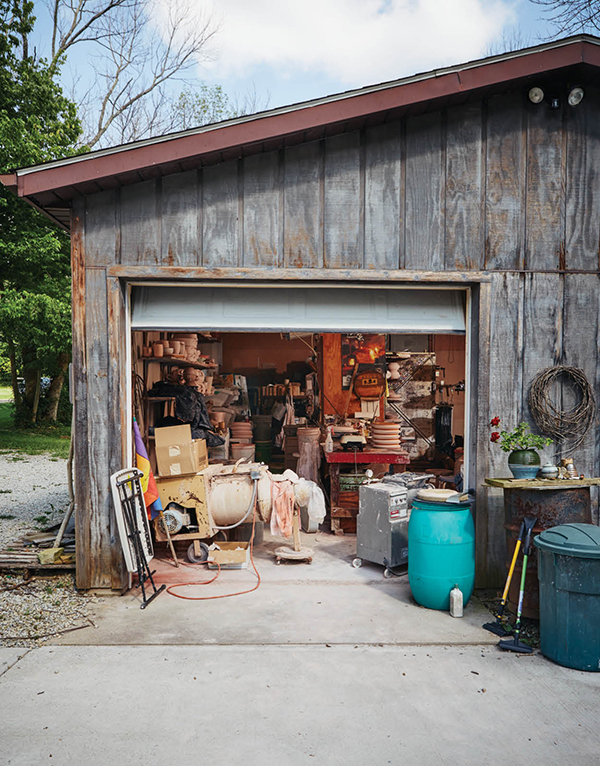 In addition to technique, Baum says, Temple instilled in him an appreciation for the knowledge-sharing culture of professional potters. Baum mixes about eight glazes. “Some of [them],” he says, “I got from English potters, some are Chinese or Japanese glazes. Most potters will freely give of their glazes. I have no secrets as far as my glazes go—that’s how it should be.” Every spring, Baum Pottery hosts an open house, which includes demonstrations of technique. baumpottery.com

A Clay Club
15. The Clay Alliance of Greater Cincinnati is a nonprofit, membership organization. Based in the Essex Studios in Walnut Hills, the Alliance serves as a clearinghouse for clay arts information and runs a semi-annual pottery fair (in East Walnut Hills and at the Clifton Cultural Arts Center). Alliance members teach at all of the major clay outposts in the city. Prerequisites? Anyone interested in clay can join. clayalliance.org

Clays Gone Wild
Diggin’ the stuff straight from the earth.

Iron and lime
Clay, that ineffable, magical mix of iron, lime, silica, and other earthy stuff, comes in many variations, ranging from those that need extremely hot kiln temps, like porcelains, to cooler fires, like rakus, which are often used in Japanese tea-ware.

Geography bee
The color of clay gives clues to its provenance: The clay found in northern Ohio is said to be yellowish after it’s fired, while here in the Cincinnati-Kentucky area, higher levels of iron give some clay a reddish tinge.

Big Dig
While most ceramicists buy their clay from commercial suppliers, a few intrepids score their own from the original source: the earth. Artist Didem Mert says she has harvested “wild clay” from a creek bed near NKU, Stanbery Park in Mt. Washington, and a friend’s property in Burlington, Kentucky. “It’s a really good process to go and get your own clay and process it [removing sticks and pebbles]. It brings you back down to earth…to what people had to do in the past to make their wares.”

Buyer’s Choice
Not into learning so much as purchasing? There are boutiques for that. Look for a good selection of ceramic wares—many from area creators—at MiCA 12/v (shopmica.com), Fern Studio (fern-shop.com), Indigenous (indigenouscraft.com), Park + Vine (parkandvine.com), and Continnum (facebook.com/continuumbazaar). Or go historical: Rookwood Pottery Company’s mothership is located near Findlay Market (rookwood.com). The century-old company’s American Arts & Crafts–inspired tiles, bowls, and other wares are available nationwide, and also have a dedicated section in the Cincinnati Art Museum. Get a piece of your own at their Gateway Quarter storefront.