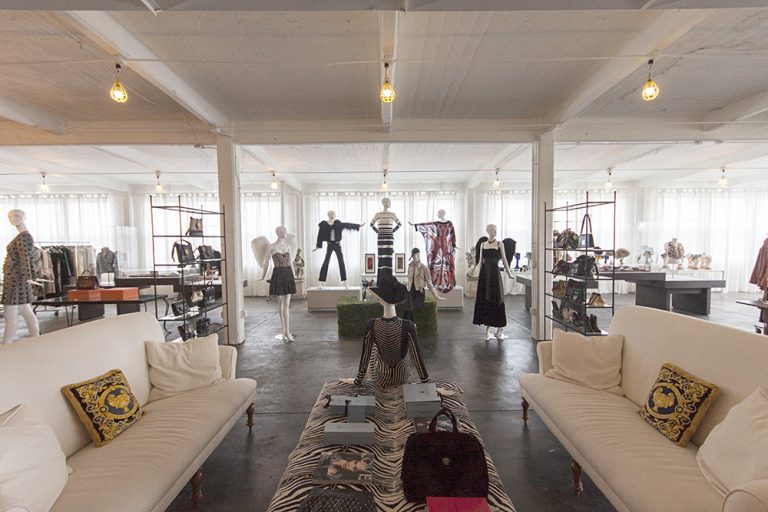 It’s fair to say that Tony Tiemeyer knows a thing or two about fashion. Evolution Studio, his high end vintage studio in Northside, houses some of the biggest names in the fashion world. Designs by McQueen, Alaia, and Dior lounge elegantly in Evolution’s showroom, waiting to be snatched up by a jet-setting socialite on 1stDibs or called in for a photo shoot. When major fashion editors have you on speed dial, you’re doing something right.

So when I ran into Tiemeyer (at Weisnkoenig, no less) and learned he’d received an influx of couture, I made a beeline for the showroom.

“This is new for me,” says Tiemeyer about his couture venture, which came about when a 1stDibs client who wanted to consign pieces she’d acquired in Paris in the ‘80s contacted him. Note that true haute couture is regulated by the Chambre Syndicale de la Haute Couture, and Tiemeyer vets each item accordingly: “I research everything.”

The couture pieces displayed on the mannequins (many of which were acquired from the Art Museum’s Rudi Gernreich exhibit) are a master class in luxury: a Valentino Haute Couture silk skirt suit with exquisite seed pearl embroidery, an emerald green Nina Ricci dress with a built-in leather belt and matching sable-trimmed hooded shawl. The craftsmanship is second to none, marked by hand stitched, multi-zippered internal structure designed to make waists look smaller and boobs sit higher.

Throughout the studio, there’s a good selection of classic pieces (including this Chanel coat that haunts my dreams), but this is not your grandma’s vintage. “I LOVE accessories,” enthuses Tiemeyer, leading me to a case filled with Chanel and Lanvin costume jewelry. He’s also started dabbling in menswear, including pants from ‘90s mainstay Todd Oldham and wild child designer Jeremy Scott.

Tiemeyer is a master of balancing time-honored wardrobe staples and bold statement items—everything has just enough of an edge to stand out without veering into tacky territory. And while it’s great to have a foundation of classics, “I want stuff that’s just crazy,” he laughs.

Keep up with Evolution Studio at www.evolutionfashionstudio.com, 1stDibs, and on Facebook.