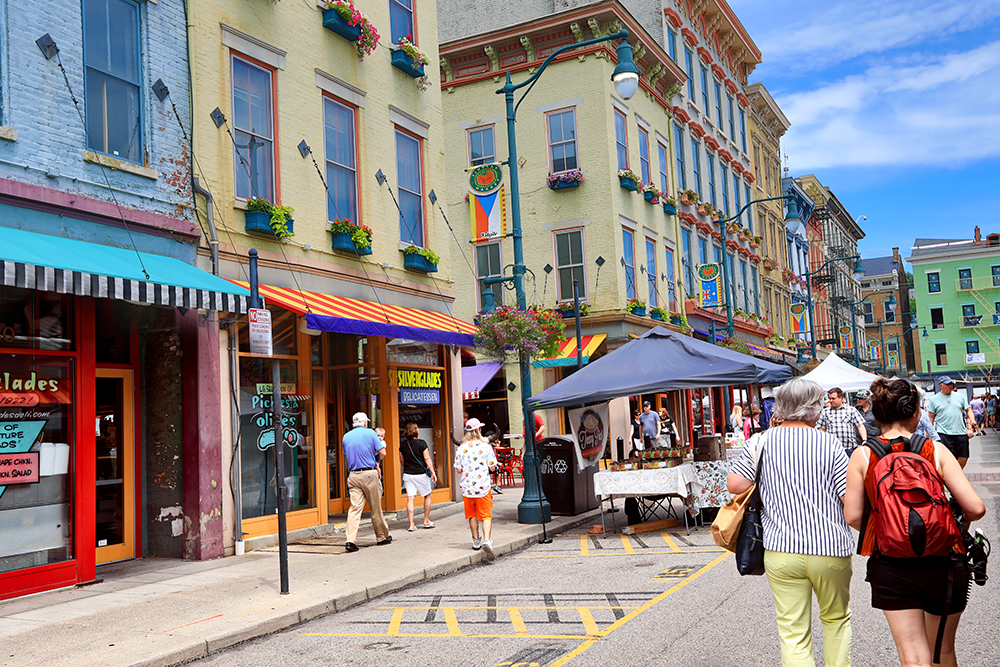 Reunion Clothiers
“Well, we met in a thrift store,” says Cale Darrell, co-owner of Reunion Clothiers, talking about how he and Frank Welling, Reunion’s other owner, first connected.

“We went on a lunch date after that, and that’s kinda where it started.” After that first meeting—at St. Vincent de Paul in Northside—Darrell and Welling (at left) became friends and started seeing a market in Cincinnati for vintage clothing. With almost 20 years of picking through racks of old clothes at flea markets and thrift stores between them, Darrell and Welling, both 32, decided to open up shop. “I had been making money and seeing a lot of demand online,” says Darrell. “I would usually just buy cool stuff that fit me,” jokes Welling. With their well-trained eyes, they started to expand their collections, and opened a 1,000-square-foot space on Main Street in Over-the-Rhine in April 2017. Vintage rugs cover the floors, a worn-in leather couch sits in the corner, and army issue jackets, vintage jeans, and baseball jerseys from the 1930s line the walls. “We don’t just sell stuff because it’s old,” says Welling. “You’ll never see disco shirts in here.”

Reunion has a heavy focus on military issue clothing (not surplus) dating back to World War II up through the Vietnam War. “Military gear was made to last,” says Darrell. “You’ll see a military jacket with jeans at J. Crew, but our stuff has been around the block and is the real deal.” Like a 1935 ROTC sweatsuit, priced at $750. Not every piece is a high-ticket item: there’s also a $5 bargain bin. Reunion strives to please the casual shopper as well as hardcore collectors. “We want to have the basics for people,” says Darrell. “Clothes that all the big box retailers are trying to mimic. We want it to be approachable.”

Filling a storefront full of curated vintage clothing isn’t easy, but that’s what makes it fun for the owners. Darrell and Welling visit local and regional thrift stores and markets every day of the week. “You have to get there early, that’s where the real work comes in,” says Darrell. “When you get up at 5:30 in the morning to visit a shop north of Dayton with enough time to get back down here and open up the shop. It’s worth it—to see someone find that perfect piece in our store.”
Want to check out their collection from your computer? Reunion sells some of their specialty pieces on Instagram and Etsy. They’ve shipped all over the country and as far away as Japan.

We Have Become Vikings
“I don’t know of too many places that do what we do, where we can do the design and the printing and do it with community-minded means,” says Jason Snell, co-owner of We Have Become Vikings. He and fellow owner Brandon Hickle are sitting in the back office of their Over-the-Rhine design and screenprinting shop, which opened on the corner of Walnut and 14th Streets in April 2016.

There’s nothing particularly maverick-y about a graphic design company in Cincinnati—or a screenprinting operation, for that matter. It’s the all-in-one package offered by the multihyphenate firm that makes them stand out. They can do everything for you right here, under one roof, without all the corporate red tape. All while you browse for T-shirts and hats.

Snell spent years working for design agencies in Seattle, Austin, New York City, and Cincinnati before hanging his shingle with We Have Become Vikings back in 2008. (“I just wanted a crazy name,” says Snell. “Vikings are rad, and I learned that the term ‘branding’ came from Vikings.”) He started with a tiny, secluded office on Vine Street, but craved a more visible, hands-on presence, which led to teaming with Hickle, who previously ran Southpaw Prints. They both recognized the inherent convenience of combining design and screenprinting forces. “I looked at this big-agency model and felt like it wasn’t sustainable sometimes, because stuff takes so long to get done,” says Snell. “We can design and prototype something and do it fast.” That solution is as advantageous for Fortune 500s like P&G on a tight deadline as it is for the coffee shop around the corner that needs new merch, stat.

“I got into printmaking because I was interested in design,” says Hickle. “To have all of that under one roof, it’s something I wanted for a long time.”

The Walnut Street location also affords creative therapy, providing storefront space where they can sell merchandise and show off their own projects. All the attire is American made and designed and printed in-house, with the built-in benefit of sidewalk advertising for potential clients or collaborations (like those they’ve done with ArtWorks, People’s Liberty, and Great Oaks). No more hiding in plain sight.

“As much as we can, we have our door open,” says Hickle. “It’s just rad to stop and talk to someone who’s curious or interested, because you never know where that will lead.”

In the market for a singular custom T-shirt? The shop’s new One Off design kiosk (also online) lets you design a shirt to your liking and pick it up in the store. You can even watch them print it.

“I’ll get 80-year-old men coming in to buy something, and then 30-year-olds. No one is intimidated,” Broeman says. “It always bothered me when I walked into a store and I felt like it was designed just for one kind of style. I didn’t want that; I wanted to pick out different pieces and have my own look [and] not be stereotypical. I like surprises.”

Opening her own place is the culmination of Broeman’s years of dreaming and traveling. Broeman, a Florida native, opened the shop in November 2016, just a few short months after she and her husband moved back to the States. The couple had been living abroad for 12 years, during which she’d been a retail buyer at a large department store chain in Cape Town, South Africa, and spent time traveling and working in England, Australia, and Egypt. Prior to that, she studied fashion design at Moore College of Art and Design in Philadelphia and art history at Columbia University, and spent almost six years as the head of contemporary art appraisals for Sotheby’s in New York.

“I’d always seen so many things I loved in the different places I lived,” Broeman says. “I think there’s kind of a need for this today, of [being exposed to] what is actually different and beautiful in different places.”

As for the shop’s longer-than-a-Graeter’s-line-in-summertime name? “People have so many ideas of what is beautiful,” Broeman says. “I thought that leaving the interpretation of ‘The Most Beautiful Thing in The World Is…’ [up to others] was a fun starting point. And I really liked that it was an incomplete phrase. It leaves more [to the imagination].”

The Most Beautiful Thing In The World Is, 6 W. 12th Street, Over-the-Rhine, https://www.themostbeautifulthingintheworldis.com/