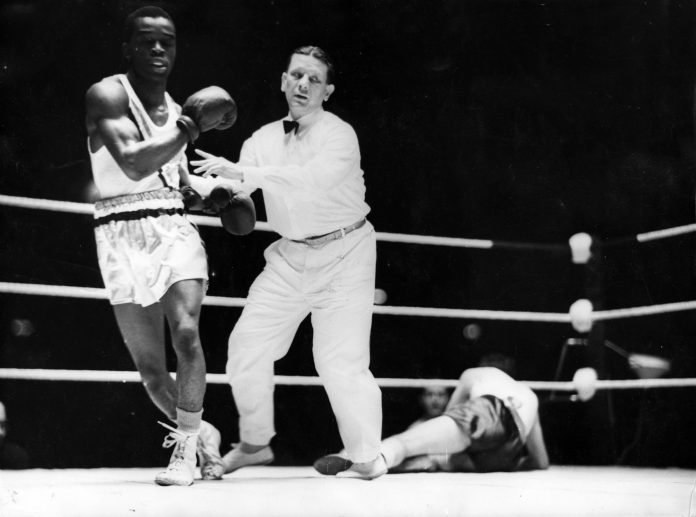 In the lengthy and illustrious history of Cincinnati boxers, there is perhaps no legacy more tragic and oft-forgotten than that of Wallace “Bud” Smith. Born April 2, 1924, and a resident of Avondale for most of his life, Smith was a three-sport star Woodward High School, excelling most in boxing.

After winning the 1948 Amateur Athletic Union Lightweight Championship, Smith was a favorite to earn a spot on the 1948 Olympic team, which he did with ease, dominating collegiate champion Chuck Davey of Michigan State to secure his ticket to London. Smith cruised to the final four in London, dispatching Masoud Rahimiha of Iran and Manuel Lopez of Argentina on points, and scoring a rare Olympic knockout—Olympic boxers wear protective head gear—against Brazil’s Raul Zumbano, who was the only other lightweight in the ’48 Olympic tournament to notch a KO. In the semifinal round, Smith, the favorite of many at this point, knocked down Belgian Joseph Vissers in the first round, but eventually lost on points after badly punching himself out going for the early finish. Vissers eventually took the silver medal, while Smith was resigned to a bronze medal bout against Svend Wad of Denmark.

But it seems likely that the match with Wad never actually occurred. All historical records show that Wad won the bronze medal via “walk over decision,” meaning, in one way or another, that Smith did not present himself to fight once his name was called by the announcer. No living boxing buff I was able to contact, nor any record I found, could shed any light on what may have led to that decision. The explanation as to what exactly transpired in London may be lost to time.

When Smith returned from the Olympics, he was touted as one of the most promising young fighters in America, which did not merit the same benefits that modern boxing starlets receive. Smith knocked out Torpedo Tinsely on November 29, 1948 in his professional debut at Music Hall Arena, but was soon facing seasoned veterans, the kind that young boxers of today would wait years to fight. Of his first 10 professional bouts, six came against fighters with at least 20 victories to their name. The unusual amount of early damage would catch up to him, as he endured a six fight winless streak between 1950 and 1951. Smith revitalized his career though, and his fan-friendly take-a-punch-to-give-a-punch style, combined with a few televised victories, led Smith to a shot at Jimmy Carter’s World Title in 1955. On June 29, at the famously hot Boston Gardens, Smith and Carter went 15 rounds in a fight that remains both one of the most lauded lightweight title bouts in history, and a gory, poignant example of why boxing matches are no longer allowed to go past round 12. Landing a number of damaging left hooks throughout the fight, and causing more sizable damage inside, Smith, a betting underdog, was crowned champion of the world, via split decision.

Four months later, Oct. 10, 1955, the two men squared off in a rematch, this time in at The Cincinnati Gardens, then just six years old and still one of the great sporting venues in America. Smith nearly succumbed to a left hook from Carter in the 13th round, but when the bell rang after the 15th, Smith’s hand was raised once more, this time via a unanimous decision. The two title fights between Smith and Carter were the type to take years off careers—if not lives—and it did for both, as neither man was ever the same. Smith lost his title to Joe Brown the following year and never won again, losing the final 11 bouts of his career and absorbing a terrible amount of damage in the process. He finished his career in 1958 with a record of 31 wins (18 KOs), 24 losses (7 KOs), and 6 draws.

Smith, like so many champion boxers of the era, had very little financial gain to show for the carnage he delivered and received during his career. He returned to Avondale, where he was said to often be identified by a cowboy hat he frequently wore. Although he had frequent run-ins with the law, usually for gambling, Smith was popular in the areas he frequented. The first sentence of the Associated Press article on Smith’s death described the former champion as “a likeable sort,” which perhaps explains why he hailed Dolores Watts to chat after she had publicly argued with a man on July 11, 1973. According to the AP, Smith was unaware of the argument, while other sources say he broke up a physical fight between the two. But what is not disputed is that John Lamar, 36, of Cincinnati, approached Smith and Watts in his vehicle and exchanged words with Smith before shooting him in the head as he drove away, killing the 49-year-old Smith on the 400 block of Erkenbrecher Ave. in Avondale.