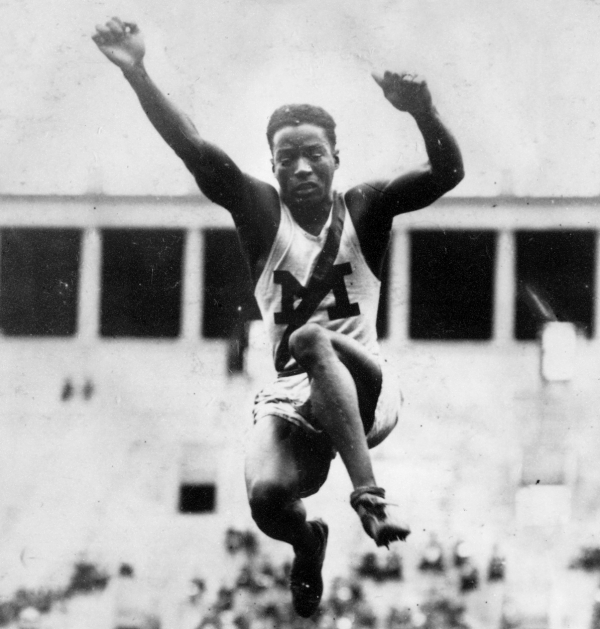 On a Monday in 1924, William DeHart Hubbard penned a letter to his mother.

“The boat leaves in about an hour,” he wrote, awaiting the departure of S.S. America, the ship that would take him to Paris for the 1924 Olympic Games. “Tell Papa I got his letter…tell him I’m going to do my best to be the FIRST COLORED OLYMPIC CHAMPION.” The last four words were written in all-caps and the word “colored” was underlined twice. Before Jesse Owens stared down Nazi Germany, before Tommie Smith and John Carlos raised their fists, it was a kid from Cincinnati who made history.

Hubbard grew up on Whittier Street in Avondale and attended Walnut Hills High School, where he starred on a football team fractured by race. In 1916, the year before Hubbard enrolled at Walnut Hills, parents of white students threatened to have their children walk out of the school after African-American football players walked on the portion of the school yard reserved white athletes. “Things have come to a point where we no longer will be in the same school with the negroes,” one parent told The Cincinnati Enquirer.

Hubbard’s talent led to more friction, with opposing teams deciding to protest his inclusion on the team. The school board decided to disqualify him, leading to more protests. Except this time, the football team united behind their star.

“His teammates said that if he couldn’t play, they wouldn’t play, and they forfeited the balance of their season,” says Hubbard’s nephew and former Cincinnati mayor Kenneth Blackwell. “It was a great show of school spirit and school unity and it showed that in the early 1900s there was sort of a ban against injustice.”

Hubbard also starred on the track team in high school, and that would earn him his ticket to Paris. He qualified him for three events: “the high hurdles, the long jump, and the 100-yard dash,” says Blackwell. Hubbard saw the dash as an opportunity to outrun Scottish athlete Eric Liddel and prove to the world that he was the fastest human alive. Those hopes were squashed when he was told that the 100-yard dash and the hurdles were white events only. That left him with one opportunity to win Olympic gold: the long jump.

Marred by a bruised heel as a result of an over-the-line foul, it wasn’t until Hubbard’s sixth and final jump that he made history. He leaped 7.445 meters—equivalent to more than 24 feet—through the air and into the dirt to become the first African-American Olympian to win gold in an individual event.

After returning from Paris, Hubbard graduated in the top of his class at the University of Michigan, a school he attended thanks to a scholarship from the Enquirer, which referred to Hubbard as “one of the greatest athletes who ever attended Cincinnati schools.” While at Michigan, he broke Big Ten records in the long jump. After graduation, he continued to compete, setting the world record in the indoor broad jump by “flying through the air like a meteor,” according to The New York Times. Hubbard cleared 24 feet, 7 ¼ inches in 1926, shattering the previous record by nearly a foot.

After hanging up his track shoes, the only job Hubbard could get at the time in Cincinnati was as a playground director with the Cincinnati Public Recreation Commission. “He was never a guy to cry in his soup,” says Blackwell. So he took advantage of the opportunity to develop talent on the playgrounds of the city and founded a baseball team called the Cincinnati Tigers in the American Negro League, which would would later form a partnership with the Cincinnati Reds. “Whether it was intellectual talent or athletic talent, he put the time and effort against developing talent,” says Blackwell.

Hubbard eventually took his own talent of engaging the public to a job in Cleveland working for the Federal Public Housing Authority. He remained in Cleveland until his death in 1976, but his name and the appreciation for his contributions to the region remain. In addition to the many halls of fame in which Hubbard is enshrined, Walnut Hills High School honors his battle against injustice with its annual DeHart Hubbard Invitational track meet at the stadium that bears his name. Riverfront Transit Center pays homage to Hubbard with his portrait that lives chiseled into the wall that connects Great American Ball Park and Paul Brown Stadium.