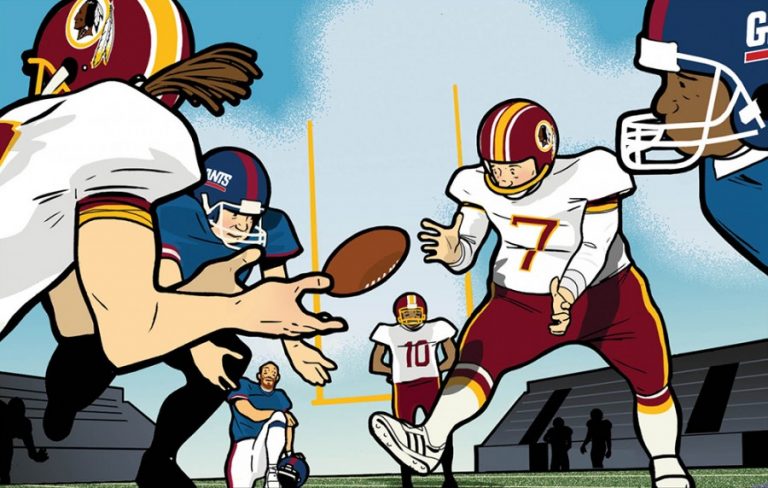 Chris Bachelder remembers watching it on Monday Night Football as a 14-year-old in 1985: Washington Redskins quarterback Joe Theismann’s right leg snapping under the weight of New York Giants linebacker Lawrence Taylor. The play stuck with him, gnawing at his mind for decades. “I knew something was there, I just didn’t know what,” says Bachelder. It turned out to be his fourth novel, The Throwback Special (W.W. Norton & Company), which takes its title from the fateful playcall and tells the story of 22 men who gather every year to reenact it.

The book is structured in a manner familiar to the author, utilizing a somewhat esoteric, preposterous construct—grown men dedicating a weekend to the exhaustive reproduction of a five-second football play from 30 years ago—as a way of telling very real, genuine stories. “The book didn’t take off until I figured out I wasn’t really writing about football or the injury,” says Bachelder, an associate professor in the University of Cincinnati’s Department of English and Comparative Literature. “The Theismann injury wasn’t my subject, it was my context.”

Bachelder’s writing style shows little interest in traditional threads of exposition or character development, instead focusing on pace, setting, and point of view. There is no traditional protagonist, no backstory on how the annual custom started or how the men came to know each other. It’s merely an intricate portrait of one specific slice of this ritual, what Bachelder describes as a “Christmas tree novel,” circling the premise as opposed to confronting it head-on. “I really wanted it to be episodic, moment by moment, about the contours of the relationships and the psychology,” he says.

It also continues a shift in tone for the author from the heavily satirized voice of his early books (Bear v. Shark and U.S.!) to something more relevant to his current state: the realities of middle age. There’s a nostalgic aspect—the men continue this rite out of an unspoken and internalized fear of losing it, and reconcile the disenchantment with their own lives through the chaos they recreate on the field.

“You can call a play in the huddle, but when you come to the line of scrimmage anything can happen,” says Bachelder. “In middle age, you begin to realize that you don’t have control of your own life the way you thought you might.”

The Throwback Special by Chris Bachelder, on sale March 14