There are nine players on a baseball diamond, nine innings in a game. The Reds have now completed 1/9 of their season, so let’s dig into nine statistical nuggets that may be of interest to the average Cincinnati Reds fan, shall we?

1. You may have heard that, during the most recent off-season, the Reds signed Marlon Byrd to play left field with hopes that he would be a significant offensive upgrade. Yes, that’s old news to you, I’m sure. If you’re watching the games this season, you also know that Byrd himself is old news

To describe his performance as “pretty bad” would be a monstrous understatement; the 37-year-old Byrd has been an abject disaster at the plate so far in 2015. Take a look at this slash line through the club’s first 19 games: .164/.174/.239. Yep, that’s a putrid .413 OPS. His adjusted OPS+ is 16; a league-average OPS+ is 100. You won’t be surprised to learn that Byrd’s OPS and OPS+ are each the third-worst mark in the National League (and prior to Monday’s night game, were both dead last).

But wait! It gets worse. Byrd has struck out 21 times, and he has yet to collect his first base on balls of the season. That’s right, no walks. Heck, Byrd has only gotten to a 3-ball count twice this year. In this age of emphasis on on-base percentage, those numbers are almost unfathomable.

Well, we may not like Byrd’s no-walk streak, but it certainly isn’t unprecedented. In fact, Byrd’s streak of 67 at-bats without a walk to start the season is only the 16th-longest such streak in Cincinnati franchise history (among non-pitchers). Wally Roettger tops that list, failing to draw a walk in his first 87 AB of the 1933 season. Two years prior, Roettger had another top-ten streak, beginning the year with a 72 AB non-walk streak. Of course, ol’ Wally was a part-time outfielder, not a guy who was paid millions of dollars to mash baseballs. 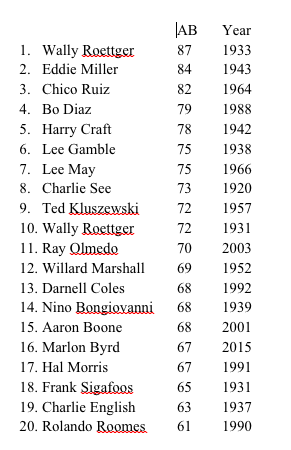 You will, I am sure, recognize plenty of the names on the list. Bo Diaz accomplished his feat just one season after being named to the National League All-Star team. Lee May and Ted Kluszewski are two of the more feared hitters in Reds history. May was just a rookie when he failed to walk in his first 75 AB of the 1966 campaign. Kluszewski’s streak followed four straight seasons where he made the NL All-Star team and finished in the top-15 of MVP voting

In addition to Byrd, two other players on this list were in Cincinnati over the weekend; Morris and Roomes were celebrating the 1990 World Series championship.

So we probably shouldn’t pile on Marlon Byrd too much, at least not yet. Just below him on this silly little list are Tony Perez (61 AB in 1967), Brandon Phillips (59 AB in 2006), and Johnny Bench (59 AB in 1970, his MVP season). This is more of a statistical oddity than anything else. There’s plenty of time left in the season, and I think we’ll agree that Byrd was an upgrade in LF once the dust settles on 2015. It would, however, be nice if he started hitting soon, no?

2. If you listen to Hall-of-Famer Marty Brennaman on the radio as he broadcasts the nightly titanic struggle, you probably think the Reds are hitting terribly with runners in scoring position. Brennaman criticizes the club nearly every single night for this perceived failing.

If you look at the numbers, you also have to concede that it appears the Reds are coming up short in those situations. In 159 plate appearances through 18 games (all stats prior to Monday night’s contest) with runners in scoring position this season, the Reds were hitting just .201/.293/.373, an OPS of .666. That seems pretty bad, until you realize that, in all other situations (without runners in scoring position), the Reds posted a team OPS of .618 (.219/.271/.347).

That’s right: the Reds hit better with runners in scoring position than they do otherwise. Someone needs to Ask Marty about that.

What does this mean? Not much. Votto has actually cooled off significantly the last few days. But a healthy Votto is a great Votto, and the current version is as good as he’s ever been in some ways. We really need to enjoy watching this guy play every day while we can.

7. Let’s look at the offensive struggles from a different angle, by taking names out of the equation and just looking at the various spots in the lineup. The Reds are hitting better than league average at only two different spots in the lineup: the 2nd spot and the 8th spot. Every other position in the order is below average, significantly so in most instances.

And take a look at the cleanup spot, traditionally a position in the lineup where you put someone who can mash the baseball on a regular basis. Reds cleanup hitters are hitting a paltry .250/.269/.250 with zero doubles, zero triples, and zero home runs.

As famed Reds stats guru Joel Luckhaupt (you really should follow him on Twitter, right now) has noted, there are only three lineup positions in baseball that have not collected an extra-base hit: the Reds’ 4th spot, the Pirates’ 8th spot, and Cincinnati’s 9th spot. That’s a complete embarrassment.

8. If you squint, you can talk yourself into being pretty happy with the production from the #4 and #5 spots in the Cincinnati starting rotation. Certainly, Anthony DeSclafani has been superb. After four starts, “Disco” DeSclafani is 2-1 with a 1.04 ERA (3.25 FIP), 21 strikeouts, only six walks, and an ever-improving changeup.

The other guy, Jason Marquis, is also 2-1, with a 24:7 strikeout to walk ratio. Though his ERA is 5.48, Marquis’ FIP is significantly lower, at 3.71, and…forget it. I’m just putting lipstick on a pig at this point. Marquis hasn’t been as bad as we expected, perhaps, but don’t bet the ranch on him being an acceptable starter for the remainder of the season/

But, hey, how about that Disco guy?

Even the glorious Big Red Machine of 1975 only began the season with nine wins in their first eighteen games. Now, I wouldn’t advocate printing playoff tickets just yet, but they team did win last night—9-10 is better than 8-11, yeah?

Chad Dotson is a Nuxhall Way contributor. He is also the founder of Redleg Nation and a contributor to ESPN’s SweetSpot blog. You can follow him on Twitter at @dotsonc.