Home Sports Baseball All We Need is Just a Little Patience 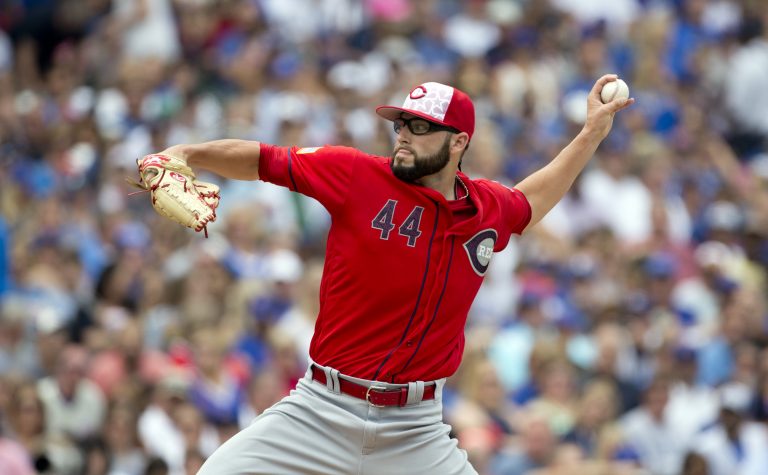 Perfection is attained by slow degrees; she requires the hand of time. —Voltaire

Be patient with me here. There’s something we need to discuss.

Before Cody Reed’s big league debut last month, we were inundated with tales of his exploits in the minor leagues. Sixty-three strikeouts in 64.2 innings at Triple-A Louisville at the tender age of 23. A record of 6-2 with a 2.17 ERA for Double-A Pensacola after joining the Reds organization last summer. Dominating performances at every level since being promoted to High-A.

It’s not just the numbers that look good; scouts have raved about Reed’s abilities, as well:

Reed had one of the best 1-2 pitch combos in the minors before his promotion. Reed can spot his mid-90s fastball to both sides of the plate. That kind of velocity from a lefty starter is still quite rare. While there are 15 righthanded starters among league qualifiers who are averaging 94 mph or better with the four-seamer, there are no lefty starters among qualifiers who sit 94 mph or better.

But as good as Reed’s fastball is, it’s his mid-to-high-80s slider that is his best pitch. Numerous scouts are willing to give it a plus-plus grade. As Ben Badler wrote earlier this year, Reed’s slider is something he’s comfortable throwing early or late in the count. It dives away from lefthanded hitters (who are hitting .239/.320/.373 against him), but it’s nearly as effective against righthanders (.247/.294/.346) as Reed will bust them in with back-foot sliders that start out in the zone before diving out of it.

Now for the bad news: in five starts for the Cincinnati Reds, Cody Reed is 0-4 with an ERA of 8.39. He’s allowed nine home runs in 24.2 innings at the big league level.

Get that guy on the first Uber back to Louisville, right? That’s what you’ll soon read on Twitter and hear on talk radio, if you haven’t already.

Like Reed, Brandon Finnegan is 23 years old. After his first three starts, Finnegan’s ERA was 2.04 and he looked like a guy that never got rattled on the mound. He was a little up-and-down in April, but at the end of the first month, his ERA was a respectable 3.86.

Why don’t the Reds send him down to Triple-A instead of letting him butcher games every fifth day?

How about Robert Stephenson, also age 23? Stephenson pitched pretty well in his first two MLB starts earlier this season (2-0, 3.00 ERA), and has widely been considered the top pitching prospect in the Reds organization over the last few years. On the other hand, he hasn’t exactly dominated in Triple-A this year (and by some metrics, his big league performance was not as good as Reed’s has been). When he is promoted to the majors for good, he’s likely to struggle occasionally.

Let’s talk about one more guy before I get to my point—I promise, there is a point to this exercise. Amir Garrett just turned 24, and earlier this week, he pitched well in the All-Star Futures Game for the second consecutive year.

Within the last year, Garrett added an outstanding changeup to his repertoire, and the result is that he’s been the most dominant pitcher in the entire organization in 2016. In 16 appearances across two levels (Double-A and Triple-A), Garrett has a 1.98 ERA with 90 strikeouts against 38 walks. Don’t be surprised, however, if he is wildly inconsistent when he joins the big league club (perhaps later this year).

All human errors are impatience, a premature breaking off of methodical procedure, an apparent fencing-in of what is apparently at issue. —Franz Kafka

This, of course, is the point: young pitchers are inconsistent. Young pitchers can struggle mightily in their first taste of the big leagues. Even pitchers who are destined to be standouts have been known to pitch terribly early in their careers.

The next time you hear some talk radio caller demanding that Cody Reed be sent back to Triple-A, there are a few names I’d like you to remember. Names like Dallas Keuchel and Jake Arrieta.

When Brandon Finnegan gives up eight runs in 2.1 innings again, and someone is ranting on social media that the kid is awful, go take a glance at Greg Maddux’s early career numbers.

Perhaps you’ll be listening to the radio on a lazy Sunday afternoon, and you might hear a local broadcaster say: “Frankly, we’ve seen very little improvement in these young pitchers, and in some cases, none at all.” Or maybe he’ll say, “This kid has made 17 starts now, and he’s no better than he was when the season began.”

If that happens, do me a favor: let your mind drift back to our old friend Johnny Cueto.

*Keuchel also holds the record for worst mispronunciation of his name, overheard by me during last year’s All-Star parade in Cincinnati.

Like Keuchel, Chicago’s Jake Arrieta won his league’s Cy Young Award last year. Between the ages of 24 and 26, Jake Arrieta pitched three full seasons in the majors. His numbers over those years: 19-23, 5.33 ERA. Last year, 29-year-old Arrieta went 20-6 with a 1.77 ERA and three shutouts.

At this point, I’m sure that you see where I’m going with this, but let’s push forward. How about Greg Maddux? You remember Maddux: 355 career wins, first-ballot Hall of Famer. He ended up being pretty good at pitching baseballs, but in his first two seasons, Maddux had real problems: 8-18, 5.59 ERA. (Similarly, look at his Hall of Fame teammate Tom Glavine’s first two seasons.)

That brings us to Johnny Cueto. Who can forget Cueto’s debut for the Reds at age 22, when he limited Arizona to one run on one hit over seven innings, striking out ten Diamondback hitters. It was beautiful, it was dominant, and it was a preview of things to come.

Over his first two seasons, however, Cueto mixed those flashes of brilliance with moments when he seemingly couldn’t throw a strike when he needed one, or when he displayed what seemed like a little immaturity on the mound. Going into his third season, Cueto’s career numbers were just 20-25 with a 4.61 ERA.

Famously, that same radio broadcaster I mentioned above had this to say, after a particularly frustrating moment during Cueto’s second season: “Frankly, I’m not sure this kid is ever going to get it.”

That young pitcher “got it.” Perhaps you saw him starting the All-Star Game this week?

I can’t tell you that anyone in Cincinnati’s basket of talented young arms is going to turn out to be a big-time pitching star. No one knows whether Reed, or Garrett, or any of these guys (including Raisel Iglesias, Michael Lorenzen, and John Lamb) will become All-Stars or Cy Young Award winners. There’s a lot of talent in that group, but I’m certainly not going to bet the ranch on any of them.

What I can tell you, however, is that baseball history is littered with the names of All-Star pitchers—and even Hall of Famers—who were wildly inconsistent in their first exposure to big league pitching. That’s because pitching at the major league level is difficult! MLB hitters are the best in the world, you know. Learning to get those hitters out is a process, one that takes time for almost every young pitcher.

I can promise you that the Reds are going to be patient with these young guys. What do they have to lose, after all? They’re already losing plenty of baseball games. But once these guys get some experience, once they learn how to attack big league hitters and make adjustments, there’s a pretty good chance that some of them, at the very least, will end up being valuable contributors to the next good Reds team.

I’m going to be patient. Can you?

Patience and perseverance have a magical effect before which difficulties disappear and obstacles vanish. —John Quincy Adams

Update: This article has been updated to reflect that Cueto’s first start was against Arizona, not San Francisco. Regardless, he still kicked ass that game.