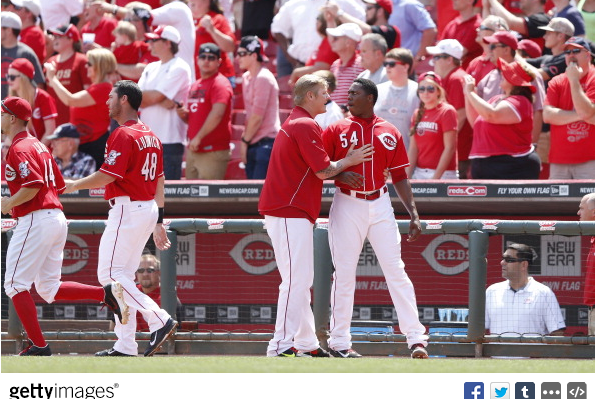 After a chilly first few months, the National League Central race burst into a raging inferno during June. Championship hunts, wild-card implications, and season-swinging sweeps are all already in play, and we’ve barely hit July.

Crank up that A/C.

1. Milwaukee Brewers (52-41) Heat check: An icy splash of cold, hard reality. The Brewers could lose out from now until then and still enter the All-Star break as one of the surprises of this MLB season. But things are less toasty in the valley of Bernie than they were a month ago—or even a week ago. Milwaukee has now lost nine games out of ten after another home defeat to Philadelphia last night and seen its division lead shrink to fewer than three games. The Brewers have fallen into those only-in-baseball slumps, bats heating up during a pitcher’s implosion and cooling off during gems.

2. St. Louis Cardinals (50-43) Heat check: The steady burn of a few-years-old George Foreman grill. Yeah, yeah, this recent winning streak (halted by a 9-1 loss to the visiting Pirates last night) has resulted in a sudden surge up the standings. But the Cards have been there all along, the constant shadow in Milwaukee’s rear-view mirror it never could fully speed away from. Never too hot, never too cold, that reliable temperature has St. Louis right back in the mix.

3. Cincinnati Reds (49-43) Heat check: The soul-melting sear of Mr. Red’s white-hot glare. Have you seen his eyes? Completely colorless, but with pupils, for some reason—the stuff of childhood nightmares. The team he supports has been equally terrifying in recent weeks. Fine, four of those five straight wins came against the Zombie Cubs. And that San Diego stumble was discouraging. But Cincy was 18-10 in June. A few of the forever-fluctuating lineup pieces are falling into place (when they aren’t falling down and injuring themselves). And they’re just 2.5 back of the Central lead.

4. Pittsburgh Pirates (48-44) Heat check: The endless night of a 102-degree fever. You wake up shivering your ass off at 2 a.m. and weakly raid your closet for every sweatshirt you own. An hour later, you’re sweating through them, shedding layers and kicking off blankets. Then the cycle begins anew. The good news? The Buccos are still in the hunt despite uneven form, holes in the order and a bullpen for whom the Shark Tank nickname now seems like an insult. The bad? Dropping those first three games against St. Louis this week was just the latest in a long line of batterings at the hands of contenders, hinting that this might be as high as Pittsburgh climbs.

5. Chicago Cubs (39-52) Heat check: Mid-winter on the dark side of the moon. Look, it makes sense. The Cubs were never going to contend in 2014, even if they didn’t completely embarrass themselves during the opening salvo of the season. Dealing pitcher Jeff Samardzija to Oakland was a reasonable move in building for the future. But that doesn’t make Chicago any easier to watch. A six-game losing streak promptly followed before last night’s extra-inning win and looks to have set the tone for another painful stretch-run on the North Side.