Home Sports Baseball What to Expect When Devin Mesoraco Returns 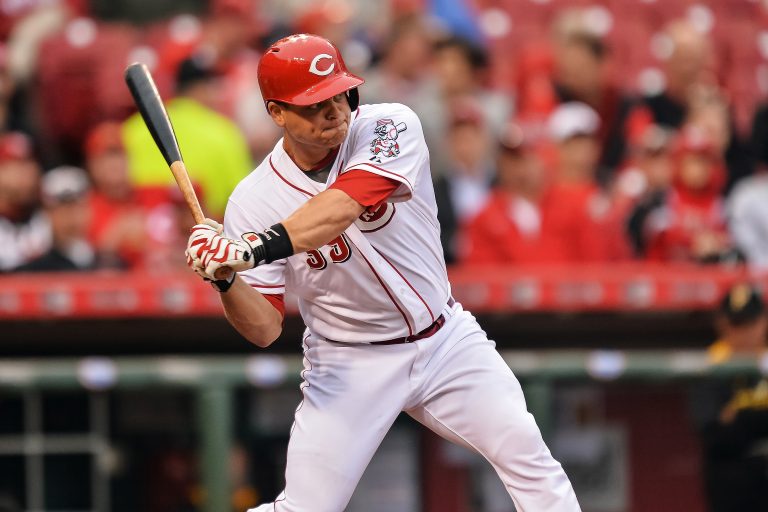 For the third consecutive season, we are talking about Reds catcher Devin Mesoraco and his injuries. This time, however, things are a little different. This time, there’s reason for optimism.

Hope can be a dangerous thing, when we’re talking about Devin Mesoraco. Remember 2014? Mesoraco was a revelation, a former first-round draft pick who established himself as a star in the big leagues. What a season that was: Mesoraco hit .273/.359/.534, with 25 home runs, a .387 wOBA, 146 wRC+, and 4.5 WAR. By almost any measure, it was one of the best seasons ever enjoyed by a catcher in Reds franchise history.

The league considered Mesoraco a star at that time, too; literally, Mesoraco was named a National League All-Star. Reds fans had high hopes for the career of the 26-year-old catcher. He wasn’t going to be the next Johnny Bench—there will never be another Johnny Bench—but there was no reason he couldn’t be a mainstay in the heart of the Reds lineup for years, right?

The Reds had a similar hope, rewarding Mesoraco with a four-year contract extension worth $28-million dollars. Then early in the 2015 season Mesoraco suffered a hip impingement and missed nearly the entire year.

As 2016 neared, hopes again began to rise—until barely one week into the season, when Mesoraco was injured again. This time it was a shoulder injury, necessitating another season-ending surgery.

Let’s sum things up. Since signing that contract extension, Mesoraco has undergone three surgeries: two on his hips and one on his shoulder. He has batted only 106 times, hitting a paltry .158/.245/.200 with no home runs and 3 RBI.

So here we are again.

Mesoraco has spent the past couple of weeks in Pensacola, Florida, on a rehab stint with Cincinnati’s Double-A affiliate. Reports on his health are all positive, and if this video is any indication, he’s is moving very well indeed:

That was the third full game of the week in which he caught all nine innings, which was one of the hurdles the Reds wanted him to clear before returning to the big club. Mesoraco did get banged up on that very play when the runner slid into his knee, but for now, all appears well. He caught nine innings the following day, and even went 2-4 at the plate. Manager Bryan Price said Mesoraco was a little sore, but insisted that there was nothing to worry about.

Previously, Price had outlined exactly what the Reds needed to see from Mesoraco before calling him up:

“We had a checklist of three boxes he has to check off,” Price said. “The durability factor—how does he feel after the back-to-back 9s? Is it realistic to think he could catch three games in the row without having any setbacks or causing any issues? How does he feel behind the plate? How’s he moving behind the plate? The flow of the game, getting his feet out from under him to block—will he be able to get out of stance and throw? That would be box No. 2. Box No. 3 is how he feels at the plate. Is he comfortable? Is he seeing the ball well? Is his swing where it needs to be?

“When those three boxes are checked off, we’ll bring him up to Cincinnati.”

Assuming the soreness he was experiencing after that collision really is a minor issue, Mesoraco seems to have checked off the first two boxes. The third box—hitting—is murkier on the surface, since he has only slashing .175/.283/.275 with a homer and 3 RBI in 40 at-bats. The Reds seem happy, though: “He’s starting to hit—not that the hits are important, but our staff like the quality of at bats in his last two starts,” Price told the Dayton Daily News’ Mark Schmetzer.

As of now, we can expect to see Mesoraco back in a Reds uniform this week, either against Milwaukee or the weekend series in St. Louis. And just what can we expect to see from the big guy?

Well, that might require a little more hope. Even the most optimistic among us should not expect 2014 Mesoraco. I’m afraid that guy is gone forever.

The ZiPS projection system—a computer algorithm that uses past performance and aging trends to develop projections for players—is not particularly rosy on Mesoraco, projecting a slash line of .238/.318/.430, with a .323 wOBA. Hardly 2014 quality.

On the other hand, those numbers are roughly league-average, which isn’t terrible. The wOBA, in particular, is far better than Tucker Barnhart has ever sniffed in his career. And that’s not a knock on Barnhart, who has done an admirable job in Mesoraco’s absence, and has even provided more offense than most would have expected.

So let’s suppose that Mesoraco can stay healthy and match his ZiPS projection. That would be a great development for the Reds. A Mesoraco/Barnhart platoon—and it will likely be a 50/50 sharing of duties, at least initially—stands to provide much more offense to the Redlegs than the current tandem of Barnhart and Stuart Turner. Mesoraco won’t be as good defensively as Turner, but on the days he’s in the lineup, he’ll provide more power than we’re accustomed to seeing from a Reds catcher since all these injuries started piling up.

And if he can start looking more like that 2014 Mesoraco that we all remember….

The Who once cautioned, “We won’t get fooled again.” The Reds can’t afford that either, and they’ve been working to find a solution in the event Mesoraco can’t return to form, or stay healthy.

But Reds fans, at least, can still remember. And hope.