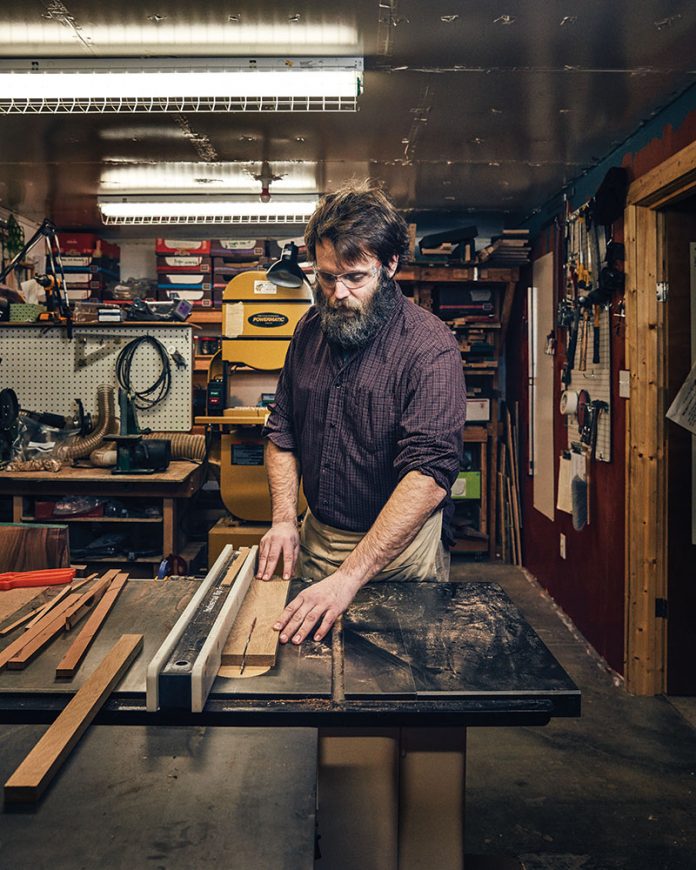 Roll up the gravel driveway to Don Clark’s home and workshop, and you get a peek into his life’s passion. Trees from his Milford backyard have been chopped, split, and turned into a sandbox, a playhouse, a fort, a handful of stepping logs, all scattered across the grass. There’s also enough firewood for a dozen winters, and it’s all courtesy of Clark. The man knows his way around wood, but his real work is done inside, in a compact, well-equipped space, and on a much smaller scale.

Clark started Happy Bungalow in 2011, selling a variety of handmade wooden toys and trinkets from his basement studio. It’s a creative outlet that he’s turned into a career.

“I kept sketch pads at work when I was miserable,” says Clark, who graduated with an architecture degree from the University of Cincinnati in 2003 and spent five years cooped up in cubicles. Then the recession hit, and Clark was laid off.

He found some contract work to pay the bills, but Clark began dabbling more in woodworking. He already had some experience, having received his first table saw after graduating college. With more time on his hands, he built a playhouse for his daughter and thought about turning that into a business. “Once I got into that, it was like, this is too much,” says Clark, citing the massive scale and his tiny shop. “So then I started with the smaller stuff.”

The smaller stuff included animals at first, then grew: cars, miniature furniture, and robots, each carved out of indigenous woods like oak, walnut, maple, and cherry with no staining. Within three years, a $20,000 wholesale order helped legitimize the business.

Clark enjoys creating from his own lively imagination. “All the ideas in my head, I get to make,” he says. He has also sourced ideas from customers at craft shows. Some even proved lucrative, like business card holders and tooth fairy wands.

Clark has big ideas for the future, too. He plans to write booklets and create posters that turn toys into characters. It’s an ambitious proposal, but that’s part of what Clark enjoys about his work. Whether it succeeds or fails, he is only beholden to himself. “I always wanted to not work for someone else,” he says. “The freedom is great. You can’t beat it.”