In the fall of 2016, Jeff Molski stumbled upon a Mid-Century Modern chair at Goodwill. Its price: $5. Knowing places like West Elm and Pottery Barn were selling similar pieces for substantially more, Molski, who says he’s “always been very handy,” bought the chair on a whim, “fixed it up,” and sold it online. Before long, he was hooked, searching for Mid-Century-Modern–style pieces to rehab from places like St. Vincent de Paul, Habitat for Humanity ReStore, Craigslist, and Facebook Marketplace.

By day, Molski works as ProScan Imaging’s director of business development, so his restoration work happens after hours in his basement or garage. His process includes cleaning, making minor repairs, removing old paint or stains, and refinishing. “I work on them like I want to keep them,” he says, noting that he rarely keeps anything, because Mid-Century Modern “is not my wife’s style.”

“Probably 75 percent of what I sell is sold on Instagram,” says Molski, whose Mid-Century Modern Rescue Instagram account has 2,500-plus followers, including American Pickers host Mike Wolfe and home repair guru Bob Vila. “I don’t sell things at exorbitant prices,” Molski adds, which is probably why “most of my items sell really fast”—sometimes before they’re even posted.

Most of Molski’s sales are to regional buyers, but he also delivers nationwide. His shipping method of choice? Greyhound bus. “It’s really inexpensive,” says Molski, who’s shipped pieces as far away as Oregon and California. “They even have tracking numbers online.” To date, he says, every piece he’s shipped via Greyhound has arrived intact and unscathed.

In two years’ time, Molski estimates he’s refinished about 100 pieces, including dining room and bedroom sets, end tables, an old British record player, a barber shop chair, and a 1964 pink fridge. “I’m not into the high-end, top-of-the-line stuff,” he says, just pieces that are “structurally intact.” Plus, he adds, “I never buy full price. It’s just a matter of principle.”

Someday maybe he’ll open a brick-and-mortar store; for now, he’s sticking with the day-job-slash-side-gig way of life. Either way, Molski doesn’t see business slowing down. “Nothing against Ikea,” he says, “but a 60-year-old office table is going to last. My theory is, things back then were just made so well.”

Some of Molski’s previous projects include: 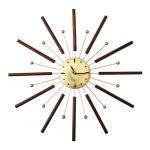 1. These popular sunburst-style clocks usually sell “within hours,” says Molski, who refinishes and converts them from electric to battery-operated. 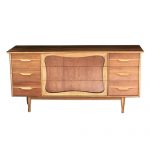 2. MCM furniture like this restored Unagusta-brand dresser is often “made with two types of wood,” Molski says. 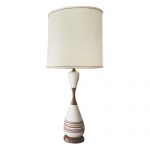 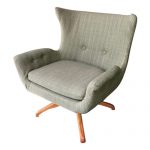 4. Molski says he only rescues upholstered pieces like this green swivel chair “if the fabric is in perfect condition.”

This Williamstown, Kentucky Cabin Is a Riverside Paradise