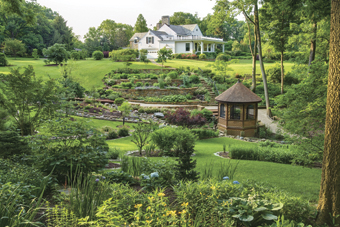 From the moment Nancy Rosenthal opens the door of her Wyoming home, it’s clear that she and her husband are gardeners. It’s afternoon, and a few streaks of earth are apparent on the knees of Ed’s jeans. They’re dressed for outdoor work, and they’ve been hard at it all morning. Despite dark clouds and a few raindrops, they’ve uncovered plants for spring, tidied up and mulched beds. Professionals assist with mowing and with pruning long stretches of shrubs, but gardening and the land became a primary focus for the couple when they moved into Birdwhistle, an estate originally built for three privileged, free-spirited sisters in the late ’30s.
“We are here [in the garden], full time,” Nancy laughs. “No, not [really] full time,” she says a little more straight-faced. “We do have another life, but we’re not golfers, we’re not tennis players. We’re gardeners.”
Nancy and Ed planted their roots at Birdwhistle in 1979. Their familiarity with the landscape is comforting. Nancy can point out the line of oaks and a screen-like row of junipers that were part of renowned landscape architect Richard E. Grant’s original 1937 design. She can point out the rocky bed that Ed mapped as a water run-off in the woods.

We meander through the more formal areas of the yard, with sculpted beds that nurture perennials, annuals and collections of specimen trees and later take a walk along the woodland trails built by Ed, where she calls attention to a Harry Lauder’s Walking Stick with its gnarled trunk and corkscrew branches. Nancy points out the best views from the choicest spots. She tells me where I am in relationship to every other path we’ve walked. Though she grew up in West Virginia, her sense of place here is indigenous.

Ed, too, has a love of the land and a sense of his place in it, garnered through summers spent in Montana, working on a ranch to renew his health after childhood illness. He eventually purchased a ranch there and became one of the first landowners to set up a conservation easement to protect these great spaces from inappropriate development. He also feels protective of the natural and wild beauty that surrounds his home and wants to share it with others.

“You’re blessed to have it,” Ed says. “You’re blessed that you’ve got the body and will to take care of it, and when you’re done you see the wonderful results of it. And you don’t have to remember your tennis game, or how many times you’ve hit [the ball] into the net,” he jokes.

The Rosenthals’ garden is a study in the blend of human creativity, ingenuity, and nature’s fertile imagination—formal beds, well-structured hardscapes and fun sculptures extend and diversify the sensory experiences found in the acres of woods, creek, wildflowers and native plants. Each season, each week really, yields its particular delights. This early spring afternoon, it’s the spring beauties and the dog-toothed violets that carpet the woods with a snowy glaze, while the magnolias and daffodils bloom in ordered beds near the house with early displays of color. Fresh peony sprouts tinged with green and burgundy are pushing out of the earth in the more formal areas with a promise of the show to come.

The 11-acre spread has turned several heads, not least of which belongs to Diane Botnick, the event coordinator for the Garden Conservancy, a national nonprofit organization that strives to preserve the most exceptional American gardens for the public’s enjoyment and education. A recent nod of approval meant that the private grounds were opened to members of the Conservancy’s Society of Fellows for a one-day tour this May.

The Conservancy looks for important elements before they select a garden for a tour. “There’s a kind of engagement factor that I think is very important, and the Rosenthals certainly have that,” Botnick says. “This is a landscape that they have lovingly and carefully created and expanded over the years, and it’s very apparent when you see the care and vision that they have. They’ve created a garden that doesn’t exist anywhere else. It’s totally theirs.”

Often, many of the gardens the Conservancy visits involve the work of a landscape architect. Styles vary from wild and natural to very formal, but they all share a sense of good design, Botnick says. A few other common elements include some shared traits among the gardens’ caretakers, such as a love of plants.

“…which certainly the Rosenthals have,” Botnick notes. “They are real collectors. And, also, almost a sense of obligation to share. A garden is something that really needs to have people in it. They’ve been quite generous with their garden, and we’re very appreciative of it.”

While the Rosenthals, as Nancy says, “inherited a landscape with good bones,” many of the original plantings of Grant’s grand landscape design were cleared away by a second owner whose interests did not include the hours of devotion needed to maintain a garden. In fact, many of Grant’s plant choices, which included 13 varieties of climbing roses, wisteria and ginkgo biloba from among a total 83 varieties of shrubs, trees and plants, were sold by the second owner to Natorp’s in the ’60s. The rest of the property, including the woods, became overgrown with honeysuckle, which the three sisters, who had an active gardening staff of six, planted to attract and feed birds through the winter months.

Nancy recalls a bit of grass around the house, weeds and invasive honeysuckle vines thick enough to swing on when they moved to the property. “That was our challenge,” she recalls.

“It took about five years to clear the honeysuckle out of the woods,” Ed says, making the swinging motion of a pickaxe and recalling the sweat equity involved. “But the joy of it was that it opened up like a curtain. The honeysuckle had covered wonderful wildflowers. So as the years went by, and still go by, there’s been a proliferation of those wildflowers…. Now we have the joy of a wonderful walk in the woods.”

It’s not just the Rosenthals who experience that joy. In addition to garden tour groups on select occasions, friends and neighbors are often invited to enjoy the space. As a child, local naturalist Jerry Lippert and several other kids were allowed to explore and play in the Rosenthals’ woods. The creek was a huge draw, Lippert says, and the neighborhood clan called it “The Falls” in reference to its many waterfalls. As teens, Lippert and friends would head out before school in the springtime and do some amateur bird-watching. Birdwhistle’s mature woods had become home to a variety of species. Now an adult, Lippert found his calling as a naturalist offering tours to the public on birding and other ecological topics.

“One thing that’s important is that the area was always kind of a refuge/exploring grounds for kids like me,” Lippert says. “It really did help me become a naturalist. The fact that Ed and Nancy had this area preserved—that they didn’t develop it [is special]. It was sacred to us kids.”

Almost 14 years ago, Lippert asked Ed and Nancy for permission to propose to his sweetheart, Pamela, in their woods beneath a towering beech tree. Jerry and the Rosenthals strung lights from the covered bridge that spans a wooded ravine, creating a pathway of lights that culminated in an arch under the canopy of the beech.

“Not only did she say yes, but now their daughter comes through, and she’s super,” Ed says. “A beautiful young lady.”

The bridge has its own story. The carpenter who built the Rosenthals’ gazebo noticed Ed maneuvering a wheelbarrow around the steep ravine to transport the raw materials he needed to build his woodland paths. He asked Ed if he could build a bridge for him—not just any bridge, a covered bridge.

“And I said, only on the condition you give me two balconies in the center for seats,” Ed recalls with a smile. He was interested in bringing future grandchildren to the spot, where the family could sit and drink in the natural beauty surrounding them.

If you want to divide up the property into his and her domains, much of the woods falls into Ed’s area of expertise, while Nancy tends to more of the formal and informal beds around the home’s perimeter. A concave cement birdbath lies to the side of the house, a remnant from the original owners of Birdwhistle. A kitchen garden graces a back door, where herbs and tomatoes are within easy reach for a homemade meal. The swimming pool is hemmed with taxus, hostas, sedum, lilies, poppies, baptisia, monarda, peonies, allium and globe blue spruce to name just a few. Other new and interesting specimens are added to the grounds each year.

“I went through a period, and you kind of see these all over, when we added tree peonies,” Nancy says. “We’ve gone through a period of azaleas, too, and there’s a lovely hillside of Exbury azaleas.”

Later, we walk near the border of Exbury azaleas, which Nancy mentions will soon be covered with large, bright orange blooms. For now, Virginia bluebells are popping up from the earth, a stark contrast to the shrubs’ deciduous branches.

Large metal sculptures also seem to spring up from the grounds. An island of landscaping surrounded by a circular drive is home to a contemporary sculpture, “Roots in Agriculture,” by David Secrest. Other kinetic sculptures are worked into strategic spots; still others add a humorous note, such as the stick-figure couple gracing a park bench by sculptor Larry Morris.

“They’ve created a true strolling garden,” Botnick says. “You really need to walk through it.”

And we do—literally and figuratively as we stroll through the garden and as we reflect on the images bound into the Rosenthals’ 2008 garden snapshot album. Every moment offers a new scene. Peonies and azaleas will give way to irises, lilies and poppies. Spring ephemerals offer a last gasp before being covered by a leafy summer canopy of oak and elm. Conifers, plants and shrubs produce prodigious amounts of seeds and berries, enticing the many bird species to continue to nest at Birdwhistle.

Preserving the spacious woods has been a boon to birds and wildlife in the area, too. “It is an important bird habitat, I would say, for that neighborhood,” Lippert offers. “When you combine it with habitat across the creek, which is also mature, it’s a nice corridor. If you go further upstream and across the creek, Charley Harper did a lot of his wildlife paintings up in there. He was a nationally recognized artist…. It’s neat knowing that [particular area of] woods has inspired a lot of people.”

As we near the end of the half-mile of forest trail painstakingly laid by Ed, Nancy says, “Oh, I wish you could come back. Each week it all changes. Every day it’s a different garden.”