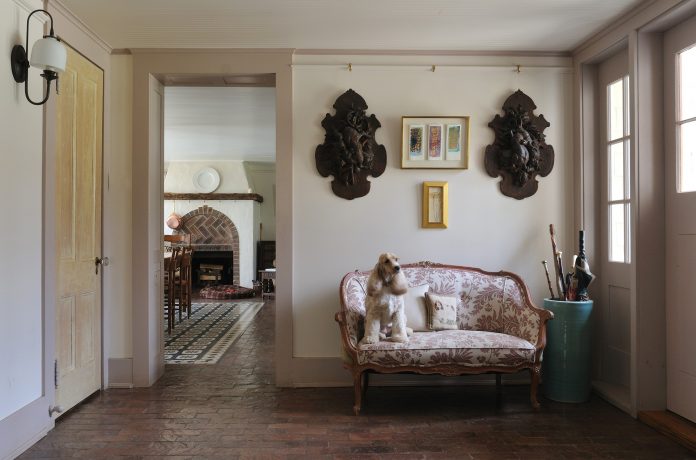 In 2013, the Huffington post named embroidery artist Lisa Borgnes Giramonti one of “Five Female Artists You Might Not Know…Yet,” declaring that “She melds the lost art of needlepoint with a Dorothy Parker-like sensibility.” Giramonti also writes a column in W magazine and maintains a lifestyle and design blog called A Bloomsbury Life, with the goal of living a modern life through an Old World lens. Last fall, she released her design book, Novel Interiors (Potter / Random House, 2014) based on a lecture she delivered at Cincinnati’s own Mercantile Library. Editor Joanne Drilling recently caught up with Borgnes Giramonti via telephone to discuss threadbare rugs, Pippi Longstocking, and classic literature.

JD: How exactly did you end up here at the Mercantile?

LBG: Deborah Ginocchio (a Mercantile Library board member) emailed me saying that she loved my blog and invited me to come and speak as part of the library’s Hearth and Home series. I started thinking about all the books I had read over the course of my life and how they’d shaped the decoration and design of the homes that I’d lived in. When authors write about characters they give you all these clues to their interior lives. I started thinking about this idea in terms of design and decorating. I looked at decorating books that used time periods as a source of inspiration, but no one had ever mined this rich field of classic literature to show people the decorating and design philosophies behind these novels.

At the lecture, I put up photos of the homes I had lived in: In the 1980s in New York City it was Edith Wharton meets Pippi Longstocking—a classic pre-war apartment with tons of colorful Scandinavian furniture. Then I moved to London, and from Charles Dickens I learned that it’s about character and patina—the soul that a piece of furniture has. Now, in LA I look at my worn floorboards and think that I should probably get them redone but I also see the history of 1,000 footsteps during a really great dance party. I was able to really link all that together in the lecture. I thought about it and realized that I can’t be the only one who makes these connections, I’m not the only person who thinks this way. When you read Jane Austen or Wind in the Willows, it’s the details and the warmth in these rooms that we remember, maybe sometimes even more than the plots: The warm fire when it’s raining outside is what makes the memory of that Austen room so enticing.

JD: You write: “We don’t just read a great story, we inhabit it.” What sets Novel Interiors apart from other tomes on decorating? Is it that you advocate discovering design through books? What’s your earliest memory of inhabiting a much-loved book?

LBG: I grew up in Europe and I remember reading Pippi Longstocking in Sweden and just being completely bowled over by the non-conformist way that she lives on her own. Her Dad is a sea captain and he’s always away so she decorates the house on her own and it’s all colorful and crazy. She invites her friends over who have these horrible bourgeois parents and they’re like, “this house is terrible.” Everyone is jumping from tables to chairs to bannisters—no rules! That’s NOT how it was in my house. Ours was very mid-century and you couldn’t really touch anything. I remember thinking, when you grow up you can just do what you want? I think that was the impetus. We moved to England after that and I got into reading all of the Secret Garden, Jane Eyre kinds of books. Houses were cool and cozy refuges.

JD: The attention to detail in your book is tremendous. You provide tips for readers of 19th-century novels on creating the ultimate reading refuge, organizing the perfect kitchen pantry, and why threadbare rugs have so much soul. On the flipside, lovers of Fitzgerald and Maugham often fall for sleek interiors with geometric patterns. For those fans, you delve into the sophisticated power of reflective surfaces and assembling a classic cordial bar for cocktail parties. Each section is also peppered with quotes from novels that align with the theme. Can you talk about your process?

LBG: For some naïve reason I thought that I would have a team of people helping me. The publishers asked me how much time I needed and we eventually agreed upon nine months. And that was that—basically “you call us when you’re done.” I’d read a lot of these books already, but I had to re-read them and pull out every domestic description or detail about a room. I made these huge computer files and I had to group the authors by similarities. For example, Anthony Trollope is kind of like Elizabeth Gaskell, and they’re both like Jane Austen. Once I had grouped like-minded authors together, I pared each decorative style down to its essential components. When I had all of that, I had about half the book done, without pictures. But I knew that I could find these styles in real-life homes because these themes are so classic and timeless.

JD: In the book, you write:

To authors like Isak Dineson, Virginia Woolf, and Dodie Smith, the real purpose of a home is to foster the flourishing of art, ideas, and people. In their fictional bohemian worlds, characters live with a wild sense of poetry, and their personal spaces reflect it: They’re joyful, unorthodox, and fearlessly layered with color, textiles and stories. Yes, these homes may challenge the rules of convention, that’s exactly why they’re so welcoming. Here, personal style isn’t about cash; it’s about attitude, wit, and making do with what you have. If you know of a place that’s always bubbling with conversation, candlelight, and cushions, chances are high that there’s a novel by one of these authors on its bookshelves.

If personal style is about “attitude, wit, and making do with what you have,” what’s your advice for young people setting up their first post-college home? And alternately, for the couple who’ve lived in the same house for 30 years: How can they stay inspired and keep things interesting while also honoring the memories they’ve made in their home?

LBG: It’s a lot easier today than 20 years ago. I would say that the first thing you need to do is to start thinking like a decorator. Notice what you like: Pin photos on Pinterest, rip out photos from magazines. What you’ll start to see are patterns and similarities. You may not realize that you like a dark room, but if you’ve pulled six photos and they all resemble a sanctuary, maybe that’s what you want in your home. Or if you’re picking photos that are all light and bright, that says something different about you. If you don’t have the money to buy new furniture, paint is always the quickest way to transform a room. It’s amazing what the right color can do. Go on the Farrow & Ball website and look at their inspiration and advice on how to choose paint colors. Even if you don’t buy that brand, they have great ideas.

For someone who’s lived somewhere for a long time—rooms can end up becoming storerooms. It no longer is about the character and personality; they just become a repository. The first thing to do is make room for change. Too much stuff is just emotionally overwhelming. Once you create some space it’s great to just move furniture from one room to another. I just moved three rooms of furniture around at 7 a.m. this morning. It’s amazing how much strength a woman has when she wants to move furniture. I moved couches down the stairs. My husband is going to freak out when he comes home. But now they have a whole new life. If you have a lot of clutter, shuffle things out. When everything is crowded together you don’t notice anything.

JD: In a book such as this, the photography goes a long way in helping to communicate the message. Are these interiors from the homes of friends? How involved were you with art direction?

LBG: In LA everyone’s house is dedicated to their own private fantasy so there’s a lot of great homes here. The rest I had to find online or by asking people. Then I hired this insanely awesome photographer, Ivan Terestchenko. I was a fan of his for a long time because he’s able to put so much emotion into a photograph. When you look at one of his you can’t quite figure out why, but you just want to weep. He’s the most incredible guy: He’s French, utterly chic, and when I picked him up at the airport all he had was a duffel bag, a battered tripod, and a Nikon camera without a lens cap. That’s all he needs to create magic. He only works with natural light.

I had pre-scouted all the homes because Ivan was only with me for two weeks. I would go into each house with my shot list and he’d absorb the vibe and get to work—we rarely moved anything, we just photographed the house as it was. My favorite magazine ever is World of Interiors, and Ivan shoots a lot for that. They hire the world’s top photographers and photograph everything from a decrepit Tuscan chateau to a humble house in the south of France, very Mitford-esque, with dogs, kinda messy. That was my inspiration too—under-styled, plenty of dogs in the shots, and if there were little messes we didn’t clean anything up.

JD: And finally, the taxidermy swan chaise paired with the quote from Proust (pg. 241) was a pretty epic book nerd move. Which came first, the actual swan sofa or the quote from Swann’s Way?

LBG: Those two weeks with Ivan were so intense because I would study the night before: What category is this house, what chapter? Then I’d look at all the quotes over and over again. I had like 200 per chapter. If we didn’t get the corresponding shots in that moment, I was out of luck. Which was why, when I walked into this one house it was the craziest bit of serendipity ever. Seriously, this house is two miles from mine and there in the living room is this sofa / chaise made out of a taxidermied swan! It’s the only one in the whole world and is made by Alannah Currie who was in the new wave band, Thompson Twins. She’s now a furniture designer and she makes these crazy taxidermy pieces. This was one of the Queen of England’s swans. Apparently, every swan in England belongs to the Queen and when they die there’s a list of people waiting to make them into taxidermy. And there’s only a 24-hour window after they die in which to collect them and pose them. She got the call, picked it up, and turned it into that crazy, crazy piece of furniture. The first thing I thought was, Proust! Swann’s Way! In that novel, Madame Verdurin announces to her guests that they’ll never see another sofa like hers and I was like, WHAT? This is perfect! Thank God I remembered that quote. That was the most astonishing one, especially considering that the woman who owns the house and sofa hadn’t read the book. She didn’t know. And I said, “Just you wait. I have the most incredible quote to go with your sofa!” That was my Oscar moment for sure.