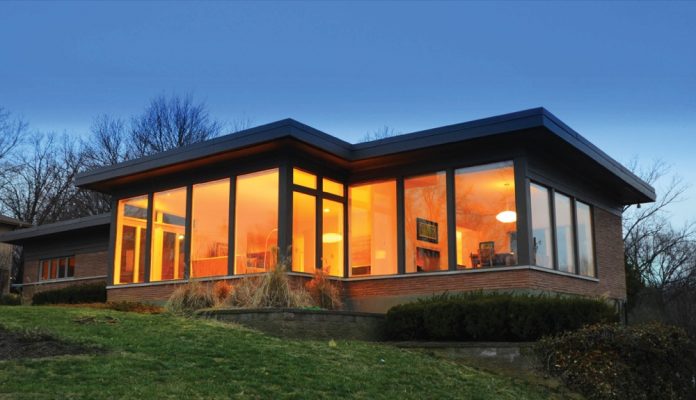 The glass-fronted contemporary designed by Luigi Marioni is in good company on Wyoming’s Compton Ridge Drive: Across the street is a house designed by John Burdick (a founding partner of design firm GBBN) as well as the home Abrom Dombar built for himself. In back are two more Dombars—one each by Abrom and his equally well-known brother Ben.

So who’s Marioni? Though not as well known as those other celebrated local architects, he made his mark on his adopted city. Born in Pontremoli, Italy, in 1903, Marioni arrived in the U.S. in 1909, and in 1929 was among the first students to graduate with an architecture degree from UC. A good deal of his career was spent at Kopf & Kopf Builders in Mt. Lookout (now Kopf Real Estate). While there, he designed many of the stately residences of Watch Hill, as well as the former Losantiville Lanes bowling alley (now Cincinnati Hebrew Day School).

This home, built in 1956, was originally a three-bedroom designed for Dr. Theodore Buka, an ophthalmologist who wanted to use the basement as a clinic. In 2003, the current owners expanded the two-car garage to six and added an office and an all-new master suite. The maple flooring, while not original, complements the expansive windows. “The original blueprints call only for a subfloor, assuming carpet would be installed since that was considered luxurious at the time,” says listing agent Susan Rissover.

Jaye Yorio, Marioni’s daughter who resides in Mt. Washington, fondly recalls the personal touch her father brought to projects. “He would hand color drawings for clients to show them what their house would look like,” she says. His nephew, San Francisco–based artist Tom Marioni, cites his uncle as a big influence: “He showed me pictures of Frank Lloyd Wright’s Falling Water and let me draw with his T-squares.” He also remembers Marioni embracing the cultural icons of his adopted country: “He always drove Pontiacs,” he says. And that’s about as Mid-Century Modern as you can get.