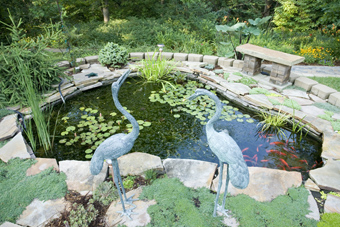 The birdseed tray hanging from the deck at Glenn and Barb Redmer’s home is busier than a fast-food drive-thru at lunchtime. In less than half an hour, woodpeckers and cardinals have stopped by for a snack, with three birds often sharing this small feeding space at once. “This is the time of year when they are molting, and they have some really bad hair days,” Glenn says.He and his wife know the rhythms of the wildlife around their Harrison home, because they’ve gone to great lengths to attract them. With all the flowers, trees and birdbaths, animals don’t have to look far to find food, water or shelter—and that has earned the garden certification as a Backyard Wildlife Habitat from the National Wildlife Federation.

It’s practically Eden for birds, butterflies, raccoons, squirrels and even the school of goldfish swimming around the pond. You’ll find all the beauty of a traditional garden, but the planting beds and water features have been created with wildlife in mind. This means the blooming irises are just as mesmerizing as the hummingbird you catch out of the corner of your eye as he flies in dramatic arcs near the feeder.

From the Ground Up

It took a lot of sweat equity to get this garden where it is today. The Redmers did much of the work themselves, including many weekends spent clearing groundcover from the lot. “You didn’t hear a bird or see a worm in the soil,” Barb says. Except for the whippoorwills, which sang enthusiastically from the trees, there were few other signs of wildlife.

Undeterred by the weeds, rocks and clay, the couple spent the past 12 years building up a landscape that welcomes plants and animals. During the first year living at the house, the lot was simply too rough to garden, so the couple trucked 16 loads of dirt onto the slanted yard. They amended the soil to make it hospitable to plant life, and gradually they started developing the garden—with no master plan in mind.

The path, which is one of the garden’s most defining elements, went in around year three, while other elements, such as the pond, evolved through trial and error. This water feature originally held 100 gallons, but that proved much too small to keep the water quality in balance, so the couple expanded to 1,000 gallons for easier maintenance.

“Glenn said no goldfish,” Barb says. “But someone gave me plants and there were eggs that hatched the next spring.” Now the pond teems with bright orange fish, which don’t seem to mind sharing the space with the frogs. The pond also includes a simple fountain that helps attract birds with its splashing water.

Ten more loads of soil were later trucked in to turn a steep hill on the side of the yard into viable garden space. This time the couple chose SuperSoil, which doesn’t need to be amended. About two years ago, they added a small hosta bed after a visiting garden expert pointed out a good spot for it. Glenn set about building a path around it, but the bird who built a nest in his concrete saw had other plans. The couple simply put up a sign that said “maternity ward” and put construction on hold.

Today you’d never guess that this backyard garden started without a comprehensive design plan, because you’d be too busy examining the surprises in every bed. Wildflowers, herbs, ferns…and it doesn’t take long to run across some of the more obvious wildlife-friendly features. There are three birdbaths, four birdhouses and several feeders, not to mention the natural animal attractors. The landscape is packed with blossoms, especially when the irises—ranging in color from violet to white and peach—bloom in mid-May. The garden also includes daffodils, bluebells, jack-in-the-pulpits, roses, water lilies, coneflowers and more.

Countless groupings of shrubs and tress provide shelter for the animals. Gorgeous gold mops sit next to boxwood, and there’s a walnut tree that’s more popular with wildlife than it is with plants. Walnut roots are toxic to some plants, so Barb subscribes to the trial-and-error method, digging up strugglers and moving them elsewhere.

Barb and Glenn spend two to four hours most days toiling in the garden. These efforts pay off in both natural beauty and the sheer number of birds that visit the landscape. The Redmers have attracted a number of woodpecker varieties, including downy and hairy, along with hummingbirds, chickadees, robins and goldfinches. There are also wrens, sparrows and titmouse flying around the lot. The deck, which wraps around the side and rear of the house, sits up a level from the yard and provides the perfect spot to see the action. Once the Redmers even watched a Cooper’s hawk tussle with a flock of blue jays, but most days the birds simply stop by to eat the few cups of seed Glenn puts in the birdseed tray each morning.

To help attract the woodpeckers in the winter, Barb makes batches of homemade suet and birdseed mix using chopped-up pieces of beef fat she buys from the butcher. She simply fills a cake pan with seeds, melts the beef fat, then pours it over the seed. Once the mixture sets up, she cuts it into squares and places these hunks into a cage-style feeder hanging next to the deck. It draws the birds—and occasionally an unwanted raccoon, which managed to make off with the entire feeder one year. Lately, the neighbor’s beagle basset hound has helped scare off these striped-tail scavengers.

Unfortunately, raccoons haven’t been the Redmers’ only uninvited guests. One night the couple came home to find a room in the walkout basement covered in glass, and Glenn quickly spied a wild turkey hiding under a table. When the bird spotted him, she fled back out the window she’d crashed through on the way into the house. Somehow the turkey had managed to fly through a window and still remain largely unscathed.

But while the turkey story might win the prize for drama, it’s the deer who take the top spot for frustration. As many gardeners can attest, they’ll eat the hostas down to the stems—not leaving a leaf in sight—and the Redmers have found it difficult to locate any plants deer don’t like to eat. Hydrangea, billed as deer resistant, quickly became deer food in the couple’s yard. And after a trip to Italy, Barb was heartbroken to come home and see what they’d done to her daylilies. “The deer had eaten every bud off every daylily,” she says. “They’d never eaten them before.”

They decided it was time to solve the deer problem once and for all or simply give up on gardening. So roughly three years ago the couple put up a fence around the backyard. Since the garden gradually turns back into forest at the edges, you can’t even see the 6-foot wire fence hidden among the trees. But this invisible barrier has kept out the deer. “We’re not kidding ourselves,” Glenn says. “At some point, I’m sure we’ll see a deer in the yard.” For now, the deer are welcome to whatever tasty plants they find in the forest or in the couple’s front yard.

A Work in Progress

Though the Redmer garden looks like it’s ready for a bus full of plant lovers to pull up for a tour, it’s still changing and evolving. Most recently, a spot next to the driveway was cleared to put in a new bed. It features a fountain as a focal point, along with benches and new plants.

As you talk with Barb and Glenn, it’s clear how much knowledge they’ve gained through years of experience. There are wire cages around many of the plants, for instance, to help them grow tall and healthy. “Since we’re on a hill everything wants to go to the sun and fall over,” Barb says. She’s also learned that when a plant says part sun/shade that it’s better to error on the side of shade. But perhaps a simpler piece of wisdom from Barb explains how this whole garden came together: “Plants are like potato chips. You can’t have just one.”

It’s tough to keep your garden from becoming a deer buffet, but the plants you choose can help tip the odds in your favor. The following are known deer-resistant varieties, though as Glenn Redmer points out, “Deer will eat anything if they’re hungry enough.”