if you’ve ever walked down Clay Street in Over-the-Rhine, there’s a good chance you’ve noticed a building displaying a sign that reads Real Reels on one side and Martin’s Movie House on the other. The four-story multi-apartment brick complex at 1322 Clay Street was built in 1880. Inside, you’ll find Martin Walker, who, with his signature pipe in hand, will tell you that he spent the past five years restoring the building’s original features, including its doors, shutters, beech wood cabinetry, and pine floors. The property, which butts up to Iris Book Café’s open air back patio, was abandoned when Walker bought it, but it was filled with pieces of history, he says: “As the previous owner got older, she saved everything—diaries, letters, report cards from the 1910s, notes from World War I.”

A Bloomington, Indiana native, Walker resettled in Over-the-Rhine in 1996 and has worked in prototype purchasing at Toyota for 22 years and counting. He says his experience working on home projects for his father prepared him for his restoration project. Step inside the finished project and expect to be instantly transported to another time. The ground floor, which Walker and his wife occupy, includes standout features like 1940s antiques and furniture; a safe filled with historical documents, such as a cancelled share certificate from 1899; and Walker’s 16-seat movie theater, which he constructed in the his living room. Upon request, Walker will graciously project one of his many 16mm film reels on two paintings of the Greek muses of comedy and tragedy, Thalia and Melpomene. When we visited, he showed the 1955 science fiction film Forbidden Planet.

The building contains three studio apartment units, one on each upper level, which tenants can access through a separate external door. A winding wood staircase coated in mahogany paint leads to the bright, spacious studio apartments, each featuring a decorative fireplace with original mantles and fully renovated bathrooms. The fourth floor, which is the only unit currently occupied, also contains original plasterwork that shows German laborer trowel marks from 1880. Modern touches throughout each unit include central air and heat, haiku ceiling fans, quartz counters, and brand new high-efficiency furnaces, washers, and dryers. Our favorite features of the complex are the copper bathtub and sink, the solar panels on the roof, and of course, Martin’s Movie House, with exposed brick, red curtains, and matching folding movie theater seats.

So what’s in store for Martin Walker next? “I’d like to rest a little bit, since I haven’t had a vacation in five years,” says Walker, who dedicated all his free time to restoring the apartment complex. “But there are some other buildings I’ve been looking at.” Our fingers are crossed he’ll start his next restoration project soon. 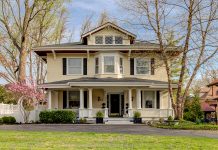 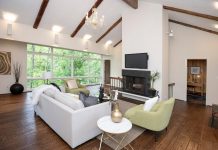 This $1.2 Million Hyde Park Home Has the Backyard of Our Dreams