What better way to spend a Friday night than listening to live music, vinyl records, and sampling craft brews? This week, you can do just that at 3 Points Urban Brewery in Pendleton as part of local independent label Soul Step Records’ free-to-attend Cincinnati Brewers Series.

The fifth installment of the series celebrates the release of Cincinnati-based artist Knotts’s new 45-rpm single “Until You/These Days.” The event continues Soul Step’s efforts to raise funds to release new music at no cost to its artists. During the event, Knotts will perform live, and to commemorate the occasion, 3 Points will tap a one-off beer in a souvenir Soul Step pint glass.

“I think the local music and local beer crowds go together so well, and it’s a very fulfilling feeling to see everyone come together to celebrate Cincy music, beer, and vinyl,” says Melvin Dillon, owner of Soul Step Records.

Hosting in a space where the community can come together for common creative interests is the most important aspect of the 3 Points taproom, says Aaron Westendorf, the brewery’s marketing manager. “The artistry behind making a physical product like a vinyl record, combined with Knotts’s entertainment and our beer makes for a perfect night at 3 Points Urban Brewery,” he adds.

Creating the citywide music-and-brewery series, Dillon was inspired by his own experiences in Cincinnati. “I remember being in the breweries in their early years, meeting people, and falling in love with the city,” he says.

Knotts was recently named Best New Artist at the 2018 Cincinnati Entertainment Awards and has performed on stages all over the city, including at Fountain Square. Copies of Knotts’s new album (including a limited-edition Barbie Dream Car Pink vinyl) will be available for purchase at the event.

The party begins at 8 p.m., and Knotts will take the stage at 9 p.m. For more information, visit the event’s Facebook page. 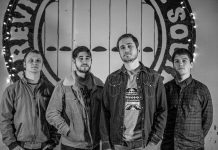