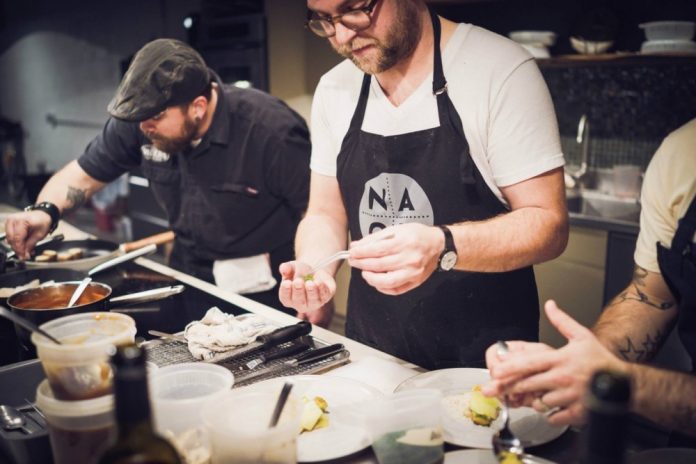 In 2011, Ryan Santos began Please, an adventure in pop-up dining that would become an overnight sensation in cool-kid culinary circles. Inspired by his desire to keep cooking while battling Crohn’s disease, Santos has been setting up shop at outdoor tables, brick-and-mortar restaurants, and even a farmhouse. If you haven’t had the chance to enjoy one these famously tasty nomadic events, you’re in luck: Thanks to a wildly successful Kickstarter campaign, Santos is putting down roots.

With plans for his new restaurant in motion, Santos realized that his dream was going to need some financial help. Enter the Kickstarter campaign aimed at raising $35,000. “I was trepidatious about doing one, but had some chef mentors of mine push me to do it. Given our loyal fan base, and just how supportive the community in Cincinnati is, it doesn’t surprise me that they’d band together to make this happen.”

Support came pouring in right from the start, ending with a whopping $38,015. Near the end of the campaign’s time frame, there was still around $4,000 left to raise. “We closed the gap [in an] afternoon,” says Santos. “It was an emotional and touching day.” Investors had some exciting incentives: Santos offered everything from private dinner parties to trips the woods to scavenge for wild edibles to Please’s famous bourbon and duck fat caramels.

The crew plans to use the Kickstarter funds for general needs like equipment for their new kitchen. As for the new restaurant, Santos hasn’t settled on a location, but does have plans to keep it simple, allowing his food to speak for itself. His own experiences living gluten-free will continue to inspire him as he creates options for all diets. “We’re playing around with a lot of alternative grains right now to be able to provide some really awesome and unique gluten free items that I think our guests will dig,” says Santos.