Before Kristin and Avram Steuber opened The Gruff on January 14, Covington was in dire need of a gourmet grocer, deli, and brick oven pizza joint. The Gruff is a crossbreed of all three. The Steubers formerly operated Twin Bistro, a restaurant and catering company once located inside Covington’s Panorama senior citizens apartments, but they closed the restaurant in May to focus on their new endeavor. Covington’s answer to Hyde Park’s Dutch’s—except with pizza and draft beer—The Gruff features deli items such as mortadella, salads, locally-made Piebird pies, and duck prosciutto. “We decided to kind of take a twist on the old deli stuff and make it a little more creative and more upscale,” Kristin says. The expansive storefront, with a forest green floor signifying “greener pastures” harbors the deli, a small market selling everything from a bottle of coriander to wine to quinoa snacks. 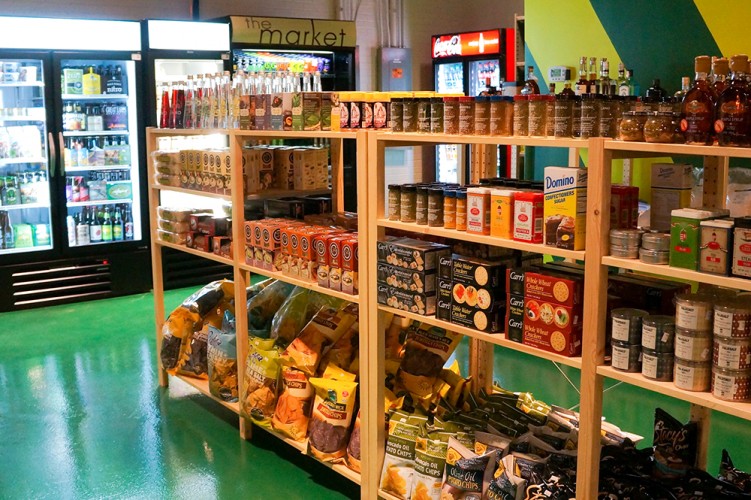 And the nexus of the place, the bar and dining area, is where BLDG’s colorful billy goats from the fairytale the Three Billy Goats Gruff (hence the eatery’s namesake) are painted on the walls. While dining in, customers can sip on a Mad Tree draft, watch TV, and feast on a fried bologna sandwich and pickle fries. (Thankfully, goat isn’t on the menu.) The food (along with six-packs) is also available for carryout or pick-up through their drive-thru.

The Steubers hope Ohioans will cross The Roebling to visit them, but they mainly devised The Gruff to serve The Cov’s resurging community. “I think it’s great if they [Cincinnatians] come over here, but we need something here, too, for the people who live here.”