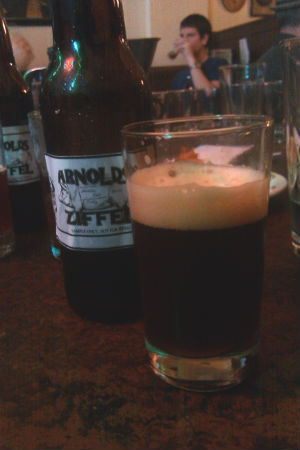 A few weeks ago, I went to a beer-loving blogger type gathering at Arnold’s to help  Dan Listermann narrow down his options for the beer he brewed for Arnold’s Harry’s Law premiere party last night.
Unfortunately, I both a) missed the party last night and b) forgot to post about the tasting after it happened (I mistakenly saved the post as a draft instead).
Hoperatives, as always, had great coverage of the tasting. But because Arnold’s was nice enough to invite me to their initial tasting, I’ll post a couple thoughts here.
The beer Dan brought us was a smoked altbier. Smoked beer is a really old way of making beer. We’re talking centuries ago. Before kilns, malts were dried over an open flame, which led to the smoky flavor. A friend of mine described that flavor as being “like drinking ham.”  If you’re into ham and sausage, you’re probably really going to like this beer. If you’re not, the Arnold’s Ziffel (named for the Green Acres pig)  Dan brewed is still probably the best introduction you can get. It was a rounder, smoother version than say the Fort Collins Z smoked amber. The smoked flavor was definitely present, but it didn’t taste like liquid sausage.
We tried four variations of his beer*. But within a few minutes, everyone agreed that “#5” had the right balance of flavors. It had the smoky flavor while stil standing on nits own. As the night went on, and I kept drinking all four of the  samples, #5 was clearly the beer that warmed the best. I kept checking for bottles of it on the group table to pour more in my glass and after an hour, all the #5 was gone. A pretty good sign that Dan got something right.
*For all the homebrewers: Two of the beers used half smoked malts and half crystal malts, the other two used 100% smoked malts. Each of the beers used a different yeast for fermenting.