Home News Architecture Rehabbing MainStrasse, One Property At a Time

In 2002, when Emily Wolff and Paul Weckman bought their first building—now Otto’s in Covington—they were at a crossroads. About to graduate from the University of Kentucky and expecting twins, Wolff and Weckman had a choice: relocate to Florida with Weckman’s employer or go all in on a rehab project with a storefront for business income and a home above it.

Wolff argued for the latter. “Paul had worked in kitchens and had a passion for it, and my family is in Ft. Mitchell,” she says. “For us it was convenience.” The couple did most of the renovations themselves and put a modern spin on a turn-of-the-century business model.

Two restaurants (the couple also owns Frida 602 down the street), more than 10 residential projects, and five kids later, Wolff and Weckman are still all-in on Covington.

But what started with a convenience project has blossomed into a mission to steer Covington’s MainStrasse toward stabilization. Before they take on a project, it has to tick a lot of boxes. “Is it going to provide a business base, create jobs, and take MainStrasse to the next level?” says Wolff.

Rehabbing in a historic district like MainStrasse adds extra layers of scrutiny; something as simple as choosing an exterior paint color can mean compromising design desires with guidelines from local and state historic boards. “It’s the art of meeting in the middle,” says Wolff. For example: Frida’s front door had to remain true to its historical era but also comply with Americans with Disabilities Act guidelines.

Now the couple has zeroed in on Ninth Street, which Wolff describes as a thoroughfare for heroin traffic, and are about to unveil two mixed-use properties there, including one at Ninth and Pike. “We were seeing heroin deals on the way to school at 7:30 in the morning,” she says, “and [decided] we need to start buying these vacant and slum properties on Ninth. It fits nicely into our model of preservation and neighborhood stabilization.” 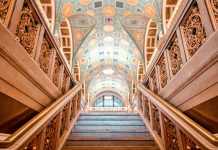