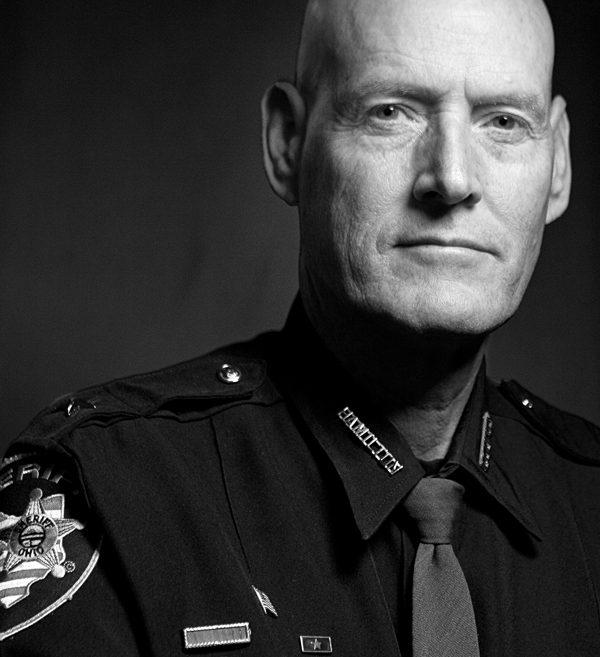 For all the money, energy, and the precious bodily fluids the previous resident of the Hamilton County Sheriff’s Office expended to stay there, and for all the ways he shaped the department in his image, you would think the man who engineered the upset win in November would quickly have given the place a makeover. Some new plaques. A wild boar head. Espresso machine. Something indicating it’s a new day.

Not yet. Well, there’s a potted plant sent by his sister, but the scuffed yellow walls are barren. “We’ve got to paint first,” Jim Neil says with a shrug.

Maybe it’s just a coat of paint the room needs. Or maybe it’s a picture—a portrait of the guy now sitting behind the desk. Sure, Neil defeated Sean Donovan, handpicked by Simon Leis to carry on his work as sheriff of Hamilton County. But Neil is a cautious, low-key fellow, who has yet to communicate to the county exactly who he is. It’s far from clear how much voters were opting for the new guy, and how much they were turning against Leis.

“I was a career deputy sheriff, so I’m known by the men and women I worked with in the criminal justice system. But outside of that system, the people of Hamilton County don’t know me,” Neil acknowledges. “It’s incumbent on me to make myself known.”

It won’t be easy. He’s coming on the heels of a Sheriff who symbolized law enforcement, morality, power, and numerous other cumbersome abstractions over the past 25 years. The Democrat Neil stands in opposition to much that Leis, a Republican, represented. An ex-Marine, Leis liked to go commando with his armored personnel carriers, helicopters, patrol boats, and general military style; Neil has vowed to get rid of the armored vehicle. Leis had his own private economy, spending impounded cash on the department and allowing favored employees to retire, collect their pension, and then hiring them back on salary; Neil is auditing the department and has criticized such double-dipping. Leis was intimidating; Neil looks like he could use a good meal.

But change is afoot. “I’m very transparent,” Neil says. “I vowed to open up this office to the media.” The first audit of the Sheriff’s Office—interestingly, scrutinizing the lame duck period between the election and Neil’s swearing in—should be completed soon. Since our initial interview, Neil has painted the walls brown, and Velcroed a faux-animal hide to a spot by the door. “I’m thinking about some type of love seat for the room,” he adds.

“Love seat” and “Si Leis” were never said in the same sentence. The old guy is a tough act to follow. And when Neil defeated his designated successor last November, Leis made it all the harder, telling the incoming team to stay the hell out of the office until he was good and ready to depart—the minute before Neil was sworn in early in January. “You’ve got to understand, after 25 years, Mr. Leis created a campaign war chest that was very admired,” says Neil. “He donated a lot of his own money to Sean Donovan’s election. So me winning was a bitter pill for him to swallow. He took it hard.

“But I can’t understand the lack of any transition—that don’t make any sense,” he adds. “At some point you have to look at what’s best for the people of Hamilton County. There should have been some kind of transition here and there wasn’t. But we started Day 1 with boots on the ground, running.”

For his part, Si Leis does not want to talk about the past, or the new guy, or the election. There is but one thing Leis will speak to me about: The Pipe & Drum Corps of the Hamilton County Sheriff’s Department. “We started the bagpipe corps and I suggested every one of the officers,” he growls. “It’s the best P.R. the department has ever had.”

There have been a lot of symbols of Leis’s era: the synchronized motorcycle team, the balloon depicting Leis that was brought out for parades, your favorite Robert Mapplethorpe photo. But the Pipe & Drum Corps was probably closest to the sheriff’s heart. It appeared at law enforcement funerals, Opening Days, and at countless other civic events. Leis personally authorized every appearance, and was so closely identified with the crew that the media often simply called it “Sheriff Leis’s Pipe & Drum Corps.” Dressed in Hamilton tartan, slow marching to “Going Home” and “Scotland the Brave,” they put a public face on the private rites of law enforcement. Drug forfeiture money and donations fund the band, which is composed largely of volunteers from department ranks. “I assume as long as the man in charge of the Corps, Steve Watt, maintains operational control, it will do well,” commends Leis.

According to Watt, it was good to be on Leis’s good side. “We are the fair-haired boys, it is said around the department,” he jokes. “[Leis] loves the bagpipes. We were always treated well here, as is known.”

But even the kilted carriers of the pipes have been touched by the politics that colored the department. Watt isn’t just commander of the Corps and a sergeant in the department; he is the president of a Fraternal Order of Police Lodge that endorsed Neil. After the endorsement, Neil tells me, Watt felt the heat and resigned from the union. Watt, however, claims that he took a leave of absence for personal reasons; in any case, Neil says the FOP declined to accept the resignation. Watt remains in both the Sheriff’s Department and the Corps today.

Leis barks a note of concern for the Corps’ future. “People know what my legacy is, I’m not gonna say what it is anymore. If he wants to dismantle it, well then that’s up to him,” he says, as if unable to utter Neil’s name.

Not to worry: Neil has pledged to keep the Corps going, and wants to open its ranks to members of law enforcement beyond the Sheriff’s department. Their first invitation in the new year—the first following Neil’s victory—came from the Republican Club’s Annual Pancake Breakfast. Neil didn’t bat an eye when the request came in.

“A few of our guys were worried, but that is all behind us,” says Watt. Perhaps it is.

Have Gun, Will Travel

Neil on gun control: “I am a supporter of the second amendment, and my goal is to issue more permits than any other sheriff in the state.” Sensing he may be on the verge of making news, Neil fishes out a black notebook and reads a carefully-worded statement that it’s not his job to interpret the U.S. Constitution but to follow it.

The Pipes Are Calling

Meanwhile, the Pipe & Drum Corps is celebrating its 20th anniversary. They’ll be appearing at the Reds home opener April 1.