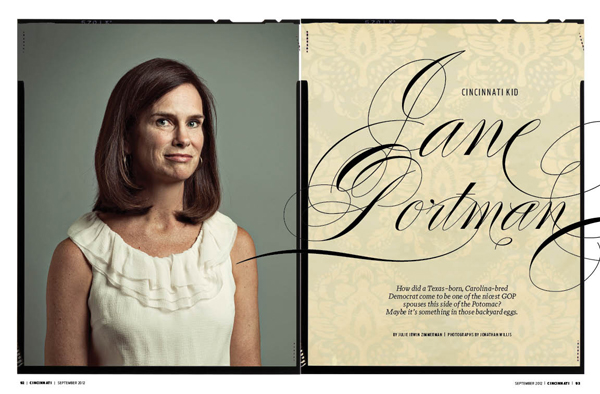 Jane Portman, wife of U.S. Senator Rob Portman, is the mother of three almost-grown children, a volunteer tutor and driver for Meals On Wheels, as well as a former MBA student, communications professional, and White House intern. Her admirers say she is also proof that her famously disciplined husband can’t possibly be boring. On a late July day I met Portman, who is 52, at her house along the Little Miami River in Terrace Park. Her whole family was home—her husband and younger son Will had just returned from a training ride for an upcoming bike race, and her older son Jed and daughter Sally wandered in and out. In an age when political wives are a subject of avid curiosity in pop culture circles—as television series like The Good Wife and Political Animals and Curtis Sittenfeld’s novel American Wife show—Jane Portman projects a decidedly more down-to-earth profile. With son Will standing in as her handler (that’s a joke, though he did sit in on the interview), she talked about the ideal chicken coop, her so-so first date with her husband, life inside the Beltway versus Cincinnati, and what the future holds for her. What new adventures may lie ahead for her husband, who reportedly has been vetted by the Romney campaign in its search for a vice-presidential running mate, had yet to be determined at press time.

Did you grow up in Cincinnati? I was born in Wichita Falls, Texas, but I really grew up in Winston-Salem, North Carolina. I went to Vanderbilt. I was a White House intern before it had any connotation. [Laughs] I interned there one summer for Jimmy Carter.

So how did you meet Rob? On a blind date here in Cincinnati. My aunt and uncle lived in Cincinnati for a number of years and were friends with Rob’s parents. My aunt and I had gone on a really cool hiking trip in the Himalayas and when I came to visit her here after that she said, “I have this friend whose son is planning a kayaking trip in China, maybe the two of you should go out to dinner and talk about it.” It was an OK first date, it was fine. He talked a lot and I didn’t really have a chance to say too much, but we stayed in touch; we wrote letters and exchanged a couple of books—sort of adventure stories—and connected a few months later to go on a rafting trip. We both ended up moving to Washington and dating there.

And you were working for [former U.S. Senator from South Dakota] Tom Daschle during that stint? Yes, from early 1985 through early 1986. I was a legislative correspondent, the low person on the legislative totem pole.

You must have had a longstanding interest in politics. I did. In seventh grade I worked for a family friend who was running for the state house in North Carolina. I majored in political science at Vanderbilt, and knew that I wanted to work on the Hill. I had worked in a Senate campaign in 1984 for a man named Jim Hunt who was governor of North Carolina. I had hoped to go to Washington working for him, but he didn’t win, so I started knocking on doors and ended up working for Tom Daschle. It was very exciting, very interesting. The issues I handled were new to me, and sort of South Dakota–focused—hunger and Native American issues. I learned a lot about the issues and more about politics and policy and the joy of being in Washington. I saw it as a place where a lot of good people go to try and make a difference.

Was Rob living there then? Rob was working for a law firm in Washington, D.C., at the time. We got married in July 1986 and moved back here to Cincinnati.

I understand you two had an agreement: that you’d become a Republican if he’d become a Methodist. Our consolidation agreement. [Laughs] It’s sort of a funny thing looking back. It was not a big deal. Growing up in North Carolina, everybody was a Democrat, and I was always on the conservative end of that spectrum. And for both Rob and me it was important to have a shared faith. I also said I would take his last name, but all our kids get my maiden name as a middle name. That’s what it was really all about—finding common ground.

Have you lived in Washington since you were married? We lived there when Rob was working in the White House in the legislative affairs office for the first President Bush. And I was at George Washington University working on my MBA, which I did not finish. About the time I started the program we started having children and it just became too complicated.

Did you move back here after the first President Bush’s term? We actually moved back before his term was up. Rob’s mom became ill and we wanted to come back and be with her, and we’ve been here ever since. We really wanted to raise our kids here. I started to put down roots; Rob obviously already had that. It used to be when people were elected to Congress, spouses weren’t working as often, transportation wasn’t as easy, and people used to assume they’d be able to make a career out of elected office. And all those things have changed. I think far more families stay in their home districts now. It’s a pretty easy commute for Rob; it’s one hour. If you live in Hawaii or Alaska it might be a different story, but for us it has worked out well. Our lives have not been that different from a lot of families where one spouse travels for work.

Your kids are almost grown, right? Almost. Jed is our oldest, he’s 22 and just graduated from college, Will is almost 21 and a junior in college, and Sally will be a high-school senior. She’s 17.

Do you have empty-nest plans—career goals you want to achieve or volunteer work? I’m already very involved with a couple of volunteer activities in Cincinnati. The primary one for me is Cincinnati Children’s Hospital Medical Center, where I’ve been on the board for seven years. Don’t get me started because I’ll brag, but it’s a really fabulous institution. U.S. News & World Report just ranked it in the top three pediatric hospitals in the country. I tutor some children in Cincinnati Public Schools, and for the last three years I’ve been working with two Vietnamese students at the Academy of World Languages. And I drive a Meals On Wheels route, which I’ve done for about 12 years. When the kids were younger I was a lot more involved with their schools. I’m not rushing the empty-nest thing. I don’t have specific career or volunteer plans, but I’m open to the possibilities. I’ve got the chickens and the dogs.

I’ve heard that you got the chickens as a Christmas gift. My children are afraid I’m going to become a crazy chicken lady. But I’ve always liked chickens.

Are they harder than you thought they’d be? No, they’re actually easier than I thought. Rob and I found this wonderful little coop called a chicken tractor, and it actually makes keeping chickens pretty easy. So that’s what I asked for, for Christmas. When it came Rob and I assembled it and [then] we got our chickens—four girls and they produce an egg apiece a day.

Would you consider returning to full-time work? I don’t know how that would translate to our current lives, but yes, I would absolutely consider that if the right opportunity came along. My background, aside from working for Tom Daschle, was as director of communications for the Greater Cincinnati Foundation. I worked there for probably four years total and I worked part-time at Eureka! Ranch—the company started by a former Procter & Gamble guy named Doug Hall. It was about product invention and marketing; I was a “trained brain” part-time there for about a dozen years. So I’ve kept my hand in a few different things.

With the kids grown do you entertain thoughts of moving to Washington? We really love being here. We love being on the river and we love our neighborhood. So I don’t know the answer to that. We’ll see.

Do you know many other political spouses? I have gotten to know a few. Rick Lazio is a former House member from New York and he and his wife Pat are some of our closest friends. Over the years I’ve gotten to be friendly with a number of folks. John Hoeven is a senator from North Dakota, and his wife Mikey is just terrific. She’s a great friend and role model; she had some initiatives she was involved in in women’s health that she’s continued as a Senate spouse. It really runs the gamut, the involvement of spouses. Some want an arm’s length-distance from the work their [spouse] is doing. I really enjoy it. I enjoy the campaign; I’ve enjoyed getting out and going different places. As a family, we’ve done parades and gone to county fairs. I’ve also done some speaking on my own to different groups. I like being able to participate, to disengage when I want and to plug in when it works.

How interested are you in the policy issues your husband deals with every day? There are issues I feel personally very interested in, like children’s health and education. I don’t advise Rob strictly on those issues, but certainly we share our experiences and I tell him what I’m seeing. We bounce those things off each other.

What about the adoring gaze that political spouses seem to master? I’m not sure I’ve perfected that. I’m still working on the adoring gaze. I do love him, I do adore him, but I don’t know about that gaze.

Photograph by Jonathan Willis
Originally published in the September 2012 issue.