Home News History Bob Woodiwiss: The Man Who Spewed Too Much

Protecting sources. Protecting victims. Comments made off-the-record or on background. Rumors unconfirmed by deadline. Information extraneous to the assigned story. Space constraints. Vodka-related ineptitude. Scotch-blurred notes on a bar napkin. Brain farts. Brain fever. Brain Chlamydia. These are just a few of the reasons a journalist might leave things—incriminating, astonishing, juicy, ha-ha-what-an-idiot things—out of a story.

In the 50 years I’ve been writing and reporting for this magazine, I’ve withheld and/or failed to include such nuggets many times. Now, however, the time for discretion, concealment, respect for others’ privacy, and personal integrity is past. Why? Because the 50th anniversary of anything is a triumphant milestone event, a freewheeling fête majeure that behooves celebrants to drop their pants and let the cajones fall where they may. Probably.

And so, read on, readers, for the story behind (or loosely attached to, or imprecisely associated with, or in no way related to) the story. 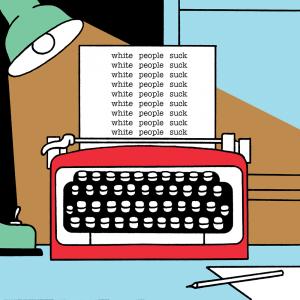 The year: 1967. I was a green tween with a couple of hard-hitting middle school newspaper features under my belt (“Wood Shop Confidential: Where the Thumbs Are Buried”; “The Sick, Twisted World of Teachers Who Assign Homework”). Cincinnati Magazine had hired me through a loophole in the child labor laws; my parents, who’d pegged me as a deadbeat since my gestation period (or “40-week vacation,” as Dad called it), were only too happy to go along.

It was right after the city’s summer race riot and my first assignment was writing a child’s-eye view of its underlying macrotheologic and sociopancreatic causes. In the course of researching my story, I came across a fact so explosive, so heretical, so mind-blowingly objectionable, I knew no Cincinnatian could accept it and that readers’ disbelief would undermine the credibility of the entire piece. Thus, wrongly, I left it out. Today, though I stand by my original assessment and anticipate a similar degree of denial and blowback, it’s time to lay out the hard truth, come what may: 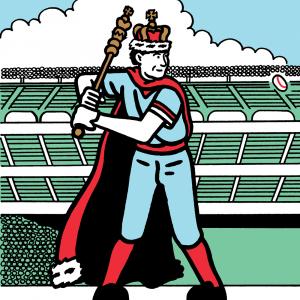 By 1973 I was in college, majoring in Actuarial Science with an emphasis on Foretelling My Own Death. Though I had no plans for a career in journalism, I continued to do regular freelance features for the magazine to earn a little jingling money (I wouldn’t make folding money until 1996).

That summer, I did a profile of Paolo Martinelli, the Cincinnati Reds team barber, who, together with engineers at GE Aviation in Evendale, was quietly developing a more aerodynamic hair cut for Pete Rose. While researching the piece, I got to spend some time in the Riverfront Stadium locker room, where, before long, the Big Red Machine was affectionately referring to me as “punk-ass bitch.” 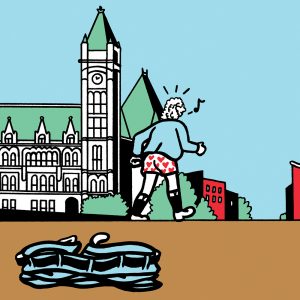 One of the juiciest plums of my career came soon after I’d graduated and, having failed to die at 21.75 years old as my studies had forecast, started working full-time at the magazine. I was doing a story about the mystic, mystifying Shroud of Turpin, a garment many believed proved Jesus once made a lowball offer on a split-level house in the Eastern suburbs.

Following a lead, I traveled to City Hall. By sheer coincidence, I arrived there shortly after Councilman Jerry Springer had resigned in the wake of his prostitution scandal. I’d met the charismatic politician once before, at a sex addiction clinic (he was trying to stop, I was trying to start) about a year before. Spotting him as he exited the building, I said hello and asked, “So, what’s next?”

He fell quiet. His eyes lost focus. After a few seconds, he started to speak in a detached, faraway tone. “I dream of a day when I’ll command a vast army of oversexed troglodytes and the congenitally cruel. When I shall release upon the earth a plague of mutated, chromosomal dregs: skinhead amputees, morbidly obese serial adulterers, anorexic cannibals, homophobic hermaphrodites, happy sadists, sad masochists, bipolar sadomasochists…”

He trailed off. I admired the specificity of his vision but knew it would take the cynicism of a television executive to extract the profit from it.

Then—bang!—the twinkle returned to Jerry’s eyes and he said with a smile, “But for right now, I’m done with pants.” Whereupon, he unzipped his trousers, stepped out of them, and walked off. It’s my understanding he anchored the news in his underpants for his entire run on WLWT Channel 5. Only when he began roving among the (syndicated) oversexed troglodytes and congenitally cruel did he rejoin the ranks of the pantsed. For obvious reasons. 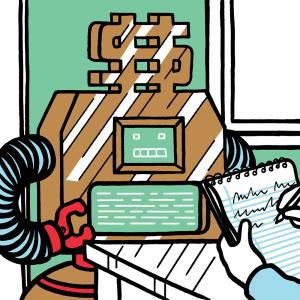 In the wake of the Home State Savings debacle of 1985, my feature “Planet of the Oops” contained an exclusive tell-all interview with CEO Marvin Warner’s personal manservant, a crude but advanced-for-the-time robot know as MammonXL. The unit’s primary duties were polishing the household’s solid gold furniture and feeding Warner’s full dormitory of Solid Gold Dancers.

MammonXL, because he was privy to his master’s private conversations as well as being regularly updated via connection to the company mainframe, was quite well informed. Though our interview was, by necessity, conducted entirely in MS-DOS, I found the robot’s responses both enthusiastic and loquacious—traits I later learned were attributable to an extended power surge. It was MammonXL’s memory (partly damaged by that same power surge) that the S&L’s failure was triggered shortly after Warner replaced Home State’s longtime CFO/CPA with Max Reitoff, an ACPA or Ancient Civilization Public Accountant. While intended as a cost saving move (Reitoff was paid in beads and animal pelts), what Warner failed to realize is that the earliest math systems had no concept of zero. This proved problematic when Reitoff entered figures like $1,500,000 as $1,5,. Naturally, ruin followed.

Unable to confirm MammonXL’s information until the day after my deadline, I couldn’t include those remarks in the published version of the interview. Stupid ethics. 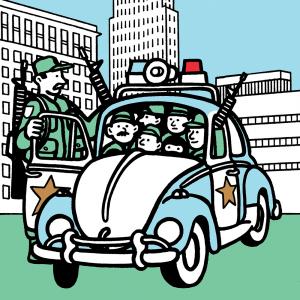 The Contemporary Arts Center’s “Mapplethorpe trial” put Cincinnati in the national spotlight. The big papers and magazines focused on issues like First Amendment rights and the emergence of the orifice arts. Me? I took a different, niche-ier approach: Robert Mapplethorpe’s transgressive images include several images of leather bar patrons. But what about Cincinnati’s late-night leather chili parlors, where couples can grab a bite after the bars have closed?

It was while doing the legwork on this, visiting not just hardcore establishments but less assertive Ultrasuede, Naugahyde, and pleather parlours, that I began hearing rumors. Rumors that Sheriff Simon Leis, emboldened by his CAC bust, was planning another, more audacious move: raiding Riverfront Coliseum during the Ringling Bros. and Barnum & Bailey Circus’s run and arresting all the hot dog vendors for underage wienering, i.e., selling phallicly suggestive meat products to minors. A few days later, when I approached the sheriff for comment, he arrested and jailed me for approaching an elected official with intent to elicit honesty. In my cell, seeing how I looked in an ill-fitting orange jumpsuit, I offered to drop my investigation for my freedom. A deal was struck.

And not such a bad deal, as it turned out. Because, in the end, the bust never materialized. The reason for that, I eventually learned, was yet another bit of Leisian quid pro quo: Raid plans were dropped in exchange for the big top’s clowns showing the sheriff how to fit a 13-man SWAT team into a single VW bug. 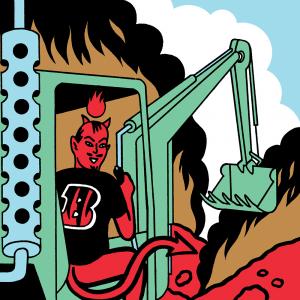 The Banks. Geez. What a megillah. The blue-skying on this project started way back in the ’90s. The stadia bookending the development didn’t open until 2000 and 2003. After that, various chunks and phases were proposed and built—the Freedom Center, restaurants, apartments, condos, offices, a park, a carousel, Tomb of the Unknown Luken—with the last one scheduled for completion in the summer of 3067, barring any unforeseen delays. Prowling and poking around both the edges and bowels of this polymorphous project has, not surprisingly, yielded several features over the decades, including my offensive and controversial review of the Reds’ new home, “GABP is G-A-Y, ’K?”

A few years before that piece, during the construction of Paul Brown Stadium in 1998, I was putting together a profile of Bengals owner Mike Brown’s attorney/top advisor Lucifer X. Satan, Esq. One crisp fall afternoon, as Satan and I were walking around the busy excavation site, him filling me in on how he got the 1996 ballot issue passed and convinced the city to sign the one-sided agreement, work suddenly came to a halt. Seemed a backhoe operator had unearthed archeological evidence of Cincinnati’s original settlement, circa 5300 B.C. Among the artifacts was a pictograph showing the nascent village split into east and west halves: Morning Fireball in Sky Side and Evening Fireball in Sky Side; there was also evidence of animal sacrifices to their chief, Ugwum Taft.

“Damn,” I said. “An archeological find like this will stop construction indefinitely. Maybe even scuttle the whole thing.”

“Don’t bet your soul on that,” Satan replied. 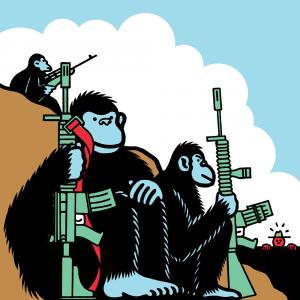 Last year, I was asked to write a short, 400-word profile of Cincinnati Zoo Director Thane Maynard’s cap (his khakis were too busy and demurred). After quickly pounding it out, I decided to tag along with the photographer assigned to take pictures for the piece—you know, “cap on head,” “cap on rack,” “cap with its kids,” typical celebrity hat stuff.

It was only after arriving that we learned a crisis was unfolding: the Harambe situation. Using my press credentials, I made it into the Zoo’s command center. (My self-laminated, self-assigned press card is an excellent jimmy.) There, officials were considering a sharpshooter but were reluctant to commit. One reason: They feared a potential gun battle with Harambe’s lowland mates, who’d amassed their own cache of weapons via mail order and a keeper’s stolen credit card, and which, thanks to the NRA and Republican lawmakers, any primate more highly evolved than a black-crested gibbon is legally permitted to own.

Finally, I feel obliged to acknowledge the story behind this present story of stories behind past stories. I died before completing this piece. So, let me just say thank you to my writing “accomplice,” MammonXL, for following through and wrapping this up. I couldn’t have left things in better bionic hands.