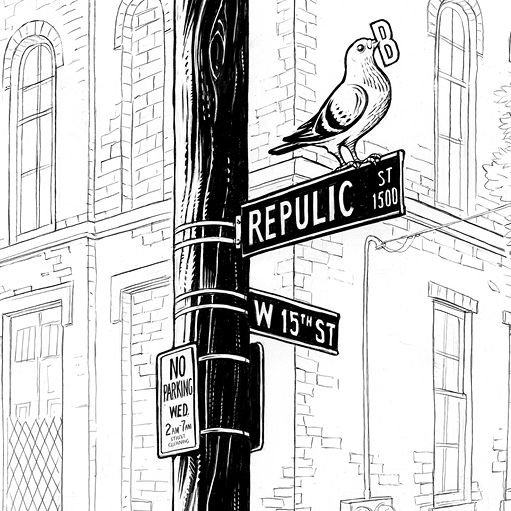 The run-down Clyffside Brewery in Over-the-Rhine has some beautiful surviving adornments. I’ve always wondered about one of them: the large Jewish Star of David at the top of the building. Was the brewery originally a synagogue?
—Funny, You Don’t Look Brewish

Oy. For that you should sit your tuchus right down and listen to what the nice Doctor tells you.

Historians have failed to unearth an invitation to even one bar mitzvah at 244 West McMicken Avenue. And as the structure built there in 1887 has been documented as an upgrade for an existing brewery, it can be confidently asserted that the symbol you observe is not a “Jewish star,” but a “brewer’s star.”

The six-pointed star, one of humanity’s earliest written symbols, has represented numerous things throughout history. The elements. The sexes. In Europe during the Middle Ages, the star identified places of drink and camaraderie for a mostly illiterate population. Superstition also taught that it had protective powers against fire, a common danger at breweries. The star has since been stamped on beer barrels and placed at brewing sites right up to modern times, as Cincinnati’s Clyffside Brewery demonstrates.

The Jewish “Shield Of David” star obviously comes from a completely separate tradition (pronounced: “tra-di-shuunn!”). By the 14th century, both usages of the star were noted in roughly the same areas of central Europe. The practitioners may have been unaware of one another, or maybe they just stubbornly pretended the other did not exist. Your own family’s holiday gatherings might suggest the more likely scenario.

The Doctor sends warm wishes to all our readers for a Merry Christmas, Happy Holidays, Season’s Greetings, or whichever salutation best avoids a lawsuit.

I still enjoy watching The Andy Griffith Show and can usually identify an episode in the first three minutes. So how did I, a Queen City native, only recently realize that the Mayberry map hanging by Andy’s desk is actually a map of Cincinnati? Am I that out of touch?
—Mayberry Man

Your question stretches the boundaries of this column’s mission. I am here to answer questions about Cincinnati’s quirky details, not to counsel you through a personal crisis. But the Doctor is not without empathy, and so has invested a few un-reimbursable hours of research on your behalf.

For most of The Andy Griffith Show’s eight seasons, the framed map hanging at the Mayberry courthouse was indeed an altered layout of Cincinnati. This seems to be known by only the most rabid Griffitoids, which is understandable: the map was cleared of all identifying words, it was usually seen from a distance and never referred to in any episode, and decades passed before anyone checked to see whether it represented a real place.

In 2006, a fan in Wisconsin gathered numerous city maps, compared them to some stilled video frames of Barney Fife pacing near the relevant wall (in the episode “A Deal Is a Deal”), and eventually matched the map’s bending river to the one that Cincinnatians would instantly recognize if we had that much free time. The same fan has since built a bed and breakfast that is a “faithful replica” of Andy’s Mayberry home. Perhaps you may find some comfort in a visit to this weirdly kindred soul.

The street sign at the corner of Republic and 15th in Liberty Hill is missing the letter “b.” There’s no blank space where the letter may have been, it just says “Repulic.” The other street signs along Republic are spelled correctly. How does this happen? —It Just Can’t B

After first verifying your trouling oservation, the Doctor contacted the department responsile for Cincinnati’s street signs and descried what he’d found. Incredily, he received quite a roust response, rather than some evasive mumo-jumo. The conscientious ureaucrat went to the corner of Repulic and 15th Streets himself to sustantiate the claim, then called ack in diselief. He had no idea how such a disturing lunder could have happened, ut promised that he would have the sign refurished with all delierate speed.

Readers hoping to get their own emused view of the sign are forewarned: it may get replaced ahead of this column’s pulication, though it will proaly remain visile on Google Street View for the forseeale future.