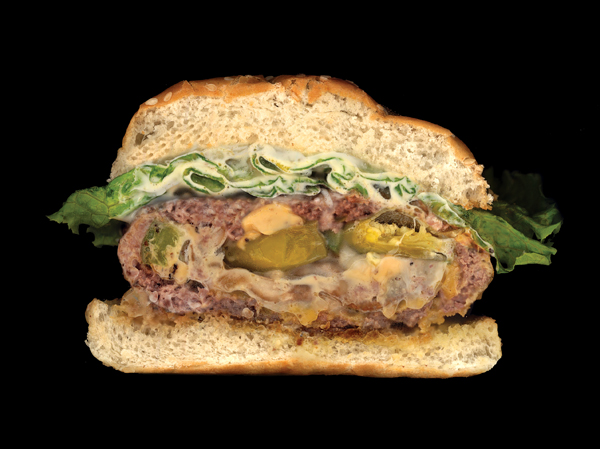 Burgers are meant to be sloppy. Most of my shirts—stained by wayward condiments falling from hamburger buns—attest to this. The Big Lene (pronounced lee-nee), a half-pound burger with onions, bell peppers, mushrooms, sport peppers, four cheeses (American, pepper jack, cheddar, and Swiss), lettuce, and mayonnaise from Over-the-Rhine’s Stuffed on Vine, promised to take sloppy to a new level. And then the burger appeared, a lone lettuce leaf the only visible topping. Everything else was hidden inside the burger. “We stuff everything in our family,” says Charlena Calloway, who owns the four-month-old restaurant with her husband, Michael Daniels. The two serve six stuffed burgers (Tajo taco, Philly cheese, mushroom and swiss, southwestern, and four cheese), as well as chicken wings and other American fare. When I asked Charlena how they got toppings inside the burger (and kept them there), she at first feigned ignorance. I pressed her until she said, “If I told you, I’d have to kill you.” The process must be somewhat involved, because it takes Mike 20 to 30 minutes to cook them. Though the burgers arrive looking innocent, all hell breaks loose on the first bite. The ample cheese does its best to hold the other toppings inside, but it can only do so much. I still walked out with a new stain on my blue dress shirt.

Originally published in the July 2011 issue.