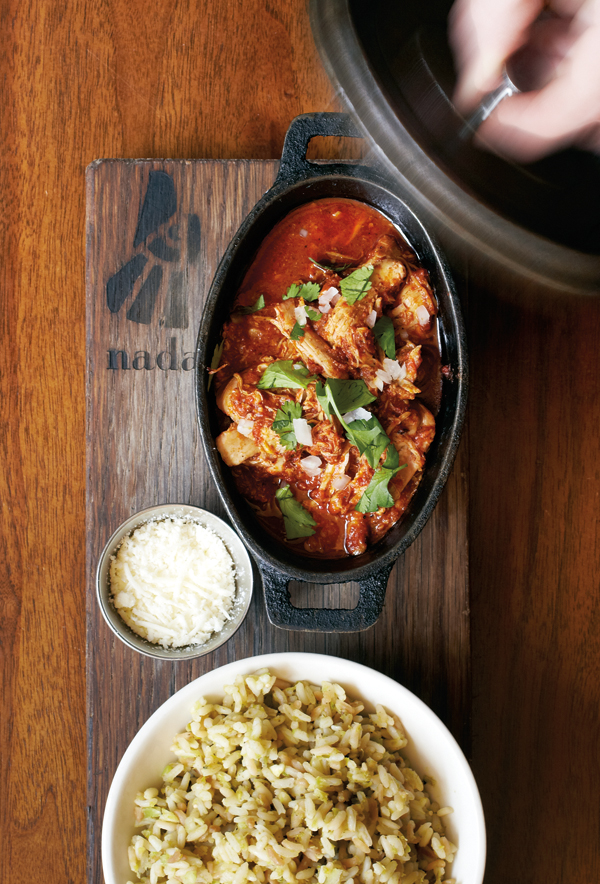 One of the best tables in the city for people-watching resides on the second floor of Nada. It is positioned so that both the sweeping staircase—the nucleus of the bi-level restaurant—and the intersection of Sixth and Walnut are in your direct sight line. During the course of your dinner, whether it be hefty adobo rubbed pork chops and Mexican mac-and-cheese, or botellas of Nadaritas (Nada’s limey, honey-sweet margaritas) and trays of tacos—or both—you’re likely to view a convergence of culture.

If your gaze is outdoors, you’ll watch theater patrons hustle to make the line at the Aronoff’s bar before settling in for the latest touring production of Stomp or Mamma Mia! Across the street you can peer into the world-renowned Contemporary Arts Center, and if you’re lucky enough to be watching during an opening night party, you’ll probably see a single-named DJ such as Dope or Epic or Halo mixing tracks amid urban art installations while yoga-toned bodies in LBDs sip craft cocktails prepared by a celebrity mixologist.

But if your eyes are trained indoors, the staircase is cinematic. On a recent Saturday night we snagged a 9:30 reservation, the only one available during the 5 p.m.–midnight “dinner hours.” As we sipped an overly sweet caipirinha (someone has a heavy hand on the agave nectar) and a very fruity chile mango margarita (nice bite, but more novelty than solid cocktail), we couldn’t peel our gaze away from the endless parade of statuesque women negotiating the stairs in towering heels, a voluptuous cavalry deployed to disrupt conversation. Tonight, like many Saturday nights in the three years that it’s been slinging tacos, Nada is the most bachelorette-intensive restaurant in the city.

“Food is probably fifth on the list of why people love to go to Nada,” David Falk tells me in a phone conversation. The 35-year-old owner and president of Boca Restaurant Group neatly hurdles whatever those first four might be by quickly adding, “I mean…we love hospitality.” What I think he means can be illustrated by a question asked of all potential Nada employees: “Would you be more likely to go to a party or throw a party?” According to Falk, if they are partygoers, “we don’t hire them.”

Where Nada’s more serious older sibling Boca is esteemed for its sensuous Mediterranean dishes, lusty wines, and hyper-attentive, choreographed service, the combination of Mexican cuisine, easy informality, and a rockin’ outdoor patio assigns Nada the role of the much hipper younger brother—the one more likely to throw a party. But as Falk tells it, it’s a party that came with “a shitstorm of opposition.”

The seed for Nada was planted in 1995 while Falk was working in Chicago. Rick Bayless—chef/owner of Frontera Grill and Topolobampo, renowned for putting a modern spin on regional Mexican cuisine—had just won the James Beard Foundation Award for National Chef of the Year. Chicago restaurateurs and chefs flocked to Bayless’s restaurants, including Falk. “I immediately thought Cincinnati would be a great market for this style of restaurant.”

Falk was three years into Boca when he began to lay the groundwork. What he wanted was a little taqueria, a place that served “Mexican food that wasn’t Don Pablo’s.” It had to have two things: lunch hours, and a “kick-ass patio.” Falk came close to settling on a 1,300-square-foot space on Edwards Road, and when that fell through, considered a 3,500-square-foot building in O’Bryonville that had most recently housed The Brickyard. Then Mu Sinclair, Boca Restaurant Group’s financial guru, called to tell him that Bella had closed and he should look at the Sixth and Walnut site. Though the layout of the space was flawed, Falk loved the “fun and energetic” location. Now that the little taqueria had grown to 7,000 square feet, it was a whole new ballgame. Beginning with the fact that Falk’s investors thought a Mexican concept was the “worst idea [they] had ever heard.”

Falk fled to Arizona, sequestered himself in a hotel, and vowed not to come out until he had figured it out. It was a phone call from Mu Sinclair’s wife Robin advising him not take on anything he wasn’t absolutely passionate about that was the game changer. Falk returned and Nada got underway.

As suggested by the different decor (unadorned wooden furniture and planked flooring on the first floor; sinewy banquettes, vibrant artwork, and contemporary lighting on the second floor), the original plan for Nada was to have two separate menus: a cantina style on the first floor serving  antojitos (appetizers) and a higher end, large plate menu on the second floor. Instead, Falk, his right hand man Jono Fries (who is also V.P. of Boca Restaurant Group), and executive chef Mike Henson—a.k.a. “Big Mike”—tossed out half of each and condensed the two into one menu, which has largely remained unchanged since the 2008 opening.

Hand-held food—tacos and appetizers—makes up the majority of the menu and consistently delivers the best dishes. This is not taco hell, with U-shaped crisps heaped with ground beef and yellow shredded cheese. Instead, expect the real deal: soft, warm tortillas folded over braised pork (carnitas), short ribs (barbacoa), grilled chicken, batter-dipped and fried mahi mahi (available grilled if you ask), crisp pork belly, poached shrimp, and bean with portobello mushrooms. Each has companion ingredients—perhaps a little pickled onion and cilantro or guacamole, or a bit of pico de gallo and Chihuahua cheese (a soft white Mexican cheese similar to Monterey jack)—and nearly all of them benefit from a spritz of fresh lime.

The barbacoa makes another—and arguably more memorable—appearance in the sopes, my single favorite dish on Nada’s menu. The braised short rib is mounded on top of two small masa cakes, sluiced with smoky chipotle salsa, cotija cheese (a hard, salty cheese similar to feta), and striped with crema (Mexican sour cream). Nada’s menu is not a cerebral one, which dovetails perfectly with the lusty, fun atmosphere Falk & Co. have created. In addition to the wicked good sopes and the divine mac-and-cheese infused with roasted poblano, Nada’s Angus beef sliders have just enough jalapeño heat to qualify for a south-of-the-border-inspired menu (and the steamed onions are a nod to the original). Be sure to check out the oyster shooters—a bluepoint oyster bathed in sangrita (a blend of lime, orange, and tomato juices) with a jalapeño kick.

While Boca matures towards its 10th birthday (in restaurant years that equals 50), Nada’s earnings have handsomely exceeded its projected annual revenue, and Falk is gearing up for his next excellent adventure in the former Maisonette site. Whatever that may be, we’re sure Falk will do it his way.

Originally published in the July 2011 issue.