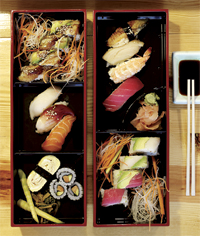 Yukio Fukunaga, the owner and head chef of Ko-Sho Restaurant in Northside, used to prepare his signature sukiyaki in the traditional Japanese fashion: at the customer’s table. “The idea is, you eat, and talk, and drink, and it’s a long meal,” he says. Call it American haste or our penchant for burning the thinly sliced beef that anchors the dish, but when Ko-Sho relocated to Northside after 12 years downtown, Fukunaga took preparation of the dish back into his own hands. The result is fantastic. The tender beef (or chicken), Napa cabbage, green onions, enoki mushrooms, bamboo shoots, and kale, are all served with noodles in a hearty soy-based broth in a single bowl. An empty bowl and three large utensils—a steel strainer, plus one large and one medium spoon—accompany the dish, leaving the customer with at least a shred of control over how it’s consumed. Thing is, the longer, customer-prepared version would likely go over well in the avant-restaurant hub of Northside. The small, square room, with floor-to-ceiling glass facing the street, has a distinctly casual I-could-sit-here-all-night feel. Granted, my two friends had slightly differing opinions about the inattention to detail that dotted the interior (crooked paintings, a plastic bag covering a planter, wilted wildflowers on the tables), but both agreed that they would return for the quality food. The Ko-Sho box dinner featured some of the best grilled salmon and tempura vegetables I’ve had, and the sushi was deliciously sticky and fresh. Mr. Fukunaga, trust us, we’ll sit and eat and talk and drink until you turn the lights out.

Originally published in the June 2010 issue.