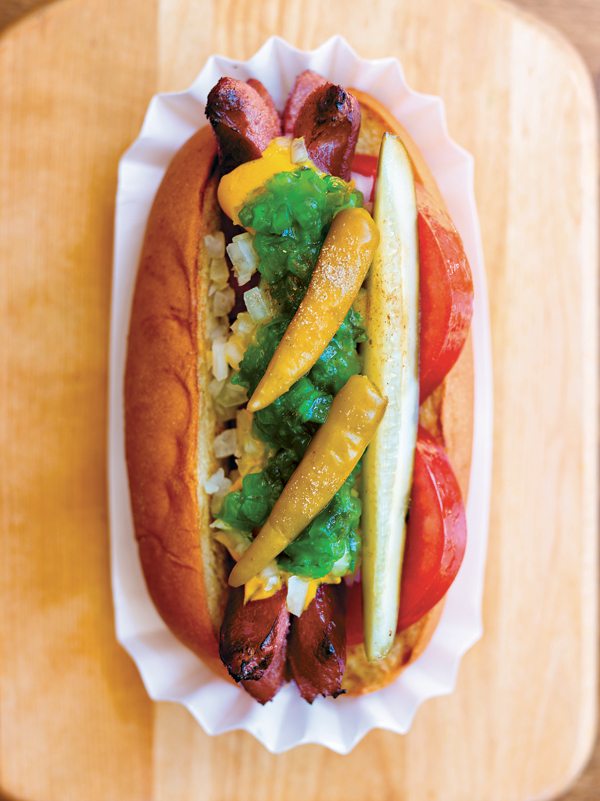 What New York City chef David Chang did for the humble noodle when he opened the original 27-seat Momofuku noodle bar in the East Village, chef Daniel Wright and his wife Lana (who serves as general manager) hope to achieve with the hot dog at Senate in Over-the-Rhine.

Like Rick Bayless with regional Mexican and Wolfgang Puck with gourmet pizza, David Chang has become synonymous with dressed-up versions of street food and hangover dishes. With four more successful restaurants under the Momofuku brand since the 2004 original (and two Michelin stars to hang his toque on), Chang’s inventive fare has ambitious chefs and restaurateurs around the world trying to replicate his success by building their own Momofuku-ish restaurants. And down to the noisy, narrow, bare bones interior filled with groovesters clamoring for a seat at the bar to wrap their palates around street food with attitude, Momofuku was clearly on Daniel Wright’s radar when he was designing Senate.

The first thing you notice is the art-less walls. No miniature canvases by local artists with inflated price tags; no oversized bold experiments by owners high on a creative streak after a 15-hour day of inhaling construction dust and one too many Belgian beers. Like much of the renovation going on in The Gateway Quarter and Over-the-Rhine, you can see the influence of Urban Sites’s Bill Baum, though it was Keith Hall of MSA Architects who gave Senate much of its urban industrial chic: exposed brick, shelving and cabinets constructed from some of the original pine flooring, what used to be an arched doorway to the building next door reconsidered as a focal point for shelves holding white candles.

The bar—an impressive solid block of polished concrete—is lined with backless stools and lit overhead by a row of hanging globe lights wrapped in fish netting. Much like everything else about Senate, these fixtures strike a balance between turn-of-the-century and contemporary cool. Even the back bar is devoid of clutter: Except for orderly rows of liquor and glassware, the only objects to grab your attention are a couple of flat screen televisions and a long, slim mirror running the length of the bar. Overall, the deliberate minimalism is a smart choice—it maximizes an otherwise small space, allowing the focus to be on people and food. And since Senate’s opening in mid-February, the people hath cometh in droves for hot dogs.

Yes, hot dogs. According to Daniel Wright, he’s dishing them up to the tune of approximately 500 a week. And why not? You can get a decent burger at every diner, dive, and bistro (and you can get one at Senate as well). Who doesn’t love a good dog? Besides, these aren’t your nitrite-loaded ballpark wieners. Though, let’s be frank, gourmet hot dogs are not an innovative idea. Places like Hot Doug’s in Chicago—clearly another of Wright’s inspirations for Senate—have been attracting a host of fancy dog lovers for years.

Senate’s veritable litter of a half-dozen dogs are a messy indulgence of taut, all-beef, natural-skinned weiners that provide a distinctive snap when bitten into and are pimped out with luxe, designer toppings like house-made kimchi, braised short rib, and pickled cucumber (the Korean); wasabi mayo and Japanese slaw (the Hello Kitty); or wrapped in bacon with American cheese, coleslaw, and crushed Grippo’s (the Trailer Park).

Big dogs, these are. Knife and fork dogs. Just try wrapping your jaw around the Croque Madame, a hefty all-beef dog buried under black forest ham, béchamel sauce, and a poached egg. I tried, and ended up wearing a good portion of it home on my shirt. If you’re a fan of rich excess, this dog is for you.

But for my money (nine whole dollars, to be exact), the best in show is the signature Chicago dog (as a Chicago native, I’m sure Wright is required by blood oath to serve an authentic version). As much as I bark about chefs serving tomatoes out of season, in this instance, I’ll let it slide. Together with the customary sport peppers, chopped onion, neon relish, celery salt, mustard, and dill pickle spear, the richness of the plump, beefy dog benefits from the cool acidity of tomato slices (in all fairness, Wright’s were at least red instead of pale orange).

The only objection? The bun. A brioche style bun made by local Giminetti Bakery, it’s well suited to soak up the wet slaws and sauces of the other dogs on the menu. But the dry-ish egg bun neutered the Chicago dog. Maybe we’ll have to sit up and beg for the traditional softer poppy seed variety. (OK, enough with the dog puns—I know when to heel.)

Other culinary traditions bob and weave throughout the rest of the menu, most notably the mussels steamed in a fabulous spicy charmoula sauce (tomato, saffron, garlic, and herbs with a sriracha kick) that required bread to sop up every last drop before we could surrender the bowl to the server; a Lyonnaise-style salad (listed as “bacon + egg” on the menu) of frisee tossed in a tarragon vinaigrette and topped with smoked bacon, fingerling potatoes, and a poached egg; and a variation of the French-Canadian hangover breakfast known as poutine.

Similar to the states’ disco fries or cheese fries, Senate’s poutine fries are topped with cheese curds (Wright uses the fresh curds from Bellefontaine-based Blue Jacket Dairy) and gravy. But why stop there? Wright heaps on an extra serving of debauchery in the guise of braised shortribs as tender as your grandmother’s heart. Just to be clear: This is a full-bodied dish—one order for the table to share is ideal. Better yet, order the crisp, chubby batons of truffle or duck fat fries freckled with thyme as a side to the Angus burger with caramelized onions on a brioche bun with one of the craft or “local heritage” beers (Burger and Hudy 14k, rebranded). The virtuous—or vegetarian—among us might try the simple and refreshing salad of arugula, avocado, fresh mozzarella, basil, and balsamic and Dijon vinaigrette.

Though some dishes or dogs may not rock your palate, most of the menu’s shortcomings are concentrated in the three featured desserts: a delicate crème brûlée overdosed and overpowered by Irish cream liqueur; a leaden chocolate bread pudding; and warm cinnamon and sugar coated pretzel beignets. Although good on their own, the watery, bland crème anglaise served as a side for dipping needs some attention. Since desserts don’t seem to be the chef’s strong suit, perhaps borrowing Momofuku’s simple approach of serving small cones of soft serve ice cream is in order.

Senate seats approximately 50 people inside, including the bar and a communal table for 10 in front of the small open kitchen. Given that the aisle between bar and tables is nearly impassable (which discourages standing and chatting in the path of servers), seating is nearly mandatory and at a premium most evenings. The coolest features in the place are the restaurant’s accordion windows, which allow the glass facade of the building to fold open, weather permitting, accommodating another dozen or so people on the patio (and providing a nice breeze through the restaurant on several recent visits). Think of it as a gateway to the Gateway Quarter, and an exciting example of what’s in store for OTR.

Like its name suggests, the Wrights have created Senate as a place to convene, deliberate, and indulge, a restaurant of neighborhood cool where (hot) dogs rule.

Originally published in the June 2010 issue.