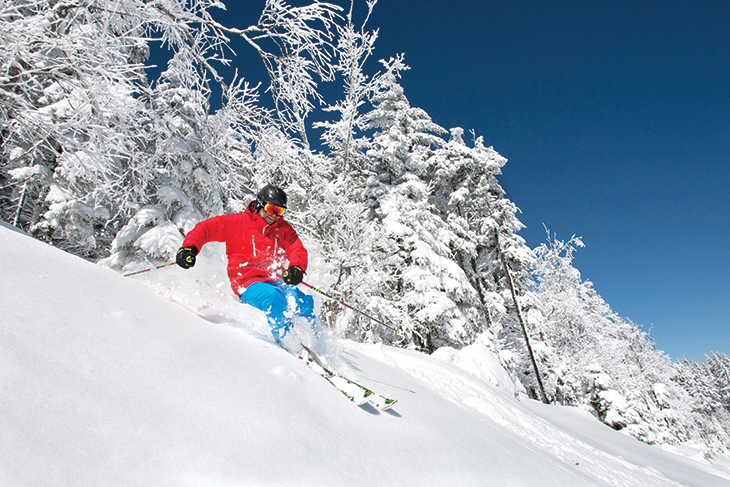 Get Started
Whether you’re still gaining momentum as a downhill racer or you’re completely new to the sport, Winterplace is a great option for learn-as-you-go skiing. An Allegheny classic since 1983, the resort was recognized as the best place to learn to ski in the Southeast by Blue Ridge Outdoors magazine, featuring special Learn-to-Ski and Learn-to-Board packages for would-be winter sport enthusiasts of any age. Hone your skills in a friendly atmosphere where taking on first-timers is a point of pride for employees. You’ll get help with everything from turning to trail signs, and they’ll even cover how to hop on chair lifts without bailing. Winterplace offers “trails for everyone,” says resort president Terry Pfeiffer—27, plus two terrain parks, two Super Carpet lifts (those are ground-level conveyor belts, like moving sidewalks in an airport), and a serious multi-lane tubing slope. Whatever your skill level, pick a trail or slope and get going—there’s plenty of miles to log.

Ramp It Up
If you don’t know what tree skiing is, then you might want to go with a slightly more intermediate resort (or at least check Wikipedia first). But if you’re looking for something a little more specialized—like, ahem, dodging lots of actual trees while hurtling down a mountainside—then Timberline Four Seasons Resort in Davis, West Virginia, can take your ski trip to the next level.

Tree skiing (also known as glade skiing) is Timberline’s specialty. Coast along the resort’s Salamander trail, a meditative, two-mile run that courses through the Dolly Sods Wilderness. Or get down to schussing (a speedy run straight downhill) on one of the two double-black-diamond trails. With 39 distinct trails and a wilderness area to choose from—not to mention the highest average vertical south of Vermont—Timberline unites skiers and snowboarders alike, all in the name of panoramic Canaan Valley State Park views.

Go The Distance
If you’re looking for an all-around resort experience that extends beyond powdery vertical drops, then Snowshoe is the complete package. In addition to competitive downhill skiing, boarding, tubing, terrain parks, nighttime snowmobile and RZR tours, and a climbing wall, Snowshoe also has a village for après-ski nightlife and family activities. The resort is a full-scale “island in the sky,” where anything you’d want to see—including a quaint chapel—is neatly nestled at the mountaintop. Plenty of shops, more restaurants than you could hope to visit in a weekend, and even a convenience store lie within walking or shuttle distance of the lifts. And if you’re hoping to win friends and influence people, try skiing right into the condo lodging. You’ll look pretty cool.

According to those on the ground, Snowshoe is the 500-pound gorilla of West Virginia skiing. But this big presence doesn’t mean strictly advanced slopes. In fact, the resort—now celebrating its 40th anniversary—is mostly intermediate level and equipped with 14 lifts and 57 trails, making it the Southeast’s go-to option for a range of winter sporting skill levels. Alongside all those pros, Snowshoe makes a point to educate the next generation of skiers and boarders. The resort uses basic terrain-based instruction for total newbies (read: kids), resulting in more control and fewer wipeouts. And that’s better for everyone.