You could fly to Florida for a cold-weather getaway, or you could go underground. It’s a balmy 54 degrees year-round in Mammoth Cave, and you don’t have to go far to see this world-famous attraction: The drive from Cincinnati clocks in at just over three hours. 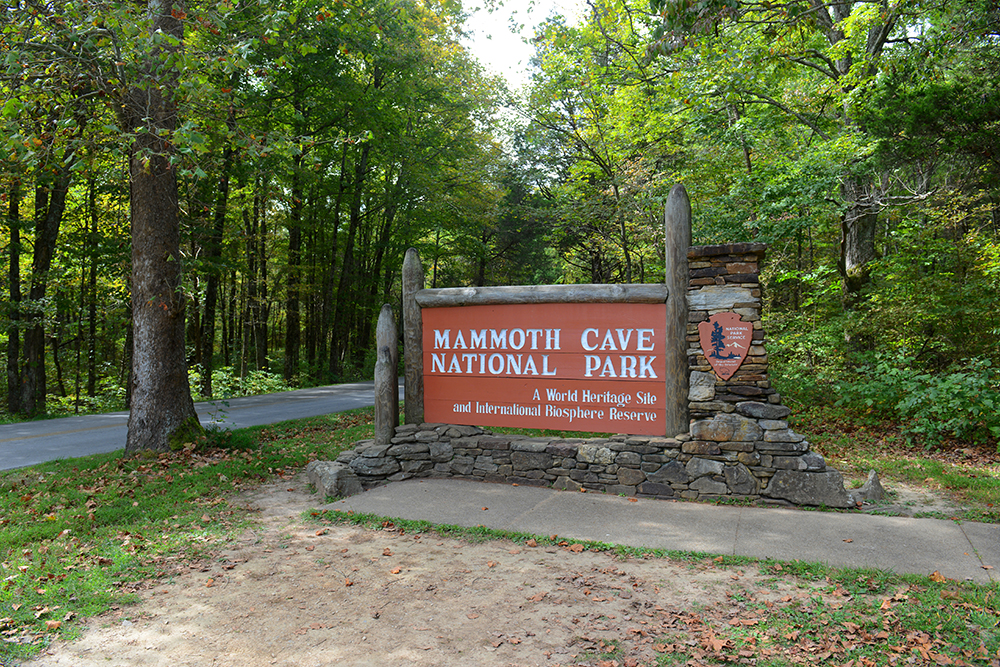 What To Do
Early cave guide and explorer Stephen Bishop called Mammoth Cave “a grand, gloomy, and peculiar place,” which would explain why humans were exploring it for 4,000 years before it was “discovered” in the late 1700s. 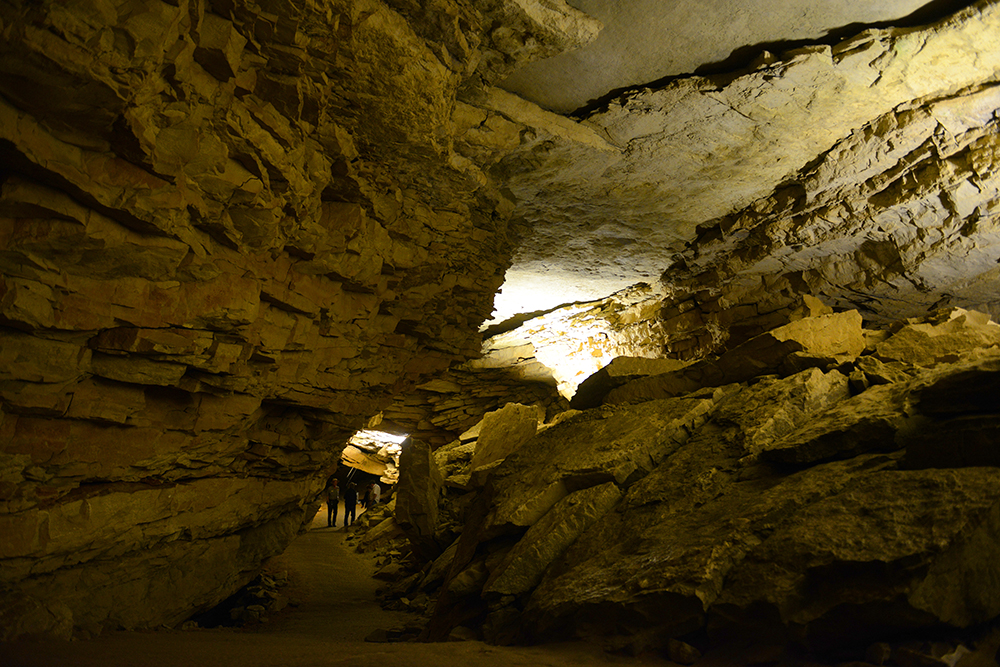 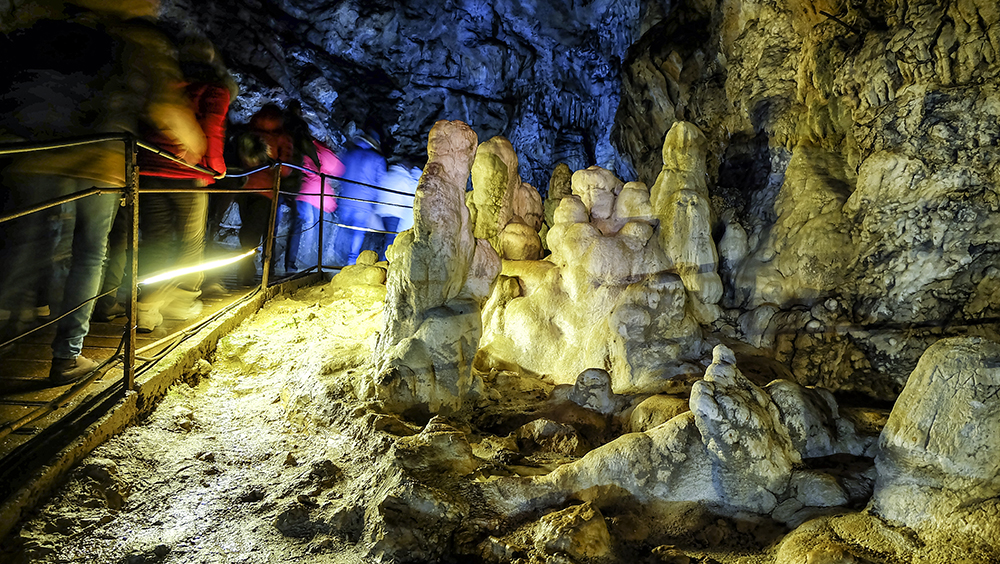 The longest known cave system in the world, Mammoth Cave is a UNESCO World Heritage Site (there are just 23 in the U.S.), recognized for its huge chambers and vertical shafts. It’s a “dry cave”—that is, much of the interior is insulated from dripping water, so those famous formations are few and far between. But when you do come upon them, they’re astonishing. Case in point, The Frozen Niagara. It’s just what it sounds like: A massive super-slow-motion waterfall of minerals that seems almost too incredible to be real.

Mammoth Cave’s public schedule changes with the seasons, and certain tours (like the Violet City Lantern tour, which we highly recommend) are only available during specific months. The winter calendar runs through March 22 and offers 10 tours of varying difficulty, from the easy Mammoth Passage Tour to the “very strenuous” Grand Avenue Tour, which includes “narrow canyons and steep underground hills.”

We took the Domes & Dripstones Tour, which offers a little bit of everything with only fleeting moments of claustrophobia. It starts with a short bus ride from the Visitor’s Center to the historic entrance, then a dramatic descent into the cave itself. About two hours in length, Domes & Dripstones includes 500 stairs (this tour is rated as “moderate” on the difficulty scale, but our 3-year-old did just fine), and there are frequent stops to sit, look around, and allow people to catch up.

It’s important to know that even on so-called easy tours, guests are still responsible for moving about the cave passageways and stairwells in a relatively timely manner (and as a general rule, things like walking sticks and backpack-style baby carriers are not permitted). The Accessible Tour, however, allows mobility assistive devices and takes a very small group on a half-mile trip with no stairs. 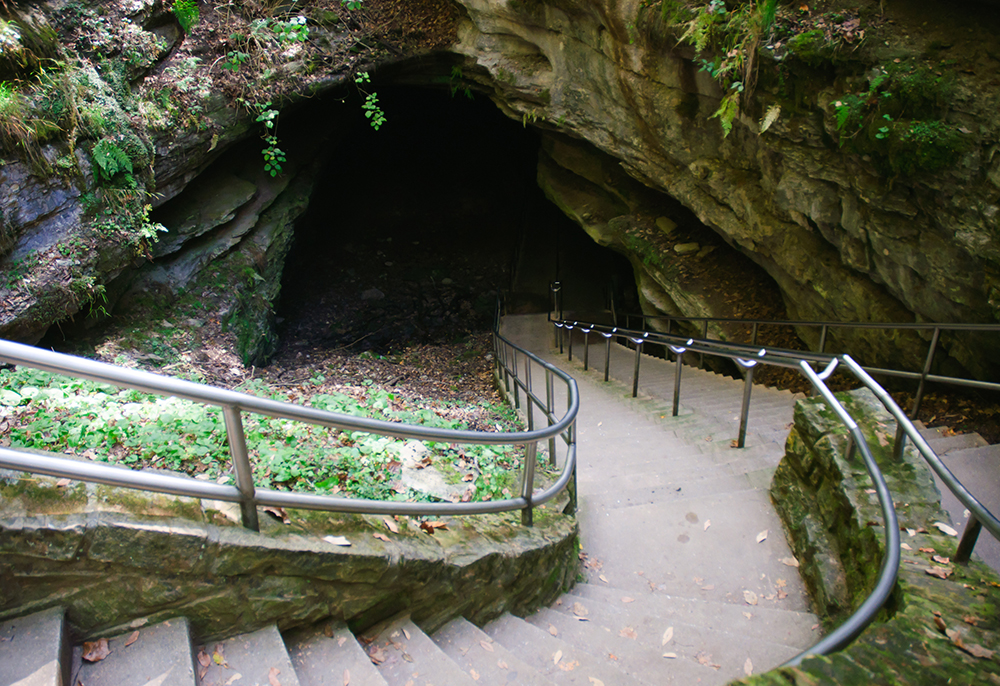 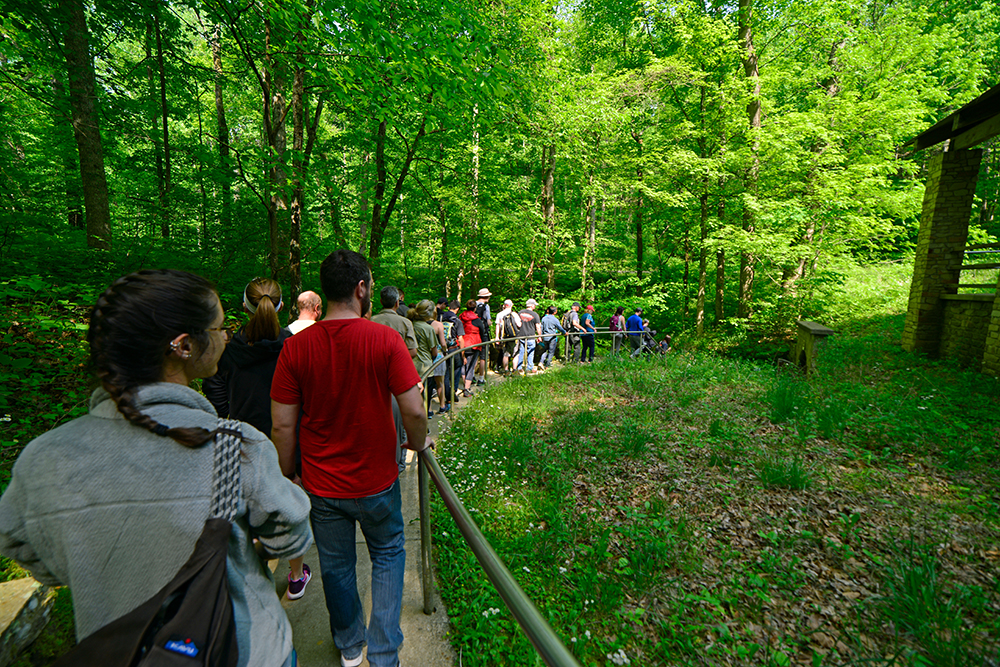 Maybe the most important tip we can leave you with is this: Book a reservation online. All tours accept walk-ins, but they can fill up weeks in advance. Mammoth Cave is one of the country’s most popular tourist destinations, so plan accordingly.

Where To Stay
If you’re looking for proximity to the caves and attractions, then you can’t do much better than The Lodge at Mammoth Cave. Located near the Visitor’s Center, this property features spartan (but cute!) cottages scattered in the woods, and feels more like a grown-up summer camp than a lodge. And starting at $71 a night, it’s one of the better values in town. There’s also a main building with more traditional hotel-style rooms, plus on-site gift shops and concessions. 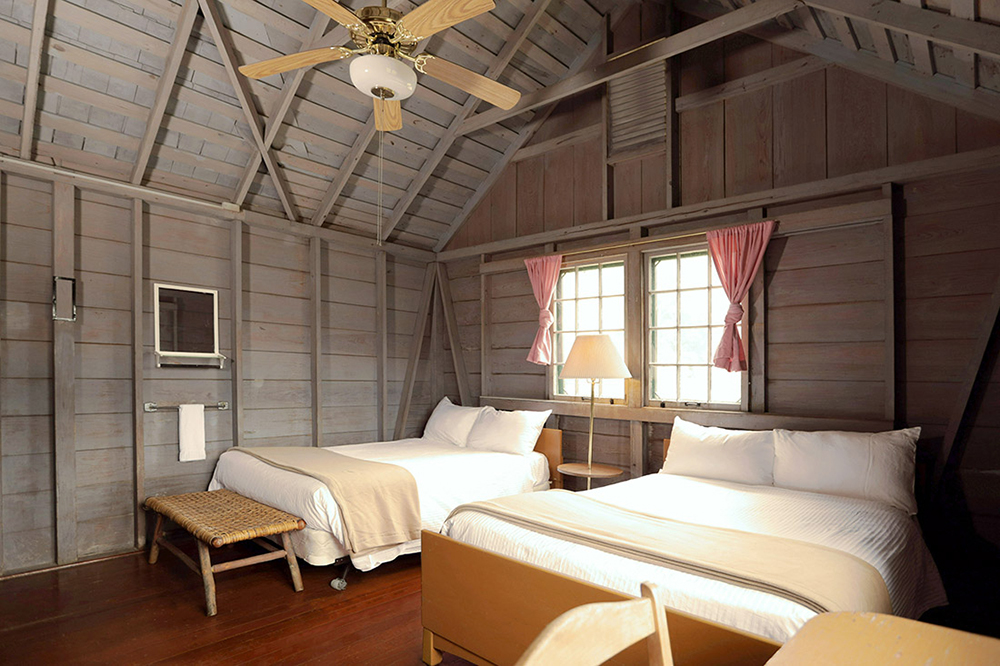 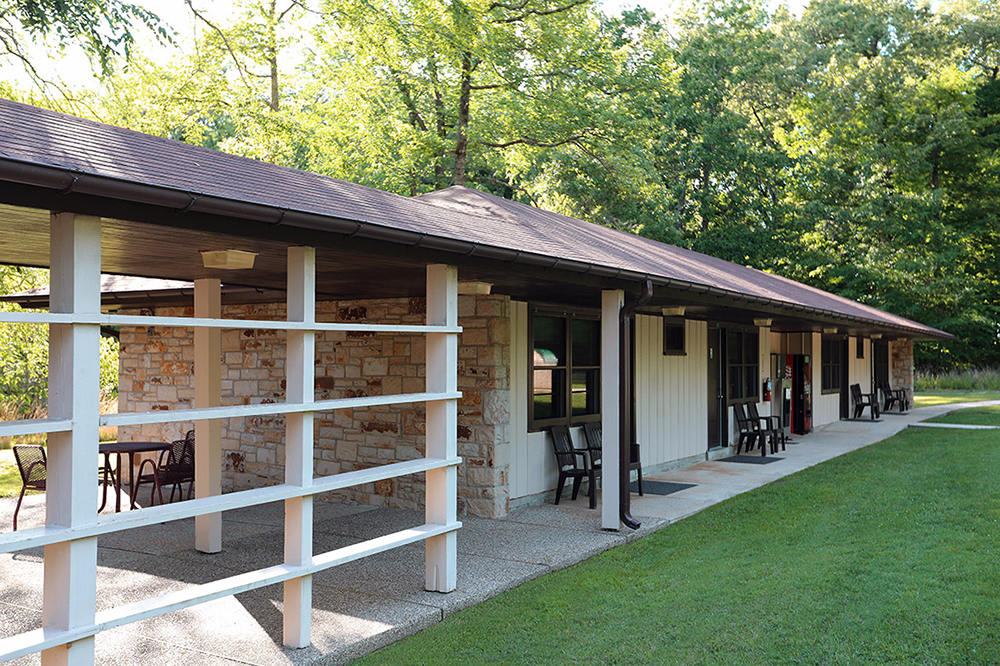 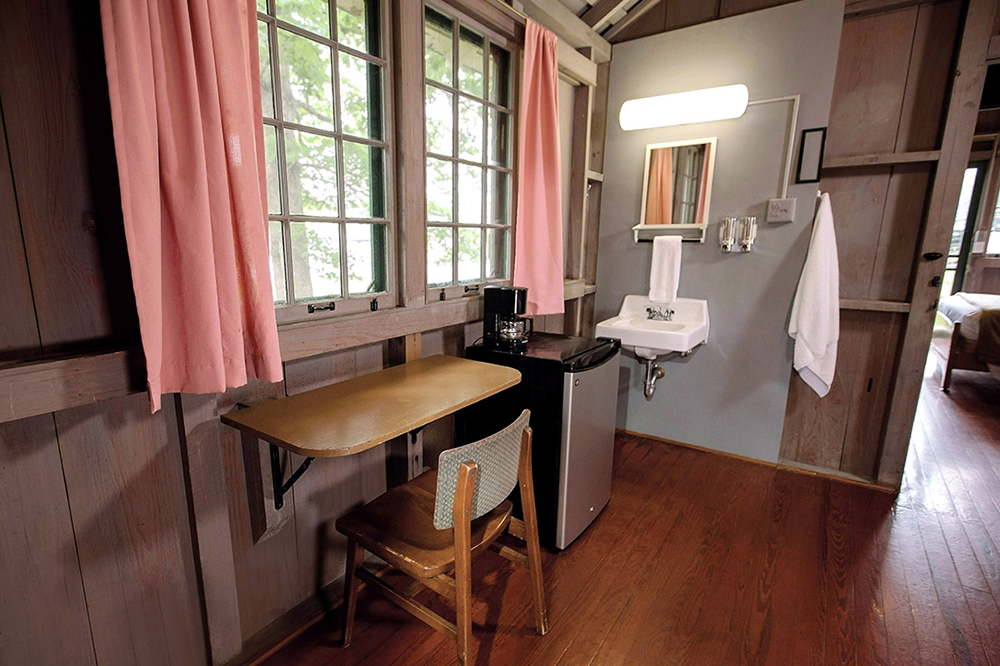 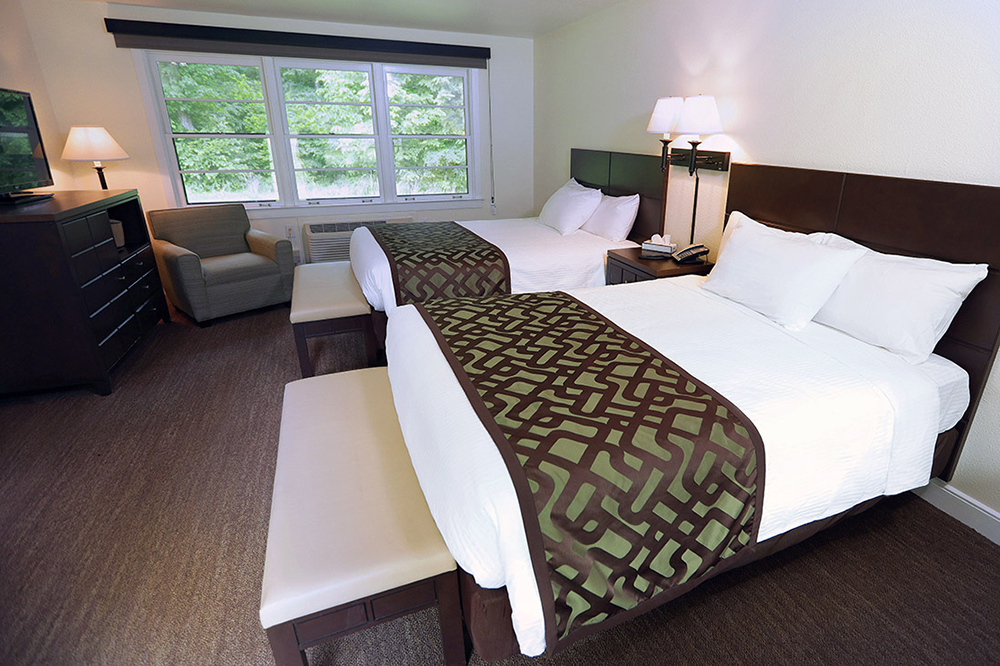 Mammoth Cave truly does have something for everyone, from aboveground nature walks to the “Wild Cave Tour,” a six-hour climb and belly crawl in virtual darkness (no kidding—bring knee pads). No matter what you’re looking for, if you have a Bucket List, Mammoth Cave should be on it. 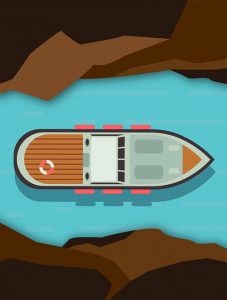 Float Your Boat
Lost River Cave tours are a great introduction to cave exploration.
If you want to augment your Mammoth Cave experience (or simply replace it with something a bit more…sit-down), then look into the Lost River Cave boat tour. It’s way less strenuous than pretty much anything in Mammoth Cave (there’s a short stroll to the cave entrance, you sit for most of tour, and duck a few times to avoid a low ceiling), and it’s perfect for those who want a little adventure but maybe don’t care to go fully underground. Located in Bowling Green, Kentucky, just a 30-minute drive or so from Mammoth Cave National Park, Lost River Cave tours are a quick 45-minute boat trip down a shallow river passageway and just a little taste of all that caves have to offer. lostrivercave.org